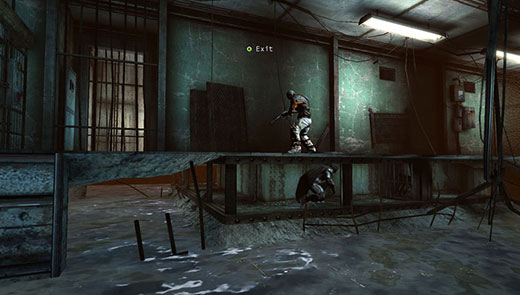 LOW You want me to collect 5 hostages right before the end? Really?

WTF How did this map system ever get approved?

Perception is a strange thing.

When I first saw Blackgate

at a developer demo, I thought it looked great, but there wasn't much chatter in the critical sphere afterwards and we weren't sent a review copy – often, an omen of a title being sent out to die. Other reviewers I knew hadn't bothered to play it, and the early scores from those that did weren't favorable. One major site even awarded it a scathing 3/10.

Based on its lack of buzz and rapid price drops, Blackgate seemed to be D.O.A. and I went into it expecting the worst. But, despite a few errors in design, I was pleasantly surprised to find a solid title with a new spin on the Batman formula. This was definitely one instance when the negative perception of a title wasn't an accurate reflection of the reality.

While still an Arkham game in every way that counts, Blackgate shifts away from the recent open-world style on consoles and presents the adventure as a 2D sidescroller, though the levels are still designed in 3D.

Batman can only travel left or right, but when he comes to corners or ducks into air vents and such, he "goes around" and the entire screen shift perspectives. The camera always shows everything from the side, but the way it jumps between different planes existing in the same space is quite nifty. Batman can also shift between the background and foreground in certain areas, and he's often able to dynamically cross between planes with his grapple gun. It's a great effect that enhances the depth of the world while retaining the simplicity of a 2D game.

Unfortunately, the developers stumble hard when it comes to the map. Blackgate has a heavy Metroidvania slant — gamer shorthand for backtrack-heavy titles designed to keep certain areas inaccessible until the player finds the correct item. For some insane reason, the map is shown from an overhead perspective, despite the fact that levels are only ever seen from the side. It's disorienting and hard to mentally translate, it fails to show different elevations, and doesn't show how parts of the world are connected. I can't understand why a better map from any number of similar games wasn't copied.

That failure aside, I do give credit to Armature for crafting some genuinely interesting environments. While there are a few too many dull hallways that could've been cut, snaking my way through a swiss-cheese wall of prisoner cells or grappling from a ledge to a tower while the world swings to re-orient were just a few brilliant moments among many, and in general, traversal in Blackgate feels richer than simply walking or gliding from rooftop to rooftop. It's a clever way of dressing up an old structure, and it works well.

However, while it looks and feels great to run through Blackgate, the developers kneecap themselves again when it comes to the pacing. In another strange ‘what were they thinking?' move, the game requires players to examine each environment with a finger-scan via the Vita's touchscreen before key points will show up in Batman's "detective vision" mode.

Without taking the time to comb each environment with screen-swipes, the detective vision won't show any hidden results. Players who aren't meticulous will end up walking right past important objects or places and be unable to advance the action. I have no problem with requiring a little more effort at times, but in order to avoid missing key things, the player needs to scan every screen's worth of real estate in the game, and it slows progress in new areas down to a crawl.

Looking towards the famously-smooth combat the Arkham games have become known for, taking out the trash in Blackgate is a simplified approximation of the trademark counter-heavy melee. Batman only has to worry about working two sides (left and right) instead of fending enemies off from all around, and gadgets don't play as large a role, which is just fine by me. Fights aren't nearly as intense, but since the game places less emphasis on fighting and more on exploration, it all evens out.

While knocking out low-level thugs is fine enough, Blackgate's boss battles are a big checkmark in ‘plus' column. Although they depend on pattern recognition and fast reflexes, Armature did a very smart thing by incorporating environmental puzzles into these encounters instead of simply buffing the baddies up to a level that doesn't make sense.  For example, the insanity of Blackgate's Joker makes him a wild attacker, but he's not superpowered the way he was at the end of Asylum. The same goes for one of Batman's lesser-known foes, Deadshot. His boss fight in Origins was a ridiculous mess, but here it makes sense and fits the character. This sort of fidelity to the comics is valuable.

While Armature definitely made a few bad calls when putting Blackgate

together, I greatly enjoyed this new style of Batman, and didn't have too much heartburn over the rough patches.  This 2.5D stuff is headed in a great direction, and with a little bit of polish and some tweaks, the sequel (if they're fortunate enough to make one) should be absolutely fantastic. Until then, I've got no problems recommending the current iteration at all — just be ready to wrestle with that ridiculous map every now and then. Rating: 7.5 out of 10


Disclosures: This game was obtained via rental and reviewed on the Vita. Approximately 8 hours of play were devoted to the single-player mode, and the game was completed. There are no multiplayer modes.

Parents: According to the ESRB, this game contains: Blood, Mild Language, Mild Suggestive Themes, Use of Tobacco and Violence. Catwoman makes vague advances, some of the bad guys smoke, and I'm assuming there's some salty language, even though I can't honestly recall any. However, none of these things are very explicit, and the level of violence is what one would expect for the superhero-themed play – some guns and a whole lot of punching.

Deaf & Hard of Hearing Gamers: When scanning for important items in environments, small clues can sometimes be obscured by the finger doing the scanning on the touchscreen. There's an audio ‘PING!' that helps with this, so players with hearing issues will have to be extra vigilant. Otherwise, all dialogue is subtitled and there are no other auditory cues vital to gameplay.

I am glad this is coming out for last gen consoles so that I will actually be able to play it.