The Kid Rages for a While 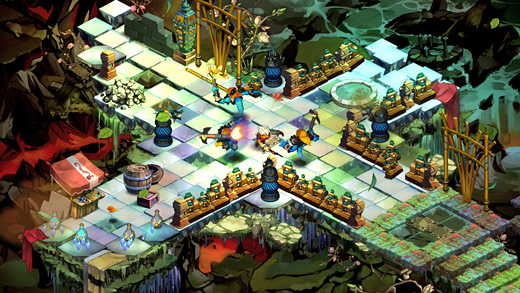 HIGH Starting New Game+ and plowing through everything.

LOW The almost-but-not-quite quality of the story.

WTF The eleventh-hour appearance of a jump function.

To me, the best games are a perfect combination of tactile exercise and mental engagement. My actions must be enjoyable and exciting, and there must be a reason, intellectual or emotional, for me to perform them. I can certainly appreciate one or the other on its own, but this marriage must occur for a title to be truly great.

, the inaugural effort from developer Supergiant Games seemed to have the potential to be one of these memorable convergences. At its core, it's a third-person action game, fairly described as a bit of a hack-and-slasher with a nifty narrative spin. In this case, however, one half of the marriage carries far more weight than the other, and the result is disappointingly uneven.

Where Bastion excels is its polished, intuitive combat.  It's a little odd to say since the actual fighting is straightforward attack-block-attack taking place in mostly-linear areas, but my interest in the samey skirmishes was maintained by the wealth of weapons to be collected, both melee and projectile.

This variety in Bastion's arms is definitely something to admire. Everything including the flamethrowing bellows, the long-reaching spear, the speedy machete and the devastating rocket launcher (just to name a few) has ten different upgrades that can be unlocked and employed, although no more than five can be active at once. This forced choice changes how each weapon works and delivers a variety of effects to experiment with. It's clear that a lot of time and care went into the creation of these weapons, and it paid off.

The other technical aspects of Bastion are equally refined. The controls are pleasantly smooth and all of the systems (such as the menus, the in-game achievements, and the challenge courses) are elegantly crafted and simple to understand—in fact, many games could take a lesson from the sharp level of user-friendliness here. It's so smooth to play that it's almost as if my body were hardwired to know what to do before I ever pressed start. I encountered no learning curve, my hands were instantly in sync with the action, and I never met any barriers to progress. Bastion is a game that cries out to be played. 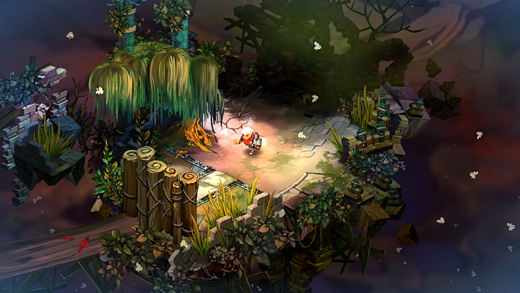 However, as I mentioned earlier, both halves need to contribute equally in order for a game to achieve greatness, and the combat and weapons are only part of Bastion. Supergiant's efforts on the conceptual side don't fare quite as well.

Bastion's big hook (as players will discover immediately upon starting) is the presence of a narrator whose voice is a constant companion from beginning to end. The voice actor does a superb job, and I found myself looking forward to hearing what he would say next, especially since many of the samples related directly to the actions I was performing on-screen. If I burned all of the bushes in a certain area, he commented on it. If I ran away from a group of enemies instead of dispatching them, he mentioned that as well. This approach to narration is relatively unique (at least to this degree) and it did add a special quality to the game. However, the other characters and the story itself aren't nearly as engaging as the narrator.

The main character, The Kid, never speaks a word—he's just a cipher used as a means of employing the weapons. The supporting characters add precious little emotional value since they're flat text-givers with barely anything to say, not even having voice actors until a few minutes before the game is over. The plot holds promise but never amounts to much. Partly it's because the narrator keeps players at a distance by telling what's happened (outside of combat) instead of letting players experience it themselves, and partly because the "story" is more like a quickly-sketched outline of events instead of a fully-fleshed narrative arc.

As a result of these factors, I never felt significance or weight from the plot, nor did I ever feel involved with what was happening. It was easy enough to cruise through level after level thanks to the silkiness of the production, but there was no suspense or even curiosity about what was going to happen next. Events occurred, I pushed on, and it wasn't until Bastion's final scenes that I began to get a slight glimmer of what could have been. It's a shame because it seems as though the correct pieces are constantly floating around, but they're just weightless suggestions instead of bold statements. With more plot details and involvement from the characters, Bastion's tale could have packed a punch.

I have to admit, I was quite divided on my verdict for some time, and it wasn't until after completing the story and putting another hour or two into the New Game+ that my opinion finally crystallized. After I'd seen the plot play out and was able to mentally put it aside, it became clear that the lion's share of the pleasure I derived from Bastion

was of the technical, hack-'em-up kind. In that regard, I salute it. On the other hand, while my hands enjoyed the time I spent with Bastion, my brain and my heart were left untouched. Rating: 6.5 out of 10.

Parents: According to the ESRB, this game contains fantasy violence, animated blood and use of tobacco and alcohol. Although the story is more oriented towards older players, I would have no issue letting children play. In fact, my 10-year-old is playing it at this very moment, and I'm quite all right with that. The level of violence is quite tame and the alcohol in the game is really a series of passive abilities equipped at a "distillery." There is no real depiction of drinking or being drunk. There is no questionable language and no sexual content.

Deaf & Hard of Hearing: You shouldn't have any problems during gameplay. The action onscreen is easy to follow, and there are no auditory cues necessary to survive the combat. However, the narrator is a large part of this game's appeal, and it's difficult to keep an eye on the action and read subtitles at the same time since the voiceovers often happen in the thick of battle. It doesn't affect play, but chunks of the script will be missed.

I think you value a story way too much. While it’s true that it can really add to a game, it shouldn’t always been a necessity. The fact that games like chess and go survived hundreds and in the case of go, thousands of years, is just a good example of this. More modern examples like Total War series, Civilization series, Sims, etc never failed because of a lack of story. Having a goal should be in most cases be enough, don’t try to turn every game in a book. As a matter of fact, I know people who didn’t… Read more »

I don’t know about you guys, but I think much of the narrative was lost on me simply because of the fact that I couldn’t pay attention to the narrator beyond descriptions of my immediate actions. When the voiceover was tied directly to what I was doing on the screen, it worked. If it went into any other narrative register, though, I’d find myself missing most of what was being said because most of my attention was going toward the combat. I think this is a fallacy with this style of narration, and the creators probably weren’t sufficiently aware of… Read more »

Finished the game this morning and i must say i thoroughly enjoyed the game in almost every respect. The gameplay is superb with very responsive controls. The wealth of options (due to weapon combos) on how to kill off enemies is amazing. Visuals and soundtrack are top notch as well. Although i loved the idea of the narrator i did find that i failed to grasp bits of information without subtitles, especially towards the end of the game. (english is not my first language so maybe that’s why). As for the difficulty i would agree Brad that you are basically… Read more »

Two things that Bastion has going for it are its visuals and the narrator. The visuals are some of the most unique you’ll find in videogames and they are a very welcome change of paste from the brown and black that dominates so many games today. No matter what you think of this game, in 20 years you’ll look back on these visuals and still be amazed. The narrator is the second point. I didn’t finish the game, but having the narrator describe what I am doing is great. Like when I was using a weapon a lot, and the… Read more »

Did you play through all the reflections as well? They add a great deal to the story by providing back story as you fight through each reflection (like a battle arena). I am asking because you didn’t mention them in your review and I’m wondering if they would have changed your opinion on the story. That said, I too didn’t really feel a connection when faced with the final choice at the end of the game. I thought the combat was the weakest point, there is nothing really satisfying about the weapons or combat. I thought the art, music and… Read more »