More Grand Theft Auto than the latest incarnation itself, Saints Row is basically an unabashed love letter to GTA: San Andreas. Is this a bad thing? Not in my view… I awarded San Andreas my first-ever 10, so if you're going to copy from someone, copy from the best.

Saints Row is set in the fictional town of Stilwater; a city split up into four areas, each controlled by a gang. After being jumped in to the Third-Street Saints (and bonus points for that little scene) the player is tasked with taking down the three rival factions: the Vice Kings, the Carnales, and the Rollerz.

Each of these groups sports its own complete storyline, and can be taken down in any order. Unlike some other open-world games, the core mission variety is superb, with each scenario offering something a little (or a lot) different. Killing enemies is a part of every level, but Saints Row will have you tagging, hijacking, bombing, sniping, parking buses on train tracks, and a hundred other things that keep the entire experience feeling fresh and surprising. The characters in these scenarios are instantly relatable (if perhaps a little stereotypical), and the game never loses sight of its plot.

For players with ADD, exploring the city at will is always an option, and there are tons of interesting and inventive sidequests throughout. Taking the concept of sandbox gameplay to heart, I was impressed with the wealth of content Saints Row brought to the table—my personal favorite was probably liberating prostitutes from rival pimps and delivering them to new employment, but the demolition derby was a nice surprise, escorting a suburban soccer mom on her dope-slinging route was clever, and the insurance fraud scenario (yes, insurance fraud) was the most absurdly funny thing I've seen in some time. 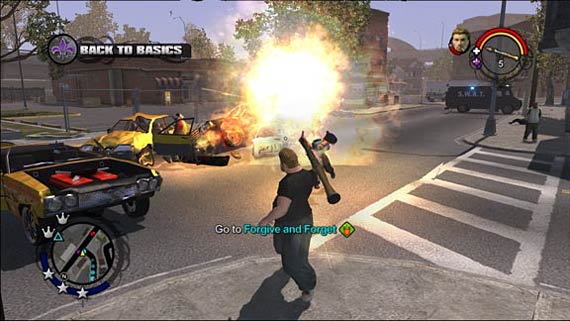 Technically, the game has got its priorities in order with tight controls that feel instantly accessible and lots of small touches like sensible ‘retry' options for failed missions and the ability to set waypoints on a map for quick navigation. The audio portion of the game is no slouch either, with solid voice acting and a top-quality soundtrack. Character customization is always welcome and Saints Row has very respectable options in this regard, though being a female (or otherwise) isn't a choice—yet. That's coming soon in Saints Row 2.

As rosy as this all is, there are a few downsides to be aware of. For starters, requiring a player to earn "respect" by doing side missions before unlocking the next step in the critical path can be an unwelcome distraction from the gangland drama, and I encountered more than a few bugs (cars disappearing, falling "under" the city, etc.) that necessitated some restarts. None of it was game-ruining… just irritating. Oh, and the game's M rating? Absolutely deserved, and then some. Not kidding on this one.

Though some may see it as a me-too effort on the coattails of GTA's success, there's no denying that Saints Row knows what it wants to do, and does it well. The T's are crossed, the I's are dotted, and everything feels just like it should. I can't think of a current sandbox game that tops the amount of content and sheer diversity of gameplay to be found in Stilwater, presenting the total crime-life package for one low, low price.

Disclaimer: This review is based on the Microsoft Xbox 360 version.

I think one other downside to be aware of is that Saints Row (at least in my estimation) shows none of the narrative or worldbuilding skill that goes into the later GTA games. Almost all of the *gameplay* is really solid, some of it better handled than the GTA equivalent, some of it completely fresh, and most stuff at least comparable. But I didn’t feel like Stilwater was an interesting or memorable location to explore, the “humor” is considerably less subtle than GTA’s (and considering that people have problems with exactly how unsubtle GTA humor can be, that’s saying something)… Read more »