Billed as a major RPG for the PlayStation 3 and positioned to be something of a system-selling blockbuster, the reality of what Folklore turned out to be makes it quite an unusual and surprising title.

In essence, it's more real-time action than RPG. There are only a few tiny areas to explore, the critical path is extremely linear, and although leveling-up does play a small role, there's none of the depth or customization inherent to most games in the role-playing genre. Calling Folklore an RPG is a gross mischaracterization, does a disservice to what the game actually brings to the table: solid action mechanics and creature-collection akin to Pokémon, only with a much darker, more mature slant.

Split into two halves, Folklore touts dual protagonists Ellen and Keats. The former is a young girl who comes to the mysterious village of Doolin to find her mother, the latter a skeptical journalist investigating Doolin's reputation as a place to speak to the dead. They both soon discover a fantastically beautiful Netherworld populated with ethereal and monstrous Faeries, and together unravel the struggles of the dwellers within.

Although the developers seem quite sincere and their Rashomon-lite approach to the plot is appreciated, I'm quite sad to report that the story never comes together. Keats' side chronicling his investigations is fairly compelling, but Ellen's amnesiac-discovering-her-own-past bits are murky and total cliché.  It's a shame because the game often feels like it almost makes sense of the supernatural setting, but the dialogue is quite stiff and there's no real dramatic tension to be had. A better set of writers could have fashioned something quite respectable out of the elements present. 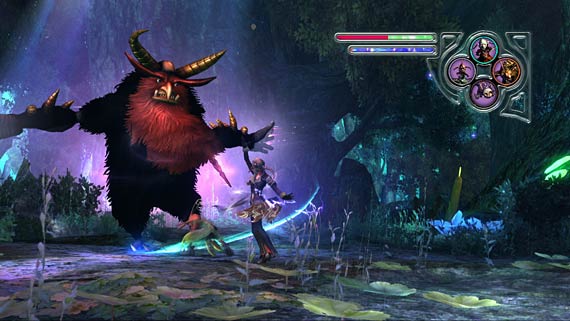 Although the story isn't much to talk about, the gameplay is. Once inside the Netherworld, both heroes have the ability to "capture" any of the Faeries they come across. Once caught, these creatures are used as special attacks with attributes that provide a paper-rock-scissors theme to the combat.

An interesting aspect of the system is that the Faeries work differently for each of the characters—a creature that delivers a sweeping punch for Keats becomes a fiery freight train for Ellen, or a potent attacker for Ellen grants an unbreachable defense for Keats, and so on. The sheer number of Faeries keeps the fighting fresh as the player constantly shuffles through their repertoire, and the addictive "gotta catch ‘em all" element is hard to ignore.

While it's true that Folklore was hardly the success Sony expected it to be in the states, it must have been much more welcome in other markets since there's a substantial amount of downloadable add-on content available (and even more in Europe and Japan that US gamers didn't get.) In fact, I'd say that the best missions are download-only. Some of the retail game's plot holes get filled in, extra backstory is given to peripheral characters, puzzles that didn't exist in the main game use the Faeries in new ways, and there are more bizarre creatures to collect.

It's unfortunate that expectations for Folklore were skewed from the get-go. Billing it as an RPG downplays the engaging mechanics and will likely leave anyone expecting a grand, large-scale adventure feeling unsatisfied—people wanting something a little different are sure to appreciate the lush visuals, intimate setting and rich character design that enhance its solidly designed core. I can't say that it deserves higher marks as a critic, but I had great affection for Folklore on a personal level.

(Special note: fans of the GameCube's obscure Lost Kingdoms should go out of their way to track down Folklore… the two titles have more than a little in common.)

You hit the nail on the head with this one. I adored this title very much, It was something my neice and I could both enjoy. It is a shame the cult following was so small here in the states. I missed out on any new DLC. Well she has Poke’mon and I can get back to my choice JRPG’S. Thanks for the honest evaluation of this title. This is why I always come here prior to making anymore purchases. Gamecritics has my respect.