The concept of switching at-will between characters or teammates in a story-driven title has been batted around for quite a while in the videogame world, but no one's been able to nail it completely. There have been many attempts, such as the sci-fi Brute Force or the quasi-supernatural Geist for example, but for one reason or another developers keep stumbling. It's frustrating, because this concept is one that fascinates me, and seems like a can't-miss in terms of gameplay. Clive Barker's Jericho is the latest attempt that I'm aware of, and although it's not everything it could be, it gets less wrong than others.

An evil supernatural force is intent on wreaking havoc on earth (what else can an evil supernatural force do? Needlepoint?) So a top-secret supernatural warfare unit is sent in by the government to keep a lid on things. Each character packs a different weapon and has access to a unique magical ability. Soon after the game begins, the team's leader is killed, but lives on as a specter able to possess each member of the squad at the player's discretion.

Playing through Jericho just proves to me (again) that the basic idea of the "switch" mechanic is a good one. Being able to have a different load-out and special power depending on the immediate situation works well, and it's always a good thing to be able to jump back and forth across a battlefield to get the drop on the opposition. Luring enemies towards the heavy gunner out in the open left their backs completely exposed to the ninja behind them, and with just a few button presses, I was orchestrating both roles. 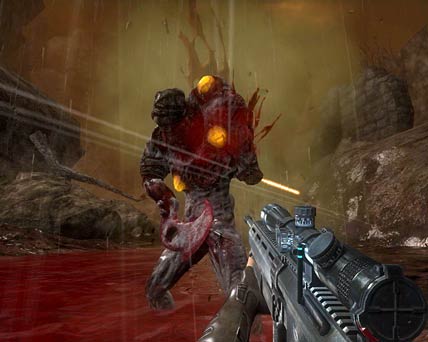 Unfortunately, as much as I enjoyed Jericho for its attempt at "the formula that won't crystallize" I can't wholeheartedly recommend it.

For example, despite having master horror author Clive Barker involved, the story elements felt limp, and the voice acting was horribly miscast in some instances. The level designs are fairly boring thanks to their studies at the school of linear run-and-gun, not to mention the drab colors and uninspired architecture. Enemy types are very limited (way too many exploding baddies), and although the visual design of the characters is strong, some of the powers were too weak or useful only in very specific circumstances. The entire experience felt perched on the verge of being a great adventure, but it never crossed the crucial make-or-break line.

Despite being weak in key areas, Clive Barker's Jericho isn't a terrible title by any means, and other fans of the team-switch concept (like me) will find it to be a worthwhile weekender. However, this title seems to have quite a bit of potential for a superior sequel and I'd love to see where the franchise could go if given another chance. Hopefully the developers (and Clive) will get one.

Disclaimer: This review is based on the Microsoft Xbox 360 version.

Random people being annoying courtesy of the anonymity of the internet… that i understand. the thing i *don’t* get is how Yahtzee was brought into this.

if you’re just some random Yahtzee fanboy going around telling people they’re lesser than he is for no particular reason, that’s pretty retarded.

…and if you are Yahtzee, well, i expected something wittier, mate.

it’s a Fail either way.

I don’t get it. Disagreeing with a reviewer makes the reviewer a bad one? Do you have a stronger case than this “because I say so” attitude? And is calling people a prick the most you’ve learned in college?

And this is coming from the guy who say that Lost PLanet has “good storyline” and said Psychonauts has a weak storyline. Go to college. Yahtzee is still a better game reviewer than you are prick.

I’ve watched 90% of Ben Yahtzee’s review (including Jericho) and read 70% of Brad’s review, and I disagree with this anonymous guy. I’m not saying this for the sake of being a sycophant, but Brad gives fairer assessments than Ben, who seem to do what he does more for the sake of validating himself as a guy with too much stock dick jokes than for the sake of informing others the quality of a product – for example, have you seen his review of Soul Calibur IV?

And though I’ve found Ben’s reviews entertaining, I’m beginning to tire of him.

I actually purchased this game when it was first released and I have to say it was a decent title but the story did have gaps as well the gameplay felt somewhat stiff in areas. In my own opinion I’d have to say it is worth the bargain price nothing more nothing less. But a sequal with some minor adjustments would be killer.

Hey, thanks for that witty, insightful and perspective-altering comment. I appreciate the time (what, like four seconds?) it must have taken for you to come up with that.