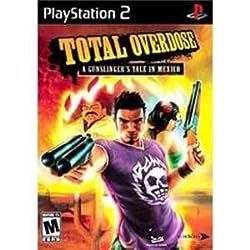 After playing Chili Con Carnage on the PSP and finding it to be an absurd, flawed game that managed to make me chuckle and kept me coming back for more, I decided to check out Total Overdose and see what Deadline Games had turned out the first time. It turns out that the two games are almost carbon copies of each other, one for a console and the other for a portable… not that this is necessarily a bad thing.

Although both games feature the same main character, an almost identical supporting cast, numerous similarities in level design, and a host of other things that make it pretty clear Carnage was carved from Overdose's template, there are enough differences between them to make them both worth playing for people (like me) who enjoyed time with one or the other—ust be prepared for frequent occurrences of déjà vu.

Entirely comprised of the sort of leap-in-slow-motion "bullet time" action that's been a common staple since John Woo and Max Payne made it popular, the game's hero can throw himself in any direction and perform impossible headshots in the air with ease. Most levels are straightforward shoot-outs as the story of the DEA infiltrating a drug'n'weapons cartel unfolds, but the biggest area where Overdose diverges form Carnage is that it has a wide-open GTA-style overworld to get lost in. 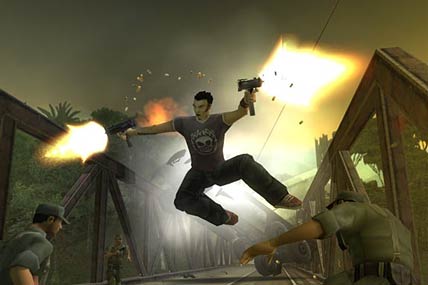 Players are encouraged to engage in random chaos while searching for various power-up icons, but this aspect of the game feels empty and unfulfilling—ultimately a waste of time and resources. The developers must have agreed since they axed exploration for Carnage. Thankfully, Deadline included an option that can warp players directly to their next mission and skip all of the travel time. This feature was not only a godsend, it was genius. To any developers who try to create similar types of GTA games in the future: COPY IT.

Though the frenetic death-dealing can start to feel repetitive during long play sessions, the game's over-the-top sense of humor and superb comic timing keep things moving along as bullets fly and shady henchmen fall. I'm a great fan of the hero and his supporting cast, and getting into something so completely impossible to take seriously was wholly appreciated. The writers have a two-for-two record when it comes to hitting the comedy sweet spot, and I hope they'll keep it up.

It may not bring a lot of new ideas to the table, but there's something to be said for a few hours of ridiculously outrageous action with tongue planted firmly in cheek. Run and gun, enjoy the cut-scenes, and realize that rescuing this disc from the used bin will probably result in one of the best enjoyment-to-dollar ratios out there today—as long as you use the skip feature to stay on course, that is. Rating: 7.5 out of 10.

Disclaimer: This review is based on the Microsoft Xbox version of the game.

This game is cheesy and dumb, but very playable and funny; a real guilty pleasure.