When I go through a pile of used games, I usually have a pretty good idea of what I'm looking for. I keep tabs on titles that look like solid "maybes"—games that may have a few good points, but are sketchy enough to discourage me from risking $50 buying them new. It's pretty rare that I'll end up bringing something home that I hadn't already targeted as such, but Surreal Software's The Suffering was exactly one such game.

My first encounter with The Suffering was at E3 before its release. The publisher had hired a tall, toolish look-a-like of the game's star, Torque, to hang around a kiosk and tell people what kind of weapons he used while posing for pictures. Checking out what the PR had to say about the product, the only high points seemed to be that the main character could be covered from head to toe in blood, and that he had a variety of guns. Needless to say, I was not impressed, and combined with the rough-looking build on display, I had crossed it off my investigation queue then and there.

It's unfortunate that I was so turned off by its poor showing. If the marketers had played to its strengths, it might not have taken me four years and a beat-up $4 dollar copy to try out this interesting, bold entry into the horror genre.

I would never have guessed, but The Suffering has a lot more going for it than cheap gore and guns. Although the core gameplay (third-person run-and-gun) isn't anything players haven't already seen, Surreal did a bang-up job on the title's intellectual side and turned what could have been a standard action game into something that's a lot more like Silent Hill with a higher adrenaline factor. 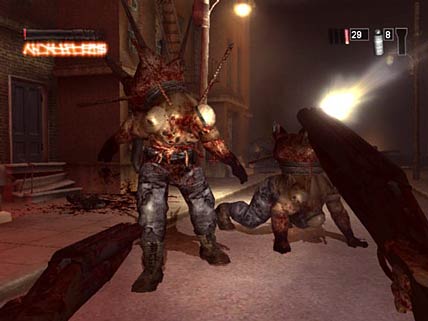 In a nutshell, the player's character is a convict who's been sentenced to death for murdering his wife and two sons. Through choices made during gameplay such as helping people escape or choosing to murder them instead, Torque's true history can be rewritten. Although I disagreed with the choice to make Torque a silent protagonist (a trick which never works), this did-he-or-didn't-he element was fairly compelling on its own, but even more so when viewed in combination with the elements of the prison itself.

Incarcerated on an island that's best described as a magnet for evil deeds (quite similar to the town of Silent Hill mentioned above), Torque's adventure takes him from behind bars to locales where nefarious acts had been committed at different points in history. A WWII-era bunker is filled with the hopeless ghosts of suicide, a pre-Depression asylum across from the prison spawns images of horrific medical experimentation, and a wrecked slave ship from even farther back in history all help paint the entire island as a place that could very likely be the mouth of Hell itself.

I admired the various flashbacks, hallucinations and dream sequences that set the tone of madness, and the open style of interacting with the few inhabitants left behind by the creatures was surprisingly engaging. The Suffering also ends in a perfect way, with an ultimate resolution specific enough to satisfy, while retaining just the right amount of unspoken secrets to make me puzzle over what it was that just happened, and exactly who (or what) the titular "suffering" referred to…

Although there are minor rough edges like some short segments of unclear level design and a handful of places where the scripted elements didn't quite come together, The Suffering took me by surprise by being an ambitious game that succeeds where a lot of others have failed. I put it on my shelf proudly beside other classics in the horror genre, and recommend it to anyone who doesn't mind a well-justified M-rating. Rating: 8 out of 10

Disclaimer: This review was based on the Microsoft Xbox version.

I played this on the original Xbox when it came out and to this day I still think it’s the best horror game I’ve ever played and puts the Resident Evil games to shame with an unbelievably tense atmosphere and some of the most chilling sound effects and scenes you’ll ever exoerience in a game, I loved playing this game!

The Suffering is on my short-list of genuinely creepy videogames. Like most of them, I’ve never made it very far in it (I just get too creeped out to keep playing). But I’d still say, for that price, it’s a hell of a bargain.