Being scared and shooting things are all well and good, but sometimes what's needed is something lighter; something pure and efficient without any designs of being more than it is. Ending the Basement this month is The Adventures of Darwin—a colorful, uncluttered title with the power to cleanse this jaded critic's palate and remind him that sometimes a game is just a game, and that's OK.

The disc starts as a furry monkey dreams of impending asteroid-induced cataclysm. Sharing his premonition with the tribe, he's elected leader and goes on a mission to do whatever he can to help his species avoid extinction. As the title suggests, evolution is one of the game's main concepts. Although there's nothing biologically accurate about the way it's presented through the gameplay, it's all in good fun.

For the old-schoolers out there reading this, The Adventures of Darwin is best described as a mix of the SNES cult classic E.V.O. and the PlayStation's Tail of the Sun, with some Pikmin thrown in for a group mechanic. Starting off with the player-controlled leader monkey and five followers, most of the action involves venturing into one of five separate areas to forage for food and materials used to improve monkey village. 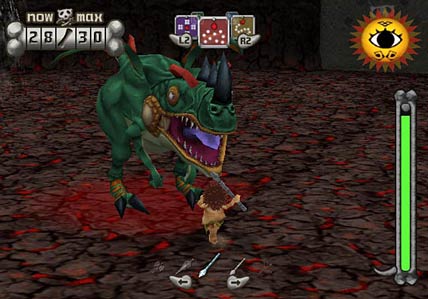 By bringing back iron and wood, clever primates in the huts back home soon come up with axes and spears. Bringing back meat and fruits increases the population, and random things like strangely-colored grasses or variegated mushrooms will lead to discoveries like potions that cure paralysis, or traps that can be used on some of the large creatures in the field. As the game progresses, more followers are added to the away team, and these hairy fellows become a force to be reckoned with when traveling in greater numbers.

During investigations, it's revealed that each stage houses at least one important discovery that will bump the monkeys up a notch on the evolutionary ladder. For example, the first stone axe causes the characters to lose their prehensile tails and stand a little straighter, while the final discovery of fire will lift Cro-Magnon characters into fully-developed Homo Sapiens. It's not birds on the Galapagos islands, but then again, the game never attempts to be very deep or serious in any respect—and I mean that in the best possible sense.

There's not much more to the game beyond what I've already described, but that's one of its charms. After sitting through radically complex fare and being overwhelmed with the latest bells and whistles, it was completely refreshing to sit down with something that puts all of its cards on the table from the get-go, sports stripped-down yet appealing visuals, and invites you in with something as elegantly straightforward as hunting and gathering.

Although The Adventures of Darwin can most likely be completed and put away in a day by a steadfast player, the beauty of the game isn't that it offers endless hours of replay, downloadable user-created content or seamless online deathmatching (because it has none of these things) but that its vision, production, and identity are all perfectly in tune with a core concept that's not afraid to explore the idea that complex is not necessarily better than simple. Rating: 7 out of 10.