Readers who've been with us for the long haul may remember the original WinBack on the Nintendo 64 getting a lot of love from this site. It was a favorite of the Critics at that time, and we even ran an interview with one of the developers. Doing "stop and pop" in 1999 long before Gears of War was even a gleam in Cliff Bleszinski's eye, it was a game attempting to take action to the next level before the technology was ready to handle it.

Although the WinBack formula has long since been left in the dust, I feel comfortable in saying that if Project Poseidon had hit shelves within a reasonable amount of time after the original, it would have stood a good chance of becoming a leader in the action genre. In fact, it reminds me a great deal of Toby Gard's Galleon—due to their extremely late arrivals, both excellent projects were rendered evolutionary dead ends.

Hearkening back to an earlier age before third-person shooting became comfortably mapped to dual analog sticks, Project Poseidon features a team of three tactical officers as they take on hallways filled with lasers, boxes, and bad guys. The movement and gunplay is definitely on the clunky side, but it has an unorthodox team-based approach and an extremely fast, arcade-like feel to make up for it. 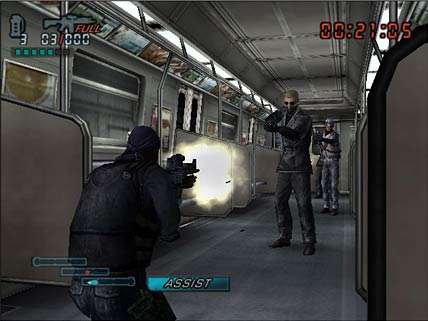 Going through any area with one team member leads down a specific, linear path. After reaching the end, a second member of the team goes through the same location on a different route, giving players two separate viewpoints of the same mission. When the first character needs a door unlocked, the player actually does the unlocking as the second character a little bit later on. When one is pinned down and rescued by their teammate, the roles flip and the player does the rescuing soon after. Although not explored to its full potential, the concept has merit.

However, the element that really makes the game stand out to me is the speedy, performance-based play. Each level is on a timer counting down, and a lifebar is shared between characters. Do poorly in the first leg, and the next teammate starts with a handicap. Add in that Project Poseidon's shooting feels like nothing so much as Time Crisis taken off its rails, and everything comes together in a way that removes it from direct competition with other, more conventional games. It's all about shooting enemies as quickly and efficiently as possible and makes no attempt to disguise itself as a standard adventure outing—I have to say I admire the game for its honesty.

As one more addition to the very small niche of "score-based non-rail shooting galleries with a little bit of story thrown in," WinBack 2: Project Poseidon has a lot in common with the highly-influential-yet-never-credited Kill.Switch, which in turn owed a creative debt to the original WinBack. Although it comes perilously close to overstaying its welcome by clocking in at around ten hours (and whoever added mines with laser tripwires to this game should be booted out of developing permanently), anyone who enjoyed the titles I mentioned will likely enjoy Poseidon—this style of game can be addicting to the kind of player that gets a high off of adrenaline and fast reflexes. It's not for everyone, but WinBack 2: Project Poseidon sets a very clear goal for itself, and accomplishes it nicely. Rating: 6.5 out of 10