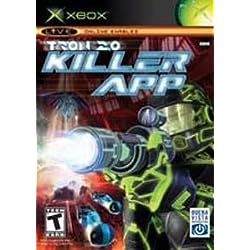 Starting off this installment of the Basement is Tron 2.0: Killer App. More first-person adventure than shooter, 2.0 is positioned as the direct sequel to 1982's highly influential yet strangely unsuccessful film, Tron. It's an interesting approach that's wonderfully satisfying for people familiar with the source material, but the game itself is so strong that previous experience isn't necessary to appreciate what Climax has created.

A must-play effort that manages to be intensely surreal while being instantly, strangely familiar at the same time, Tron 2.0 is set inside a series of computers, networks, and the Internet itself after main character Jet Bradley is transformed into a series of 1's and 0's by a sapient math analysis program in need.

As one of the most visually striking movies in history, Tron's neon geometry and electric hues not only translate perfectly to the Xbox, but are complemented by cleverly sophisticated level design that goes hand-in-hand with both style and substance.

The conceptual work that went into imagining the game's world is nothing less than a masterpiece. Of course, the groundwork was laid by the film's brilliant creators over 20 years ago, but 2.0's developers have done a flawless job of updating and expanding every aspect of the original while remaining completely true to its spirit and themes. 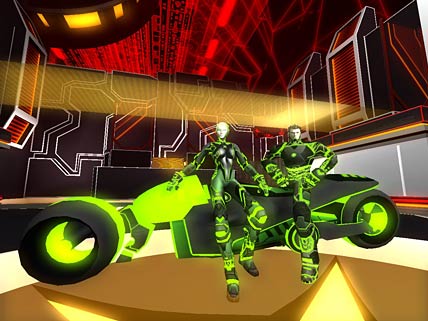 The view from inside modern technology is represented by incredibly intricate architecture, while outdated systems feature a stark, simplistic appearance. The Internet takes the form of a vast, bustling metropolis while a handheld PDA equates to being a claustrophobic, four-room affair.

As for Jet himself, his weapons and abilities are couched as files and subroutines that must be downloaded and upgraded throughout the game while battling enemies that are aggressive programs and destructive viruses personified. The logical extrapolations drawn between the elements of Tron 2.0 and real technology are captured perfectly—fantasy, to be sure, but a fantasy that makes complete sense within its context.

Jet's journey through communication pathways and hard drives smartly balances action with exploration of the ubiquitous, miraculous creations that have become such an integral part of modern life to provide an engaging experience in a fascinatingly unique setting. Although the Xbox version isn't as optimized as it could be (the load times can be chunky, and make sure to save your game every few minutes since there are no automatic checkpoints) Tron 2.0 is one of the most perfectly designed projects I've seen in a long time, absolutely succeeding in both style and substance. Rating: 8.5 out of 10

Very glad to see this gem of a game get the love it deserves. I thought Tron 2.0 was one of the best games released in 2004 (or was it 2003?) and hated to see it get so ignored by the mainstream. Everyone who bemoans the generic FPS and WWII games that get shoveled onto store shelves owes it to themselves to track down a copy of this and play it. The PC version is also very, very goo.