I'm a Hulk fan from way back. Something about Bruce Banner's struggle with an explosive id has always captivated me, even when I was too young to understand the metaphor. Maybe it was the dichotomy of a dwindling intellect and unlimited physical strength, or maybe it was just those cool ripped-up purple pants. Whatever it was, ol' greenskin has always been a favorite. In fact, Mike Mignola's run on the big behemoth's series in particular was some of my favorite comics work of all time.

In any event, although there have been a number of games that have attempted to capture the Hulk in an electronic format, none of them have really nailed the pure destructive essence and dual nature of the Hulk's condition until this one. It's funny, even though this particular version was created as a tag-along to the much-maligned Ang Lee film, I think the end result was even better than the more recent, free-roaming Hulk: Ultimate Destruction.

Although the scope of Hulk is very small and the project as a whole feels quite limited, I do give respect to Radical for doing a great job in crafting something that hits the right notes and stays in tune with the source.

The first thing I noticed were the graphics. Simple and clean for the most part, the individual characters are stylized in a way highly reminiscent of Killer 7. (I'd actually like to know the exact term describing this method. If any readers can clue me in, please send me an e-mail.) 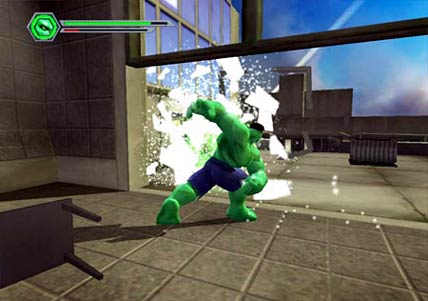 As pleasing as the visuals was the fact that the environments are quite destructible. Just about anything the Hulk sees, the Hulk can smash. And throw. And use as a club. Considering its age, this aspect of the gameplay actually caught me off guard. There's nothing better than delivering a crushing blow to a tank, and then using that tank's turret to destroy the tank right next to it.

However, even though it's great fun to smash and wreck things, the aspect of Hulk that really sold me was the stealth-based Bruce Banner segments. I recall reading that most reviewers hated these short levels because they interrupted the flow of carnage, but to a fan like me, this is a crucial part of the character. Every bit as important as the muscles and gamma radiation-fueled rage is the anguish and inner torment that haunts Dr. Banner between rampages. Although I do admit it wasn't always enjoyable to be weak and defenseless, skulking in the shadows, the sense of powerlessness is necessary and fitting.

With all that said (and the disclaimer about being a Hulk fan at the beginning) I do want to qualify my comments by saying that I think full appreciation for this particular game will be had by paying no more than $5 or $7 and then turning on some of the codes. Game developers always struggle with bringing super-powerful comic characters to life (Superman is another prime example) because it's hard to structure challenging play when the main character should theoretically be able to destroy all opposition with little effort. It didn't make a lot of sense to me to have the Hulk bothered by crowds of soldiers with machine guns, so activate a few of the cheats and get a more accurate "Hulk smash puny humans" experience. Rating: 6.5 out of 10