With current releases still in a bit of a lull, my 2013 backlog-athon continues…

I mentioned in the last post that I was playing Dead Space 2, but I called it quits and bumped it to my "trade-in for credit" pile.

It's definitely a pretty game. There's no doubt that a lot of time and effort were put into the production values, but my general feeling was that the developers were tasked with creating a sequel to the first game and didn't really have any idea what to do next.

I got about halfway through the game, more or less, and the entire time I was doing little more than walking through beautifully-rendered hallways while shooting ugly, undead creatures. There wasn't a lot of story happening, not a lot of characterization, and precious little variety in gameplay. The zero-G environments were a nice touch, but they were just momentary novelties that served to break up the corridor blasting.

Apart from the monotony of the gameplay, I was quite surprised to see that the weapons system seemed so totally ill-conceived.

While the main character can purchase a wide variety of weapons, the "nodes" which power them up are in short supply. This means that the game was encouraging me to stick with the same weapon or two (since these are the ones which I spent all my nodes on) and discouraging experimentation with other, underpowered weapons. The system would have worked better if the nodes could have been removed and re-used, but that was not the case.

White Knight Chronicles. I'm pretty much done with Japanese role-playing games (JRPGs) unless they are of the "incredibly fabulous" variety, of which this one is not. Next!

Batman: Arkham City. While I was a huge fan of the previous game, Arkham Asylum, Arkham City rubbed me the wrong way from the start, and did nothing to endear itself to me as time went on.

When the game begins, the developers don't seem to understand what constitutes a clear, instructional tutorial. It's as if they assume I instinctively remember how to play the game after completing the last one, and rush through the familiarization process entirely too quickly.

Complicating things is the fact that Batman seems to have too many gadgets and too many moves from the start. Rather than starting small and slowly becoming acclimated, there were too many things to deal with at once, and I found it difficult to get comfortable with the controls. Even after playing for a couple of hours, at no point did the game feel natural or instinctual…

In terms of the story, I guess I'm not enough of a Batman fan to be drawn in by what was presented.

Cordoning off a huge section of Gotham city and turning it into a prison is pretty absurd to start with, the Catwoman sections which were reported to be so important and integral by the developers came off as nothing more than non-essential distractions, and I didn't find myself motivated by anything that was happening… and neither did Batman. I get that he is a supreme bad-ass that stays cool under pressure, but after getting poisoned by the Joker, there wasn't any drama or any increased stakes. In fact, I forgot that he'd even been poisoned for a while.

Open-world games are fine, but they aren't a huge draw for me in and of themselves, and I'm only a casual Batman fan to begin with. Simply combining these two elements doesn't feel like enough… Arkham Asylum drew me in immediately, but Arkham City felt like an unfocused, meandering mess that just left me cold. 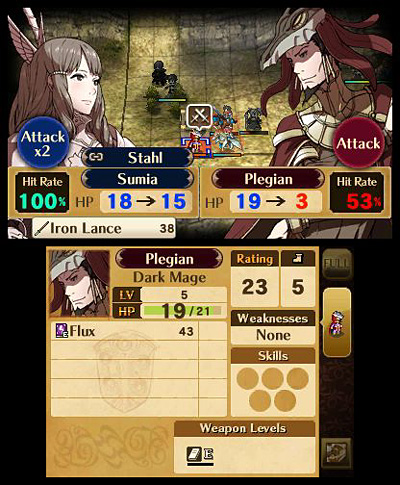 It's not a backlog title, but I managed to get a copy of Fire Emblem: Awakening for Nintendo 3DS, and I've been putting some time into it… it's not title I was eagerly anticipating, but I needed a portable title and word of mouth from people that I trust was almost universally positive.

I've played almost all of the previous games in the series, and while I generally liked them, I never managed to complete a single one. Maybe it's just me, but I felt that there were always massive difficulty spikes at the end of each title that bordered on cheating. Because of this, I wasn't too eager to get into Awakening, but it's been quite pleasant so far.

Despite containing the usual (and utterly tedious) "countries at war/political maneuvering" bullshit that strategy role-playing games (SRPGs) can't seem to stay away from, the story has managed to keep in touch with its characters and hasn't become head-scratchingly convoluted yet. That's a huge plus in my book.

Also, I'm becoming quite a fan of the system which builds friendship between characters… when two people feel connected, they give each other massive bonuses and can often chain attacks against enemies. Plus, it looks pretty damned cool.

Much has been made of the series' reputation for its characters encountering perma-death if they die on the battlefield, but Awakening is the first to buck the trend by including includes a "casual" mode. When selected, characters are simply knocked that of action and are ready to get back into the thick of things after the battle is over. Some may cry foul, but the original perma-death is still an option, and I've always been the kind of player who would simply re-load a save if one of my favorite characters died.

I'm long past any need to "prove myself" by beating "hard" games just for the sake of doing so, and in that respect, this new mode is a godsend. The game is still quite enjoyable without the über-high punishment, and it saves me all of the hassle and stress associated with permanently losing characters.

Side note: Apparently the game is becoming quite hard to find… I've heard several of my friends on Twitter report that they've been unable to locate any copies despite thorough searching, so if you are the sort of gamer (like I am) that prefers to have a hard copy, you better get cracking.

Just FYI, the game is available on the 3DS eShop for those who swing that way. I think it's pretty crappy that the game is exactly the same price to download as it is to buy a retail copy, not to mention that Nintendo doesn't exactly have a great reputation for being flexible or fair when it comes to their download policies, but if that's the only option you have to play, then… it's an option.

I’m long past any need to “prove myself” by beating “hard” games just for the sake of doing so, and in that respect, this new mode is a godsend. The game is still quite enjoyable without the über-high punishment, and it saves me all of the hassle and stress associated with permanently losing characters. It’s not an issue of “proving myself”. Easy strategy games are boring. Choices, challenges, and high stakes make a strategy game compelling. I’ve only just started FE:A, on Hard/Classic. I’m mostly unfamiliar with the series. But I could see myself becoming bored with it if there… Read more »

Couldn’t agree more on Dead Space 2. Concerning Batman Arkham City, you also make valid points concerning the story, but I disagree regarding the move set. Arguably I didn’t have any problems remembering the controls, and Batman may have too many moves (many went mostly unused during my playthrough), but I’m happy they didn’t lock some of them off from the start. In Arkham Asylum, I thought the fact that Batman “forgot” some of his gadgets in his batcave was very contrived, and I resented very much the backtracking that was necessary afterwards (I can’t help but be irritated by… Read more »