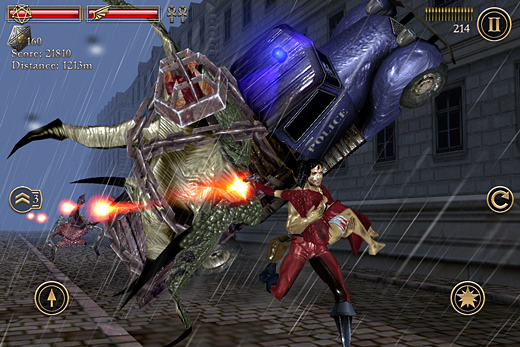 I'd like to give a quick shout-out to an iOS title I just discovered the other day, Blood Roofs. While I was a little hesitant to download something with such a stupid title (and it wasn't at all clear about what sort of game it actually was) the screenshots looked great and I was intrigued.

Once things got going, it turns out that Blood Roofs is an auto-run game similar to Temple Run or One Epic Knight. (Or Canabalt, if you go that way, although I've never found it to be as entertaining as most people tell me it is…)

The game begins with the main character swinging down and scooping up an injured damsel in distress into his arms. He's not saving the day entirely by himself, though. Since his hands are full, she has to be in charge of taking down enemies with her machine gun. This teamwork mechanic is interesting to me, and what's even more interesting is the creative interpretation of the genre that the developers took—the main character is apparently a quasi-vampire because his jumping ability is well into the "superhuman" category. The player can also unlock a pair of bat wings which function as double-, triple- and quadruple-jumps.

The two characters take off across the rooftops of a fog-choked city, leaping from place to place while dodging horrors straight out of a Lovecraft novel. The level design still pushes the player forward at a rapid pace, but there are often multiple routes and the game is more about landing massive jumps than it is about split-second reflexes. Toss in some strategic power-ups and some nifty boss encounters, and Blood Roofs turned out to be one of the most interesting and exciting auto-run games I've seen in quite a while.

I've been talking about this a lot on Twitter lately, but I'm going to make a strong effort to whittle down my backlog this year—I know for a fact that half of the stuff in my stack is probably not good enough to spend a lot of time with, so I'm going to pick out some titles over the course of 2013 and start getting rid of stuff that I'm realistically never going to finish.

My concept is that I will pick something and devote at least one solid hour to it. If by the end of that hour I'm not interested enough to see more, then it goes in my "bye bye" stack and I'll trade it in for credit towards something else. If it does seem interesting, then I will stick with it and finish. Not a very complex process, but finding the time for backlog games in between my review games is a bit of challenge.

The first game I picked out of the stack was the Journey Collector's Edition. This one was a cheat since I've already finished all three of the main games on the disc. I primarily got it because it was dirt cheap and because I was curious about the three mini-games included. I checked them out, two were fairly interesting (one didn't seem very special at all) and I moved on. One backlog game down! 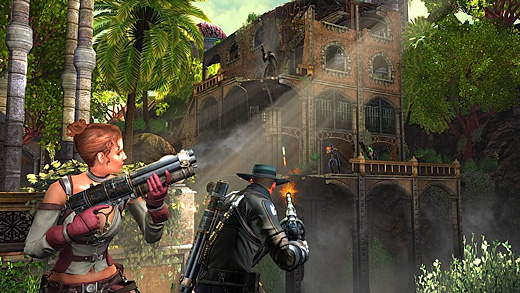 The next game I selected was Damnation on PS3. Without fail, every single person I've ever asked about this game said it was utter trash, but the box was so intriguing and the subject matter (Steampunk/Wild West/Civil War/Robots/Magic) was just too much up my alley to ignore. I think I got it for something like $4, and at the time that I picked it up, the clerk literally told me that I shouldn't buy it.

I told him it was for research purposes.

Anyway, I started it a couple of days ago, and what do you know… it's actually pretty good. The controls are a touch wonky, the shooting isn’t very precise and the graphics are certainly rough, but it greatly reminds me a lot of PS2-era Tomb Raider, or something like Galleon or Project Eden from the same general time period. There's a certain sensibility about it that we rarely see these days… the developers designed areas that were somewhat free to explore, objectives can be met in a number of ways, and there's very little handholding. A lot is left up to the player, generally, and I can see why it left so many reviewers (apparently) confused about how to approach it.

The core of the game is environmental exploration with strong vertical elements—a lot of climbing, discovering routes up to high places, ziplining between enemy encampments, and so on. After skimming the reviews, it seems like most of the reviewers were expecting a Gears-style shooter and weren’t able to mentally process that the game was actually something else.

I’m currently trying to cook up some sort of article to go along with my experience with the game in contrast to how it was received in the reviews… unfortunately, its development house (Blue Omega) went out of business thanks to poor sales of Damnation, so tracking down people who worked on it has been a little more challenging than usual. Even so, I'm not giving up.

I liked it to a point. My main gripe was levels where to long and not complex and lack of more weapon types. Other than that it was not that bad, bland yes but bad? They give COD piece a high score yet its ten times worse….