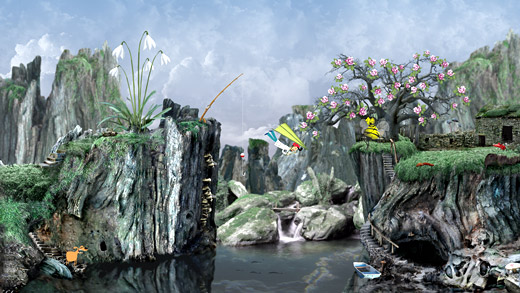 HIGH The surreal, abstract nature of the adventure.

WTF Pretty much everything you see on-screen.

As a reviewer who spends a significant amount of time checking out smaller offerings from the various online console services, coming across a title like Axel & Pixel makes the many hours spent downloading, wincing at, and deleting other, lesser titles well worth it. A wonderful change of pace from the usual twin-stick shooters, one-off Tetris clones and repetitive action titles usually found on the download, Axel & Pixel captured my attention immediately. It has precious little competition in terms of gameplay with its atavistic point-and-click style. Visually, it looks unlike almost anything else to be found in Xbox Live Arcade. Giving me pause on several levels, it was hard not to get sucked in.

Developed by Silver Wish, a small team from the Czech Republic, Axel & Pixel is a point-and-click art-house game broken up into a discrete series of twenty-four levels. Across season-themed stages, the player takes control of a painter and his dog. The pair have fallen asleep, and find themselves lost in an abstract dreamworld. Their ultimate goal is to retrieve a key that will let them both rouse, but there's a lot of puzzle-solving between them and the waking world.

In keeping with this vaguely Alice in Wonderland theme, Silver Wish has crafted each area the player explores to resemble a crazy collage cobbled together from colorful scraps of magazines and picture books, and stuffed them with bits and pieces to interact with. Click on a caterpillar, and it becomes a butterfly. Click a tyrannosaurus skull, and it reveals a hidden item. The incongruous puzzle elements from the painter's subconscious mind enhance the off-kilter art-project style and reinforce the title's surreal, entrancing vision.

The painter and his dog are equally endearing. With no dialogue in the game, emotion is conveyed through grunts and murmurs as they amble their way through each obstacle. Watching them unravel Rube Goldberg-ian solutions to problems was utterly charming, and I was often surprised at the actions they'd take. Seeing the dog whisked away by a giant dragonfly, or seeing the painter craft a hang-glider from the stem of a giant plant were like getting constant surprise gifts of amusement.

In addition to the admirable quality of the aesthetics and characters, I appreciated the amiable accessibility of the game's low difficulty. It's basically impossible to perform actions in the wrong order or get stuck in such a way that progress is halted for long. If nothing else, all the player needs to do is comb the screen with the cursor in search of a hotspot—in almost every case, just clicking what's available will naturally lead to each level's conclusion. It's so smooth, in fact, that my only complaint with Axel & Pixel was its habit of putting collectible items in checkpoint-free action sequences that seemed designed to stymie completionists. Such a decision was a little annoying while going for some of the Achievements, but a relatively small sin when taken in context.

Although some may be put off by the ease with which the game can be completed, I didn't see that as a negative at all. Games of this sort tend to lean towards being esoteric and frustrating as a means of delivering challenge, and in this genre, I'd much rather play something that invites me in and makes me smile rather than  something that has me running to the Internet for an FAQ. Leisurely, pleasantly abstract, and likeable in the extreme, I hope we see Axel & Pixel again. Rating: 8.0 out of 10.

Disclosures: This game was obtained via paid download and reviewed on the Xbox 360. Approximately 3.5 hours of play were devoted to the single-player mode, and the game was completed. There are no multiplayer modes.

Parents: According to the ESRB, this game contains comic mischief and crude humor. Nothing to be concerned about here, except maybe that a few of the creatures are a little creepy-looking. Really young kids might want to cover their eyes. Otherwise, all clear.

Deaf & Hard of Hearing: You won't have any issues. There is no dialogue anywhere in the game, and the one puzzle that seems to rely on audio cues actually has a wealth of visual information to help solve it. It's actually quite easy to pass that particular puzzle without any sound at all. The gameplay is totally accessible, so purchase without fear.

I am currently playing it myself. What is it with the Czechs and their weird but gorgeous art styles in games? Axel & Pixel reminds me a lot of Samorost which was developed by Amanita (Machinarium developer) which is also a Czech developer. Again the fact that there is no actual dialogue but only grunts is very reminiscent of Amanita games. It’s adorable and easy like you say but i have a complaint regarding this pixel hunting. It’s too much because most puzzles i have encountered so far are solved not by logic but by clicking on stuff and seeing… Read more »