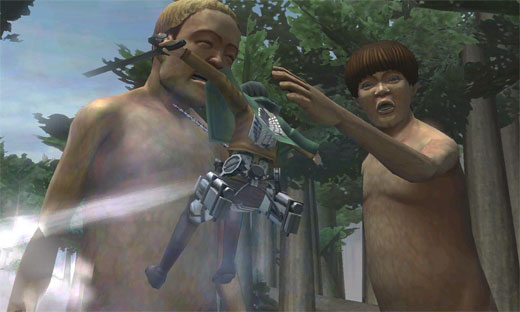 HIGH Flying around on the grappling hooks is great.

WTF The guns seem to serve absolutely no purpose.

Before playing Attack On Titan: Humanity In Chains, the only thing I knew was that it was based on a super-popular anime. Beyond that, I was assuming there would be at least one titan, and that there would probably be some attacks. After having played the game I can confirm that most of those things were correct, and also that this particular title is a shamefully weak attempt at cashing in on a license.

Attack On Titan: Humanity In Chains is a third-person realtime action game broken up into two parts, Story mode and World mode.

Story mode follows the plot of the TV series, and the player takes on the role of several main characters from the show, such as Eren, Mikasa, and others. For those (like me) not familiar with Titan, the plot is that humanity is at the brink of extinction, and the people remaining are hidden behind a walled city. Giant humanoid monsters from outside are trying to break through, and the humans fight back with sharp swords and super-cool grappling hooks that let them zip around the levels, nearly airborne.

Story mode offers a bunch of brief cut-scenes between missions which I assume are taken directly from the show. While most of them are action-packed, they don't form a compelling narrative on their own. It's possible that people who are already fans might get more out of them than I did, but it's a condensed retelling, and not a brand-new storyline. I find this approach to narrative quite lazy, and would rather see something new added to a franchise instead of getting straightforward recaps.

In terms of gameplay, the missions are split up into clusters devoted to each character. There's no difference in how these characters control, and too many of the missions and cut-scenes are straight-up repeats of each other. Rather than showing different viewpoints or enhancing the overall story, offering multiple playable characters is a cheap, lazy way to make the game seem like it contains more than it does.

Sadly what content there is can't really be called quality stuff, and things are rough from the start—production values are quite low, with crude character models and dead-simple environments. Worse, the controls are painfully awkward.

When using the standard 3DS, camera "control" is done by clicking the left bumper so that it quick-snaps directly behind the character—something that's totally not optimal for scanning the environment for threats. However, I did have a Circle Pad Pro peripheral on hand, and this fixed the camera problem. However, the game did not recognize the Circle Pad's shoulder buttons, so I had to contort my fingers into using the buttons on the 3DS itself. Neither of these setups made any kind of sense, and I'm surprised that steps weren't taken to include more options.

Despite the low-rent graphics and problematic controls, things pick up when tackling the titans themselves. In combat it's possible to lock onto various portions of their body, and when locked, zooming towards them via the grappling hooks is a real thrill. A successful hit sets the player up for a combo immediately, and with good timing, the strikes chain together quickly. There's a good rhythm to this action, and it's easily the best part of the game. It's also pretty much the only thing the game has to offer. Apart from hitting titans, there's not much to do, and there's not enough variation or depth to the action to keep it interesting for long.

The other big chunk of Attack On Titan is the World mode, which initially seems more interesting than Story mode. In World, players can create their own character and then pick from various missions and difficulty levels to play alone, with AI partners, or with friends via Internet or local wireless. It's clear that the devs are shooting for a Monster Hunter-like experience, but it suffers from the same problem that Story mode has—there's just not a lot of meat on these bones. Zipping around and hitting titans is good for five or ten minutes of play, but once the appeal wears off, there's little else to it.

To be factual, World mode does let players change their loadout, equip guns, and level up certain stats, but I didn't understand what any of these trappings were for. As far as I can tell, the only way to defeat a titan is by stabbing it in the back of the neck. As such, throwing grenades or having large guns that require a player to be a non-moving target on the ground don't make any sense. The devs are apparently copying systems that they see in other "hunter" games, but none of this peripheral stuff serves any purpose. And expecting players to dig deeper and grind for "better" weapons? That's a real joke.

Although I came to Attack On Titan: Humanity In Chains as someone who knew nothing about the franchise, I will say that the source material seems quite cool, and I'm always down for anything that involves grappling hooks. That said, this game is the epitome of the phrase ‘one-trick pony.' There's just nothing here. The hardest-core fans may want to dip in as a way to reminisce, but I'm guessing even those fans would be hard-pressed to find much value. If nothing else, I will say that the game made me want to watch the series, so that's something, I guess. Rating: 2.5 out of 10


Disclosures: This game was obtained via publisher and reviewed on the original 3DS, with and without a Circle Pad Pro. Approximately 5 hours of play were devoted to the single-player mode, and the game was not completed. 1 hour of play was spent in multiplayer modes.

Parents: According to the ESRB, this game contains: violence, blood and gore, and partial nudity. The titans are naked humanoids (sans junk) and there's one female one, so that's where the nudity comes in. The violence is seeing swords jabbed into titans' necks and having their extremities cut off. It's content that's probably best left to the oldest ones, although frankly, just skip it.

Deaf & Hard of Hearing: No audio cues were necessary for gameplay and all dialogue is delivered via subtitles. It's fully accessible.

I suppose you could say this game was a titanic failure. Eh?