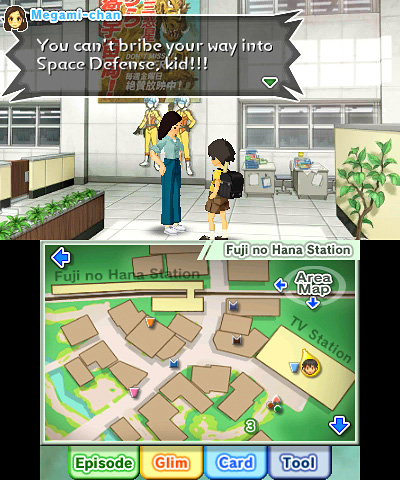 HIGH It's got charm in abundant supply.

LOW The story seems needlessly complicated, yet too shallow.

WTF The final postgame quest is a pain to complete.

Although I wasn't sure what to expect when first announced, it turns out that Japanese studio Level-5 is behind some of the most interesting selections for the download-only 3DS eShop.

These works are crafted by different directors and united under a common banner known as the "Guild" series, and to date, they've released Liberation Maiden, Aero Porter, Crimson Shroud, Bugs vs. Tanks, and The Starship Damrey—each one totally different, but all are interesting experiments in small-scale design. They're recommended.

Attack of the Friday Monsters! A Tokyo Tale is the latest to join this group, and again, it's nothing like the others, yet just as worthwhile as the rest.

The game places the player in the role of Sohta, a young boy who lives in a small Japanese village during the early 70's when Tokusatsu programs featuring actors in rubber suits (Godzilla, Ultraman, etc.) were popular. In this particular village the monsters are real, and reported to appear every Friday.

While appearances might suggest that the monsters play a key role, they're actually used only as context for the real meat of gameplay: taking Sohta around to do the sort of tasks that a young boy does in a peaceful town. He delivers laundry for his parents' dry cleaning business, has conversations with people on the street, plays games and investigates ”mysteries” with his friends, and generally spends his time in the way that only children free from worry and responsibility can.

Although I grew up after this particular time period had passed and in a different country, Millennium Kitchen has done a great job in delivering a slice of childhood's whimsy and wonder. Everyone's friendly, the dialogue is cutely appropriate when trying to figure out what a "grown up" word means, and the ritual game in which the kids command each other to fall down reminds me very much of similar instances from my own youth. Friday Monsters! feels both nostalgic and genuine in this fashion, and it gave me a warm, cozy feeling.

On the other hand, the story starts off strong but left me unsatisfied with both the resolution and tone.

With the game's premise that giant monsters are real, I thought there was a great opportunity to explore some darker themes after the bright, sunny opening. What would a "normal" childhood be like living with the constant threat of having a home destroyed by enormous clawed feet or stray laser beams? It seems to me that there was a rich space for emotional exploration here, but things never get heavy.

While I can excuse that disappointment, it was then doubly frustrating to find that the game's explanation of the monsters was overly complicated and not supported by the script as solidly as it could have been. I won't spoil it here (and it's not terrible by any means) but it seems that the best answer would have been the most straightforward one. What players actually get is anything but.

It feels a bit petulant to complain about the plot, though.It's clear that the real focus of Attack of the Friday Monsters! A Tokyo Tale is to immerse players in a bygone era of innocence which I'm sure reflects the personal experiences of the development team, and I can certainly appreciate it for that. Rating: 7.0 out of 10.


Disclosures: This game was obtained via paid download and reviewed on the 3DS. Approximately two and a half hours of play were devoted to the single-player mode, and the game was completed. There are no multiplayer modes.

Parents: According to the ESRB, this game contains fantasy violence. There's absolutely nothing to worry about here. The only violence is limited to exactly one scene where two giant figures wrestle around for a bit in the background. It's totally harmless, and the rest of the game contains nothing questionable except for a few mentions of passing gas meant to elicit giggles.

Deaf & Hard of Hearing: You will have no problems.The voice-overs are delivered in Japanese, so most players will be reading the subtitles to figure out what's going on in the story. There is no real-time action, so there are no audio cues to listen for during game play. It's totally accessible.