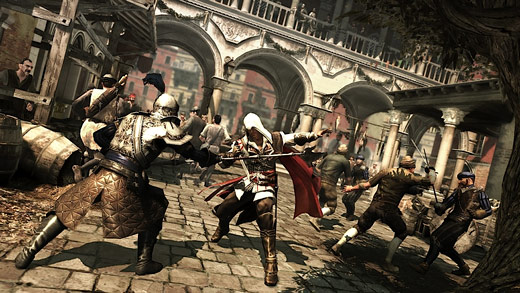 Finished Assassin's Creed II last night, and polished off a few quickie Achievements this morning. It will come as little surprise to anyone reading this blog that I was less than impressed with Ubisoft's second attempt at what I see as a superbly awesome idea.

Sadly, the adventures of both Altair and Ezio fall far short of what I would expect from such a rich, promising premise. My review is complete, but I'm going to sit on it for another day to make sure that I'm not letting it go too soon—with such a high-profile title, I'm really making every effort to ensure that the piece says what I'm trying to say. Readers can disagree with me all they like, but I want them to disagree because they actually disagree, not because they misunderstand what I'm saying. (Inevitably, both will happen.)

In a case such as this, I think the challenge is to be clear, yet concise… I rarely feel comfortable writing a review that goes longer than 1200 words, but I found myself trimming the piece back heavily. I don't like reading long reviews that blather on without making much of a point, so I can't in good conscience ask people to do that for me. With all that said, I expect to take major heat for it anyway, so I guess it's kind of academic.

In the meantime, I decided to go back to Mirror's Edge and put that to bed before starting on Uncharted 2. I was three levels away from the end when my 360 conked out on me a few months ago, and by the time I got it back, I had a to-review pile at least five or six games high.

Naturally, it got put on the back burner until I had a little breathing room, but coming back to it after all this time has passed has been a lot more difficult than I would have guessed.

The controls are fairly unorthodox and things like the walljump feel overcomplicated, but more than that, I really have to say that DICE did a fairly terrible job of level design in several instances. Certain areas seem to have no leeway for player error whatsoever, and I'm having a hard time imagining why someone on the design team felt the need to make things so stringent at times.

Besides my irritation at ledge-grabbing, I have to say that the story is pretty worthless and the cut-scenes are cringe-worthy. Going to what looks like a third-rate flash animation between levels after the devs spent so much time crafting an immersive first-person experience makes absolutely no sense to me, and I really can't imagine why they did it.

In any event, I'm doing it to say it's been done and with only one more level to go (going for the no guns Achievement, to boot) I will be glad to put it aside for something more deserving of attention.

hehe.. well, i did end up getting the ‘Test of Faith’ Achievement… it was only really hard on the last level, like you mentioned. Both of you guys are spot-on when you say it needed more refinement. i wanted to like it but it just felt so rough and underdone. i mean, it wasn’t the worst game i ever played, but it did not live up to its potential at all, IMO.

about mirrors edge (ACII is on my Xmas list, with CoD6 and others…) It had some very neat aspects, it just needed some refinement, more attention to detail and better level design.
I got the no guns achievement (more satisfying than losing you V-card) it’s ridiculously hard on the last level, i wish you luck and tell you, don’t succumb to the dark side of weapons

I thought that ME was a brilliant idea but poorly executed. Brilliant when the game allows you to pull of a few moves together but frustratingly difficult at times. Also apart from its narrow margin for error it felt like too much trial and error at times. The cut scenes i agree were of a very poor quality and the story could have been told entirely in-game (Half life style). My experience with it can be summed up like this: 5 Mins – “This is a freaking awesome game” Next 40 mins – “F…. bastards” P.S I am disappointed to… Read more »