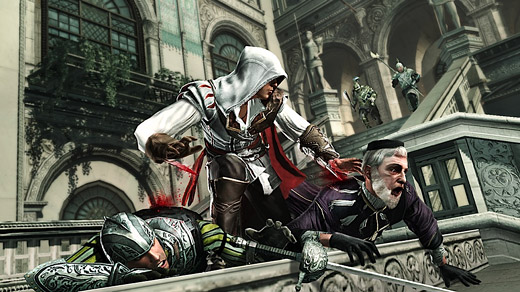 I sent out a message via Twitter earlier, but in case you missed it, here's a link to my appearance on the most recent Big Red Potion podcast. The topic was Modern Warfare 2 and the connection between games and their portrayal of wartime politics.

Many thanks to Joe DeLia and Sinan Kubba for having me on. Also, props to my co-podcaster Steve Haske from Play. It was certainly an honor, and I hope to do it again sometime.

I've got a few fairly cool features that are being cooked up as we speak, but at the moment I'm spending some time with Assassin's Creed 2. If you caught my review of the first game, then you'll know that I saw it as a huge disappointment. If there was ever a poster child for missed potential, Assassin’s Creed would be it.

In spite of my dismay, I held out hope that Ubisoft would take the copious amounts of player feedback and apply it towards the sequel, finally crafting a title that lived up to the promise. The early word was good, and practically everyone I spoke to said that the developers had seen the error of their ways and had delivered a game that "kept all the good stuff and got rid of all the bad".

I'm not done with the game, but I've put somewhere in the neighborhood of six or so hours into it so far. Initial impressions were extremely poor… the first four hours or thereabouts were extremely slow and dull, taking entirely too much time to establish a story that's not nearly as interesting as the developers want you to think it is. It also doesn't help that this giant block of time serves as an overly-extended tutorial, dragging out what could have really been condensed into a fraction of what it takes.

Getting through that part was fairly painful, and once I was done with it and got into the game proper, I can't really say that things got much better. Although I'm still reserving final judgment, what I've seen so far amounts to an exact copy of the first game with a lot of stuff I don't care about crammed into it—things like a money system, a notoriety system, managing items, and being caretaker for a property owned by your family. I suppose this is an attempt to emulate Grand Theft Auto, but I just keep asking myself why I'm supposed to care. The game is called Assassin’s Creed, and yet (just like the first installment) I'd have to say that the assassinating is probably the weakest part of the experience.

The controls feel kludgey, the stealth mechanics don't include using shadows (or even ducking), and I'm just not getting any kind of satisfaction with the tasks I'm completing. There may be a bullet-point list of new features that make this game “better” than the last, but from where I'm standing, it seems as though the developers basically left the core experience unchanged—and that's the part that needed the most work.

(Incidentally, Jim Sterling over at Destructoid seems to like it about as much as I do so far… maybe even less. He's written a pretty brutal review which I actually like a lot, if for no other reason than it's rare to see a high-profile reviewer really lay into a "top-tier" game like this one. Jim Sterling, I salute you.)

I thought it was quite a bit better than the original. Simple but fun. Right up to the time platforming segments in the final Assassin’s Tomb with ( as several people have mentioned ) slightly wobbly controls.

This was the worst designed game level I have seen in years.

In short, if I wanted to do mindless repetitive things and be punished for minor mistakes, I’d go to work 😀

I haven’t read too many reviews on this game, at least ones that seriously take a good hard look at it. It was beginning to look like this game delivered and was tempting me to buy it. The repetition and lack of variety in the first game really wore me down, and not something I want to do again. Sure, killing people is somewhat satisfying, but its not enough to make a game out of. Your take is enough for me to feel good about not purchasing it. I may rent it just to see what I am missing for… Read more »

Good comparison point. In Super Metroid, what you could do was where you were going, and if you couldn’t go past a certain point, you know you hadn’t done something yet. Games like AC2 get it wrong (for me) by never refining the controls to the point where they become second nature. I can’t think of anything that reinforces identifying with the character more than KNOWING where your jump will take you, and vice-versa.

After playing Uncharted 2, I watched my brother-in-law manipulate, what I thought, was a wax figure guided by what seemed to be a series of not-so-tight controls. I sat and watched one wax figure interact with other wax figures–their emotions pasty and fake, the storyline entirely uninviting. The repetitiveness of open-world action gameplay never enticed me to begin with. Spiderman holds a sour spot in my heart. The second half of inFamous felt more like a journey through a swamp than a city. The GTA series never really captivated me either, but maybe I just didn’t give it enough time… Read more »

Hi Jeremy. >>Well, you don’t seem to have given any credit to the work they did on the setting, for one thing. Exploring Venice and Florence as they were during the Renaissance* is something very special and unique to the medium. To be perfectly honest, I don’t think it’s really all that great. Each level is basically the same as the others with only minor differences between them. I mean, I can appreciate that they picked this time period since (like you said) it’s rarely ever used for games, but it really doesn’t have much impact on the gameplay and… Read more »

It really seems like this is a love it or hate it game. I think the problem is that everybody has their own ideal about what an assassin game should play like, and this game either does it or doesn’t do it for them. Shrug.

Well, you don’t seem to have given any credit to the work they did on the setting, for one thing. Exploring Venice and Florence as they were during the Renaissance* is something very special and unique to the medium. I think it’s a shame about the lack of fast-travel short of those very inconvenient stations (entirely unnecessary in the fiction of the game, since these are memories and there’s no reason Desmond couldn’t skip the slow travel bits), and obviously the fact that Ezio is just as prone as Altair to leap off the wrong way is a major problem.… Read more »

already sold my copy. Graphics were just ugly on the PS3. And I agree with all the above points. Might as well have added taxi missions.

I always felt that the original game was immensely over-rated and therefore just confirmed my attitude towards the majority of gaming media being complete idiots by not reviewing games properly. With that in mind I was/am more than skeptical with the response to ACII, and if I’m honest the videos I watched show me that the combat and process of assassination is as clunky and un-stylish as ever. What you’ve just wrote reinforces those thoughts for me, so I’m more than happy to give this one a miss too. Hopefully a potential new Thief game can actually highlight how badly… Read more »