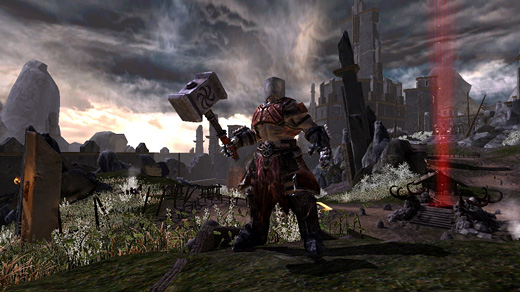 Today I had the chance to visit Signal Studios located in Kirkland, Washington, and I spent about three hours talking with the good people hard at work on the upcoming free-to-play Ascend: New Gods coming to XBLA and other platforms to be announced.

I spent the majority of my time getting a walkthrough and chewing over the details with D.R. Albright, the president/creative director/enfant terrible of Signal. It's always a pleasure to chat with D.R. since he's as candid and honest a developer as someone could ever conceivably hope to meet. He tells it like it is, and that's the way I like it.

So, what is Ascend: New Gods?

Set in a war-torn fantasy world, Ascend puts the player in the role of a Caos warrior—a rough and tumble brute dwarfed by the creatures which currently rule the land, the Titans. Interestingly, humans also inhabit this world, and they are, in turn, dwarfed by the Caos. With the disparity in size between the three races, Ascend comes off a bit like a trip to Lilliput twice over as viewed by Frank Frazetta.

Go ahead and Google those references, I'll wait. 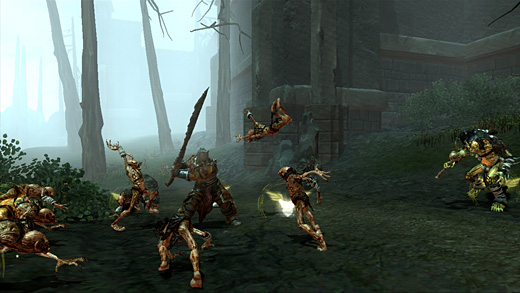 So, the game begins with the player customizing a nearly-naked Caos male. Although Ascend does not offer all available options at the outset, there were plenty of faces, skins, armor and weapons to pick from. Once this avatar is complete, the player then meets the three gods which rule over the world and must choose which one to devote his service to. The deities are dark, void, and light, and D.R. was careful to say that they're all equally terrible in one way or another—there is no clear heroic path to be taken.

Combat takes place from a third-person viewpoint, and looks solid as the Caos roams through the countryside in the service of his God. With a wide range of weapons, magic spells, and buffing runes to equip, it seems as though most tastes will be satisfied.

While this formula may seem standard at first, Ascend adds some new twists to the proceedings.

The first thing I noticed was that while walking through a level, I spotted "ghosts" of several other real players. These were actual people playing the game in real-time, and although no standard PVP currently exists, Ascend encourages interaction by allowing people to either bless or curse others. For example, if the player sees an enemy, they can take any nearby AI creatures and "send" them to the other character's world to attack them. Conversely, the player can choose to help the character by healing them or summoning support units to help them in their dimension.

A bigger twist has to do with the title of the game—the ascending part of Ascend. Although it's a little difficult to explain, the player can choose to essentially sacrifice their character as the ultimate offering to their God. The accumulated value of the character will be added to the overall value of that god's faction, shifting the world's balance (across all platforms) towards that deity. After making the sacrifice, the player is granted a new character of a slightly lower level (no getting rebooted back to level 1) and they can choose to keep a certain amount of their previous weapons, equipment, and spells. 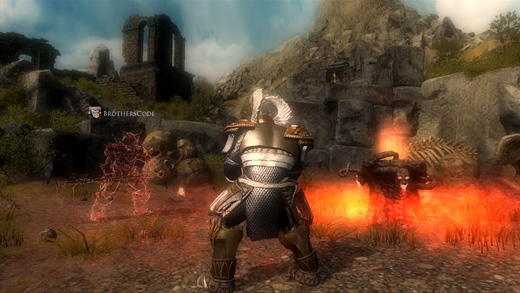 At this point, they can continue on in the service of their original God, or they can switch factions and choose to fight for a different side. It's also interesting to note that the highest-value sacrifice of this kind will be featured in a throne room that exists in every player's game, and these sacrifices can also appear as enemy bosses which try to re-take territory that the player holds.

(Although there wasn't a ton of information on it, D.R. assured me that there is a single-player campaign, and that the sacrifice/multiplayer/world control elements are there for those who want them, but are not required to enjoy the core game.)

The final twist to Ascend is in its price structure—it's free to play. Although players will not be required to put any real money into the game if they don't want to, the developers are keen to create an experience so enjoyable that players will want to kick in a few dollars towards new gear or spells. When questioned about this monetized aspect, I was told that there is only one currency in Ascend, and that every item can be earned simply by playing the game and collecting the in-game cash. Nothing is locked behind real-money paywalls, and although the final price points aren't locked in, the current value of items that I saw were quite reasonable.

Some may think that launching a free-to-play on a console this late in its life might sound like a bizarre idea, but part of the concept behind it is that even though new consoles may become a reality in the near future, there will still be millions of Xbox 360s in homes everywhere. People who don't make the jump to new hardware will still need something to play, and little brothers and sisters who get "gifted" these units can look forward to fresh content while the triple-a developers are focusing on bringing $60 blockbusters to the hot new hardware. 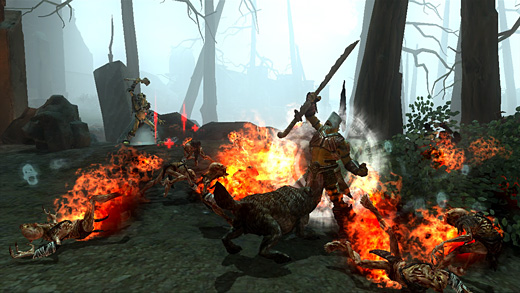 To further support this extended-life concept, they said that after the initial launch of Ascend, there are at least two more major (and free!) updates planned to be released approximately three months apart. If those are successful, then more updates will come regularly to keep this eternal war going.

Players can expect new areas to conquer in single-player, new modes, weekly and monthly community events with special rewards, and female avatars are being considered if players express enough demand for them. I shared my disappointment about the initial lack of female characters, but was told that given the large scope of the game and the small size of the team, they weren't able to set aside enough resources to develop them.

Overall, Ascend: New Gods looks to provide a new sort of console experience that bravely combines traditional single-player, third-person action, MMOs, asynchronous multi, and free-to-play elements in one bloody, monster-hacking, God-appeasing package. With the developer's eyes looking squarely towards the future and this new structure offering long-term gameplay for 360 owners who aren't eager to abandon the system, we could be seeing the start of something big here.

For more information on Ascend: New Gods, visit the official video game website. For more on the studio, check out the Signal Studios website. Infinite thanks to D.R. Albright, Logan DeMelt, Ben Hopper, Ian Scott, and the rest of Signal Studios for their time and effort in making this preview happen!