This has been an eventful week for downloads on the PlayStation 3. Flower and Noby Noby Boy are now both available through the Store, and although I think it's correct to put them both in the same general category, my reactions to both couldn't be more different. 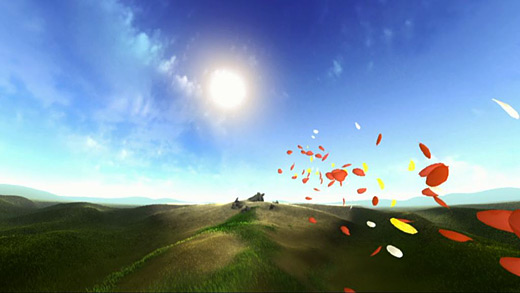 Flower is fantastic. I don't necessarily think it's the second coming as some seem to report it, but it is most definitely the kind of thing that makes a player step back and re-examine their entire conception of video games.

Taking control of a single petal from a flower, players guide this petal towards other flowers located in expansive, grassy fields and other natural environments. Upon contact, another petal is removed from the new flower to join the first, the number of petals growing to eventually become a giant, swirling spiral of color as more and more are collected. Although this is a fairly accurate description of the mechanics, Flower is much more than that. After playing through its entirety and thinking through it for a while, I think it's clear to see that Flower is almost a poem; or at least, the developer’s attempt to sidestep the notion of traditional gameplay in order to communicate feeling, or ideas.

Best played in one continuous session, there is a very definite emotional arc communicated solely through the environment. Starting in a very idyllic, peaceful setting, the game eventually takes players to darker and less hospitable areas before coming full circle with nothing less than a redemption of sorts as the flowers and the wind that carries them cleanses the land. It's difficult to fully describe in words what this new sort of language is trying to say, but it's not hard at all to experience it. I think this title is very worthy of praise, and is a beginning step towards the maturation of video games as a medium.

The other title, Noby Noby Boy… well, let's just say it's not nearly as inspirational. 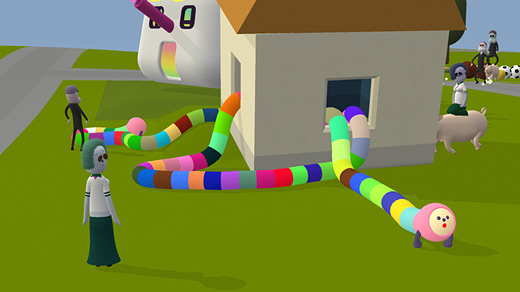 In this title, players are put in control of something best described as a squat worm with four legs. Its head is controlled with the left stick and its tail with the right. Players can make it jump, freeze position, and eat (among other things) with the central concept being nothing more than to provide players with the character and an environment to exist in.

The brainchild of Keita Takahashi, creator of the breakout hit Katamari Damacy, this project is much more difficult to embrace. After starting the game and being let loose in the first "world", small events happen as the player begins to test the rules of this virtual creature. Random people and animals will hop on for a ride as the worm grows, or some things can be knocked down if the worm wraps itself around them. It's interesting to see what kind of effects can be made to happen, but after further experimentation, I experienced a growing wave of boredom and apathy.

There is no real point to the game. There are no goals, no challenges to overcome, and thus far, I haven't felt as though there's any real message trying to be communicated. I have to admit, I fail to see inside Takahashi's mind, and I cannot fathom his reasoning for creating this project. Simply creating a virtual space and having a few things to interact with does not strike me as being very sophisticated, intriguing, or even entertaining. 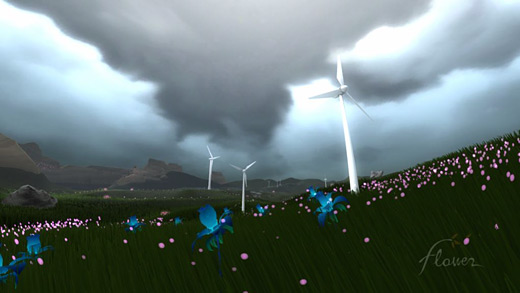 Although Flower and Noby Noby Boy both remove the majority of conceits that people would consider to be "gameplay", in Flower's case I feel as though it was done with a very specific intent, and with much consideration for the experience of the player. Noby Noby Boy seems almost the opposite; the developers have stripped away convention, but don't seem to have replaced it with anything at all. Although I certainly don't challenge its right to exist, it strikes me as a novelty for novelty's sake, and I ended my session feeling completely unmoved and uninterested.

Although I personally would say that only one of these unique projects was successful, I can certainly appreciate that they both were made available to players. Continued exposure to things that push the boundaries of what is expected of video games can only be positive, and I certainly applaud Sony for helping each of these creations find their way into the hands of those curious enough to stray from the usual First-Person Shooters and Madden updates. Regardless of the result, I'm thrilled that this kind of experimentation is happening.