Making something out of next-to-nothing 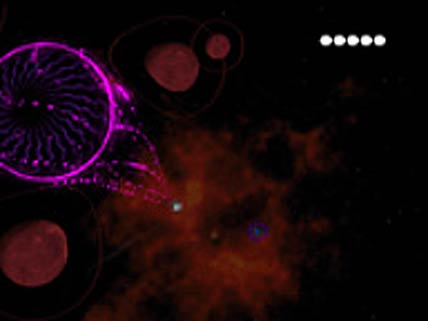 HIGH It's the pinnacle of electronic elegance.

LOW The difficulty of the extra stages verges on insanity.

WTF At only $6 for the download, it's an absurd value.

From the pre-purchase trailer available on the Nintendo Channel, it's impossible to tell what Orbient is about. It's obviously set in space: there are what appear to be planets, rings, and a lot of flowing dots, but the rest is mystery. Clearly, something is happening on screen, but until actually played, the images are cryptic at best. I'll be the first to admit that it's not the most compelling video, but those who find their curiosity piqued enough to risk the $6 download will find themselves richly rewarded.

After a brief and revelatory tutorial, it's discovered that the object of Orbient is to get a small sphere under the player's control to touch another that is of equal size, upon which it grows. After reaching a given diameter, a "target planet" is made to orbit the player's planet by passing close and remaining in proximity to it for a short amount of time. When that goal is achieved, the current stage ends and the next one begins.

If what I've described sounds exceedingly simple, that's because it is—but that's the beauty of the affair. The formula can be grasped immediately, but mastery is something else entirely.

Orbient's genius is that the only influence the player has on the drifting planetoid is to alternate between forces of attraction and repulsion in relation to the other heavenly bodies in the area.  For example, to move right, it's necessary to "push" away from other planets or stars that are on the left. When trying to approach your goal, you can "pull" towards it, but it's possible that the gravitational forces of other objects in the area might override the desired result. By relying on spatial and distance relationships in the environment rather than a traditional form of control, Orbient is able to distill its formula down to a core essence. Motion, inertia, speed, and gravity…anything more would be an unwelcome distraction.

Orbient then marries these indirect mechanics to a masterfully understated presentation which is an exact mirror of its content—the game utterly lacks even the faintest hint of pretension, and the visuals agree. Though things couldn't be simpler than the chosen array of circles and lines, the feeling of being a small speck at the whim of cosmic forces in the vast chill of space is elegantly conveyed. Far from leaving me feeling unimpressed or underfed, I found the artistic choices to be enigmatically, substantially poetic.

Simple graphics, simple control, complex gameplay; Orbient is nothing less than a masterpiece of minimalist design, and one of the most compelling examples presented for the case that video games are a new medium of art that must be recognized. More, please. Rating: 8.5 out of 10.

Disclosures: This game was obtained via online store download and reviewed on the Wii. Approximately 4 hours of play were devoted to the single-player mode (completed 1 time). There are no multiplayer modes.

Parents: There's absolutely nothing to worry about here. The entire game is made up of circles, lines, and assorted shapes.  It may be a little difficult for younger gamers, but there is no violence, no questionable language, no sexual content… there aren't even any people or living creatures in it. It's totally harmless in every way.

Deaf & Hard of Hearing gamers: No problems at all. There is no story or dialogue in the game, and there are no auditory cues affecting gameplay. Everything here is perfectly accessible.

Hey Mory. thanks for your comments. Just to clarify, I didn’t really tag the extra difficult levels as a downside or negative… I just thought they were really, really hard. ^_^ As far as art goes, I thought the game was a perfect distillation of form and function to their most base elements. I doubt this game could’ve been turned out by the average Joe Developer. call it a gut feeling, but this one definitely strikes me as being much higher on the “art” scale than a lot of other things i’ve played this year– the aesthetics dovetail with the… Read more »

I think Orbient is one of the best games I’ve played in years. The difficult “Merciless” and “Final” levels are not so much a downside. It’s not like, if you only play up to your capability, you haven’t gotten the real experience. There’s no story with an ending you’re missing out on, there’s just a collection of levels. I suspect many players won’t even realize there are 50 levels, not having obsessively chased the moon down all over the place. So it’s like in Super Mario Galaxy: there are some levels which are specifically designed for the more hardcore, and… Read more »