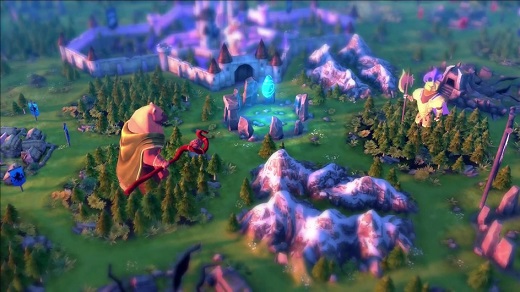 HIGH The art direction and production are superb.

LOW Losing to enemies' Prestige victories over and over again.

WTF Who thought this text was a good, readable size?

Although I don't play many tabletop games in real life, I'm always interested in seeing the concepts translated and given features only possible in a virtual medium. Shiny cards and plastic figures are nice, but animated portraits and tiny soldiers battling over a dice roll make it all the more enjoyable to me. Armello from League of Geeks fits squarely into this ‘electronic boardgame' genre.

The premise of the game is that it takes place in an anthropomorphized animal kingdom. The ruler (a lion) has become infected with The Rot—it's an affliction that grants power, but it's also a death sentence. As he degenerates, the king goes mad and makes life hard for the kingdom. In the days before the monarch dies, four animal groups (rats, wolves, rabbits and bears) each choose a hero and vie to become the next ruler of the land.

The first thing anyone will notice is how beautiful Armello looks. The graphics are clean, the colors are rich, and the style is fantastic. Apart from some text being absolutely microscopic (seriously, who thought it was remotely readable?!?) it's an attractive title with strong visual appeal. However, looks are probably the least important part of a boardgame—the mechanics are where it's at, and in this regard, Armello isn't quite as flawless.

I'm not going into minute detail on how the game is played, but there's a solid tutorial broken up into four parts and there are four major ways to win: kill the king outright, become more Rot-ridden than he is, collect four magical stones that appear, or have the most Prestige at the time the king dies.

Although it's fairly straightforward for the most part, the gist is that each player goes around the board trying to earn enough resources to win in whichever method suits them best. Clashes occur, but it generally feels like everyone's on their own track. It reminded me more than a little of the mechanics found in Elder Sign (available in tabletop and electronic formats) but that game is about cooperation. In Armello, it's every animal for itself.

Of course, it's normal to expect most boardgames to have an element of luck, and that holds true here. A lot depends on cards the player draws and on virtual dice rolls that determine various outcomes. Random objectives often pop up at the complete opposite end of the map. Sometimes the precious stones needed for a victory literally materialize in an enemy's hands. Players wanting to rely on careful strategy to win may be frustrated at Armello's luck factor.

While the randomness didn't bother me too much, something I was unhappy with was combat.

When two characters clash, there are all sorts of attack and defense stats that factor into the result. However, no matter who's attacking or defending, damage resolves simultaneously. What this means is that I would often kill a character by dealing enough damage to wipe out their HP, but since they deal damage even after they've been "killed," it usually ended up being a wash. Even more unsatisfying is that "killed" characters come back to life on the very next turn, meaning there's not much tension to it.

Readers who share my inclinations for solo play may be wondering how good Armello is for one, and I'm afraid to say that it's not great. It was disappointing to see that the singleplayer mode was exactly same as the multi, only with bots. Having a finite campaign mode or a series of crafted challenges for each animal type would have been a much stronger offering.

Compounding the lack of a true solo mode is that the Prestige method of winning feels like it's not balanced correctly. It takes a great deal of luck and resources to defeat the king, but all it takes to win with Prestige is to complete a few easy tasks and then not get wiped out before the end of the game. From my own experience it's much easier to win this way than the other three methods, and when playing by myself, the AI consistently trounced me via Prestige.

Now, I'm not saying that the bots are cheating, but it's telling that I never saw the AI win in any other fashion, and I never came close to winning when playing solo. I'm sure part of the problem lies with my own inexperience with the game, but since a session can easily take an hour or more to complete, that's a lot of time to sink into something that feels a bit stacked.

Of course, it's only fair to recognize that any boardgame is naturally better with others. Doubly so for me in this case, since the people I arranged to play with were as new to Armello as I was. With mistakes on all sides, we were on equal footing. Unfortunately, there is no local multi option (it's online only) which removes much of the appeal. Going online and waiting for a game to fill with three randoms usually took a long time, and once a match got going, the wait time for others to take their turns tested my patience. Even worse, it's common for losing players to quit before the end of a match. Honestly, it's not a great experience.

Armello has tons of appeal. The art is gorgeous, the premise is engaging, and I'm always interested in new virtual boardgames. Unfortunately, the mechanics don't feel like they're quite where they need to be, the singleplayer mode comes up short, and the online mode can be slow and frustrating depending on the other players. For those who have friends interested in a pre-arranged Friday-night session, I'd imagine Armello would be a great time. Those going solo or looking to the random community for the bulk of gameplay should take a different adventure. Rating: 6 out of 10

Parents: According to the ESRB, this game contains: fantasy violence. The swordplay is stylized and not at all graphic. There's no sexual content or questionable language. It's probably above most kids to play, but there's no harm in them seeing it.

Deaf & Hard of Hearing: No audio cues necessary. It may be nearly impossible to read some of the tiny text, but dialogue is subbed. It's fully accessible.

No local multiplayer is, sadly, an instant pass for me. Sounds like an interesting game, but from what you said it could clearly stand refinement in its balancing issues.