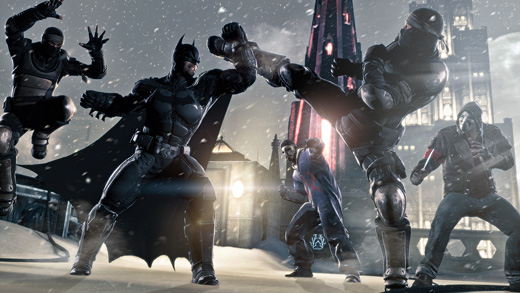 For review, I've been playing two games at once… Not my favorite thing to do, but it is that time of the year and they aren't at all alike, so playing one is kind of like taking a break from the other. The first is Batman: Arkham Origins, as mentioned in the last post. I'm finding this is a very interesting title on many levels, but not necessarily for the reasons that you might expect.

In general, I was enjoying it a good deal. It won't make my year-end top 10, but it feels like the sequel I was expecting after Arkham Asylum. Of course, everyone knows that Arkham City was the next game in this series, but that one put me right off. In fact, I tried to play City at least two or three separate times, but never made it more than a few hours in.

To begin with, I never liked the premise, and the game started terribly. Too many things were hitting me all at once, and it seemed as though the developers were assuming people would retain all of the systems familiarity from Asylum. I clearly recall getting into fights near the game's beginning that had way too many thugs, while not being able to remember how to use the gadgets, and so on. I came to City wanting to love it just as much as Asylum, but it left me cold. It's wildly overrated, I think.

On the other hand, Origins has a much better premise, and one that strikes me as something I would realistically read in a Batman graphic novel. The pacing at the beginning is much better, and it takes more time to walk the player into what's going on. I also appreciate that the main quest is uncluttered by developers trying to cram too much in.

Unfortunately, just as I was nearing the end of the game and getting ready to write a fairly positive review, I hit a showstopping glitch that rendered the game unable to be completed. It was especially ironic because I just got done telling people how few bugs I had encountered during my playthrough, and then less than fifteen minutes later, the game croaked. PR assures me that the developers are aware of this problem and that a patch is coming this week, but as of right now, it's unplayable.

The other game I'm playing for review is Skylanders: Swap Force, and it's been the best game in the series so far. However, there's not a lot to say about it, really… Apart from a number of smart tweaks and improvements it's more of the same, but since it was so fun and enjoyable to begin with, that's not a bad thing.

In between those titles, I picked up Phoenix Wright: Dual Destinies on Nintendo 3DS and gave that a whirl. The first game in the series is one of my favorite titles of all time, so I was definitely looking forward to it. The first level started off right and gave me hope that the listing ship the series had become was righting itself, but the second level was a catastrophic crash and burn… It was so annoying and overly talkative that I kept falling asleep trying to get through it.

People tell me that it really picks up in the next level, but I'm just having a real problem getting through the section I'm in right now. I'll come back to it later, but I just can't manage to force myself to trudge through at the moment.

The wife and I had a rare day and night, so we decided to take in a movie. After hearing some any accolades for Gravity, we bought a couple of tickets and wanted to see what all the fuss was about.

Overall, I feel comfortable in saying that it was good, but not great.

The performances were solid and I appreciated that Sandra Bullock basically carried the entire movie by herself. It's rare to see a role like that performed by a woman, and I'd like to see more choices like it.

In terms of the story… Well, it started off in the right direction, but my suspension of disbelief was broken by a few too many action sequences. I don't want to spoil it for anyone who hasn't seen the film, but I would have been quite satisfied with half of the events that took place, and perhaps even a different ending. By the time the credits rolled, I had lost my emotional engagement and felt very much as though I was watching a video game plot, and I don't mean that in a good sense.

The technical achievements were impressive and more starring roles for women like this one would be quite welcome, but Gravity was more of a thrill ride than an emotional one, and the movie was lesser for it.