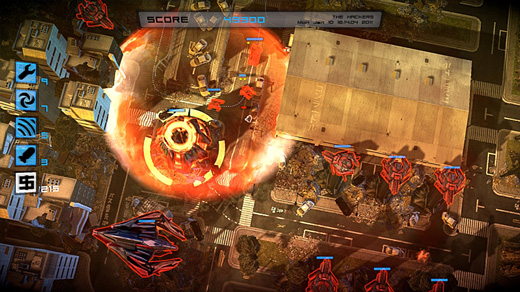 HIGH Bringing maxed-out missile launchers to bear on the enemy.

LOW Waiting one second too long to change course and getting mulched.

WTF It's never explained why your forces can't slow or stop. No brakes?

When I first found out about Tower Defense way back when, I thought it was an interesting genre. I'm always up for things that break new ground, and it was unlike anything else I had played at the time. Unfortunately, that patch of earth proved to be a little too fertile—before I knew it, every third game was some sort of iteration on the formula. The charm of placing guns and playing passively soon wore off, and it wore off hard. It was with some hesitation that I sat down with Anomaly Warzone Earth

, but I was happy to find that going from Tower Defense to Tower Offense got me interested again.

While the game tells a thin story of alien forces landing on Earth and annoying the populace, it's weak and has no bearing on play. No, the value in Anomaly: Warzone Earth is how it flips the genre's overfamiliar structure. Instead of placing towers and wiping out approaching columns of enemies, the player is now the one invading. It may not seem like much of a difference but once the troops are in the trenches, it stands apart from the crowd.

When beginning a map, an overview of each area is given and all of the enemy's defenses can be seen. At this point, it's up to the player to plot a course for the tanks, missile launchers and supply units that will invade. Once a route is plotted, troops start moving forward at a steady pace. The player is able to redirect them at each intersection as necessary, but there's no stopping them until they reach their goal or they die. In essence, it's a slow-moving runaway train that needs to be guided safely to its station.

(As an aside, there were several times during gameplay when I wondered exactly why I couldn't tell my troops to stop or slow down, and there's never any logic given for it. Their brakes don't work? They're uncontrollably enthusiastic? I guess it's one of those things that a player shouldn't think too hard about….)

In any case, the units plow ahead like sluggish locomotives loaded with weaponry, and they target enemies automatically. During this time, the player controls a single super-soldier on the field who can use different abilities to safeguard the caravan – healing, a smokescreen, a decoy, and an airstrike. The defending aliens have no lack of firepower, so putting these abilities to use is of the utmost importance. A fully-powered chain of units is fierce, but it can still be reduced to scrap without a decoy to draw enemy fire away, or an airstrike to eliminate nasty chokepoints.

Anomaly: Warzone Earth is an interesting spin on a formula that's become too static. It requires clever thinking to take a well-entrenched formula like Tower Defense and turn it on its ear, so I appreciate this novel reinterpretation. However, while charting a course through deadly, alien-infested streets was pleasant enough, the basics of gameplay are quickly grasped and there's not much surprise in store.

I found the same basic strategy of train-building served me well with little reason to deviate from it, and with just a few units to unlock and maps that are very similar in nature, things settle into a pattern too soon. Without much diversity in play or a strong story, I was happy that the campaign ended when it did. Don't get me wrong, though—the game's over when it runs out of tricks, and that's always the best place to call it good. There are extra modes for those who crave more, but I was content after the six hours or so needed to roll credits.

is an interesting take on a genre that's become painfully stale at this point, and I congratulate the developers for finding a new angle. It's solid and the reversed structure carries it through to the end, but more depth and variety are needed to make it more than a brief curiosity. It may be different than anything else in its genre, but the trip on this particular train lacks the kind of spark that would make it a memorable one. Rating: 6.5 out of 10.


Disclosures: This game was obtained via publisher and reviewed on the Xbox 360. Approximately 6 hours of play were devoted to the single-player mode, and the game was completed. There are no multiplayer modes.

Parents: According to the ESRB, this game contains fantasy violence and language. The content in this game is extremely mild. None of the "language" stands out in my mind, and the violence consists of alien robots being blown up by missiles and guns. It's totally tame, and should be acceptable for a wide range of players including younger ones.

Deaf & Hard of Hearing: Subtitles are provided for the story, although they are very small in font size. The only significant audio cue during gameplay I found was when supplies are dropped by friendly aircraft. Fortunately, these pickups appear on the map, so it's very simple to see whether they are present or not. Otherwise, sound is not necessary for gameplay.