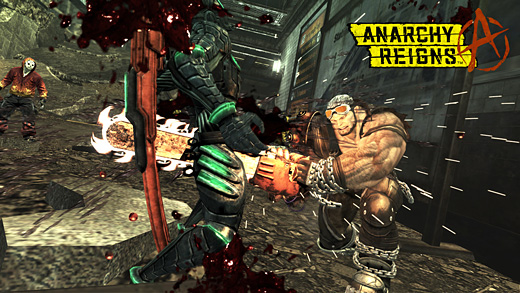 LOW Not realizing there was an elevator behind the tentacle.

I'm not much of a competitive multiplayer guy. Never have been, never will be.

As such, when I got word of a budget-priced multiplayer game featuring the lead character from MadWorld (something else I'm not a fan of) I paid very little attention, and felt justified in ignoring it. Even so, I threw it on my GameFly queue "just because" and I'm glad that I did—Anarchy Reigns

is a very different beast from Madworld, and packs a surprising single-player campaign on top of the multi madness.

This latest release from Platinum Games is essentially an old-school beat-'em-up at heart, but dressed up with enough flash and craziness to make this time-honored formula feel new again. Everyone and everything in the game is either a mutant or a cyborg, and there aren't any standard punches or kicks—every strike explodes, shoots electricity, has an energy blade attached to it, or is somehow impossibly acrobatic. Jump kicks go for miles, entire crowds of enemies can be shredded with laser claws, and targets often explode in bloody messes. It's so over-the-top that there is no bottom, and Anarchy Reigns revels in it.

Checking out the online side, there are a large number of game types and I had no problem finding matches and getting into the action—technically speaking, it was all smooth as silk. However, the combat is lightning-quick and there are usually a large number of other players (up to 16) involved. I found it quite difficult to keep situational awareness high with people running, jumping, and dashing over the place. All too often, my attacks would be interrupted by someone grabbing me from behind, my about-to-strike kill move would whiff thanks to a crowd of opponents crashing in, or I would rapidly get taken out with little ability to counteract it. It's frenetic, chaotic stuff.

Also taking away from the multiplayer for me was the lack of customization. It was a little disappointing to see that all of the characters in the game control identically despite each combatant having their own fighting style and signature moves. This uniformity cuts down on the learning curve in a big way, but it also means the game doesn't feel as deep or as nuanced as it could. Adding to this simplicity is that there are no unlockable/selectable moves or any way to alter the stock characters apart from simple color swaps and some perks. Having the ability to equip accessories, change skins, or somehow be able to make my own characters stand out from the crowd might have given me more motivation to press forward online. 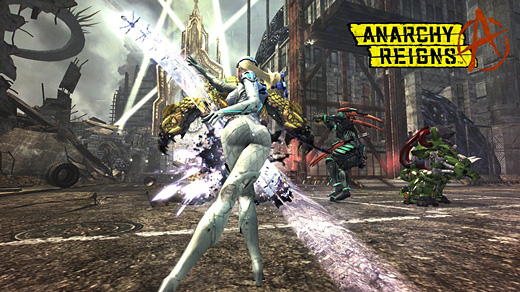 If the online battling was all there was to the game, I wouldn't be writing this review. However, I was surprised to discover that the developers have included a fast-paced single-player campaign sporting high production values, a crazy cast of characters, and the kind of hyperkinetic, super-action cutscenes that are the stock in trade of Platinum Games.

At the beginning of the campaign, the player picks between chainsaw-wielding bounty hunter Jack or energy blade user Leo, a cyborg who wouldn't look out of place in a Metal Gear Solid lineup. Without getting too deep into the details of the story (and honestly, the story details aren't really that deep) Anarchy Reigns has everybody fighting everybody in the pursuit of a runaway super-soldier. The game must be completed with each character in order to get the full story, and I expected the missions for Jack and Leo to be carbon copies of each other. However, I was glad to discover that the two of them have very few missions in common.

For example, one level might be a straightforward brawl, the next might pit the player against a swarm of giant mutants, the next has the player hanging from the underside of an airborne gunship, a bartending robot might need an escort later on, and a boss battle with an enormous squid ends with the beast being cut in half with a blade the size of a building. The value of this design is that it takes what would otherwise be a simple, repetitive beat-'em-up formula and keeps things fresh from start to finish. The developers are quite creative in finding different applications for their core gameplay, and none of it ever overstays its welcome.

Delivering a "Platinum" performance in each bite-sized objective awards enough points to unlock the next mission, and if the player is able to deal top-quality beatdowns consistently, the story mode just flies by. On the other hand, poor performance means that the player might need to retry certain sections a few times before earning enough points to move ahead. Between the two halves of the campaign, I only found a couple of missions that presented any real annoyance, and I deeply appreciated that the overall pace of play stayed high throughout.

Some may find it bizarre that I found the single-player mode of an online multiplayer game to be the best part of the experience, but I absolutely did. I love the style and design of the characters, the combat engine is solid, the campaign hums with a series of oddball missions that kept me on my toes, and the cutscenes were just as exciting anything that's being produced today—and in fact, they're better than most.

is an attractive, bombastic entry that retails for half the price of a normal title while delivering a fantastic level of quality. If you ask me, smaller-budget titles that try to do something different should be supported and celebrated—definitely give this one a shot, but keep an eye out for double chainsaws approaching from the rear. Rating: 8.0 out of 10.

Parents: According to the ESRB, this game contains blood and gore, intense violence, partial nudity, sexual themes, strong language. All of the warnings given by the ESRB are on the money. There's loads of salty language, all kinds of bloody violence, and nearly everyone in the cast is hyper-sexualized except for the mutant freaks, or the mostly-metal cyborgs—and even some of those are kind of sexy. As an adult, I think this stuff is great and I really enjoy it when I'm in the mood, but it's definitely aimed at older players. Keep young ones away.

Deaf & Hard of Hearing Gamers: I didn't have any problems playing game with the sound off. Although audio cues can sometimes give hints about players who are currently off-screen, the action is so fast and frenetic that it's not much of a benefit. Besides, the game displays all relevant information on-screen, so looking at that is frequently more reliable than trying to listen for things. All dialogue is subtitled, so the cutscenes are fully accessible.