We're recording the next GameCritics Podcast this Friday (2/8) and our topic is:

"What three games are you going to dig out of your backlog and play in 2013—and why?"

If you want to play along with us, send us your three picks and we'll read 'em on the air.

Also, we're taking general questions—any and all questions. Game-related or otherwise, ask us anything and we'll answer it on our pod!

(BTW, we ran really long last time and had to cut out two segments… We still have the Qs from that session and will be getting to them this time. Sorry 'bout the delay!)

So, what have I been playing?

Believe it or not, I had never tried Cave Story before, and GameFly sent me the 3D version, which was pretty, uh, awful. I was quite confused by how poor it was after hearing it praised by so many for so long, but @Dezm0nd and @Duckols came to my rescue by telling me to ditch the 3D version and go oldschool 2D with the version on the 3DS e-Shop.

That was the best advice anyone could have given me, because this older version clicked with me immediately and I ended up thinking it was pretty fantastic. It's rare that something so celebrated turns out to live up to its reputation, but in the case of Cave Story, all of the happy talk was true. The 2D version is totally, totally recommended.

Interestingly, another game released by the same developer hit the e-Shop the day after I completed Cave Story.

I jumped right into that, and although it wasn't nearly as deep or as polished, it was still enjoyable. Ikachan takes place in one huge level, and tells the story of a squid who rescues sea urchins in a space ship because… well, I'm honestly not sure why, but it's a thing that happens in the game and it ends up being a good time. It was a quick play, somewhere in the neighborhood of two hours or so, and a thumbs up.

The rest of my plays on the 3DS haven't been as successful. I gave Vampire Blood a try since it looked like it might be a neat kind of action/item-heavy game, but it turned out to be total crap.

I also got sick of the poor controls and generally rough design in Tokyo Crash Mobs as well. I like the crazy FMV style that has, but the actual gameplay barely holds together. It's more frustrating than fun, and I don't need that in my life.

NightSky is a physics puzzler that started out well, but turned me off with the way the developers kept changing the rules and powers available to the player without any rhyme or reason. The whole experience felt very inconsistent and haphazard, and those are two qualities I don't like in my games.

Apart from the handheld stuff, I'm still cruising through my backlog and selected Dead Space 2 as my next "catch-up." I won't be doing the review for Dead Space 3, but with everyone talking about the newly-released third installment, I figured it was time that I got around to the second.

I'm still early in the game, maybe three hours or so, but it's going alright. It does basically what I expected it to and that's fine since I'm in the mood, but there haven't been any big surprises or interesting twists yet. I'm guessing this will probably be one of those that I push through and finish, and then completely forget about a day or two later. 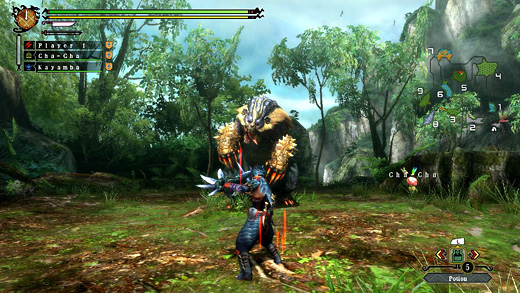 First off, another plug for @Kotowari's Monster Hunter Beginner's Guide. Monster Hunter 3 Ultimate hits the 3DS and WiiU in March, and I'm hoping that a lot of you out there who haven't tried the game yet will decide to jump aboard. If you do, be aware that Monster Hunter has always been utterly terrible at welcoming newcomers. Even though it eventually became one of my favorite games of all time, I fully admit that my first few experiences with the series were nothing short of awful. Avoid all that headache by checking out this beginner guide… I've looked through it myself, and the information inside there will be absolutely invaluable to any first-time hunters. Seriously recommended.

For even more Monster Hunter info, one of the best places on the Internet is the Teamwork Podcast. There are a whole series of videos showing the group taking on monsters of every level from every game in the series, and they engage in some great chat while they do it. I was lucky enough to be on two separate episodes, and questing with these guys is serious good times. Apart from the videos, they have a new system where people can meet up for online questing, and they're always happy to answer questions of any kind. These guys are good stuff.

While I'm on the subject, you may be interested in hearing that there are special Monster Hunter-themed cases made to fit both the 3DS and 3DS XL. These things are pretty sweet-looking, and you can check them out right here. I was doing some searching myself, and surprisingly, there really aren't that many custom pieces available for handhelds… if this sort of thing tickles your fancy, you might want to jump on it.

Finally (hey @Nightdreamer, are you sick of hearing about this yet?) my awesome, awesome wife @Ginagallaway made me a custom Tigrex coffee sleeve that I can take with me anywhere I go. Getting caffeinated while showing off my love of Monster Hunter has never been so easy or stylish!

In case you're wondering how she came up with it, I first looked at a picture of the Tigrex symbol (easily Googled) and made an analog with perler beads. I had to eyeball it myself, but I think I came pretty damn close. I had to make a few adjustments here and there, but hey. Once I had the pattern, each individual bead equated to one stitch on the coffee sleeve, so all she had to do was copy it one-for-one and it came out exactly right.

I'm over the moon about this thing, and currently thinking about having her do another one for me… I haven't decided on the next monster, though.

I don't cover music too often, but DuckDuckPunch reached out to me from Minnesota, wanting to spread the word about their new video (above) and their first album, and I could hardly say no to that. If you like Electronic-ish-type stuff, you might want to check 'em out.

Apropos of nothing, I wanted to mention that my wife recently made salmon jerky for the first time, and not only was it ridiculously delicious, it was a hell of a lot cheaper than buying it.

Cleaning the fish and stripping the meat was kind of a process, but so worth it. It didn't take nearly as long to cook as I expected, either… Just about one whole day, so not too bad. Homemade jerky: recommended.

I had really hoped that Nintendo would have momentum going into the launch of Monster Hunter 3 Ultimate, that way there would be a chance for an online community at the time of its launch. All Monster Hunters come with a learning curve and a large community of people to help newbies would go a long way toward giving this game traction in the West. As it is right now, the 3DS may have to be enough. Hopefully, the games are just as good on both platforms.