If You Seek Amy 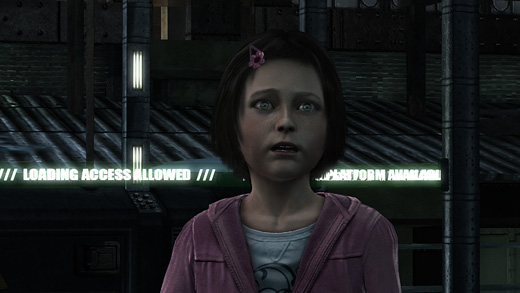 LOW Feels like it was designed ten years ago.

WTF Marcello is the creepiest good guy, ever.

When crafting a rewarding, memorable video game, a great premise can go a long way towards achieving that goal… but there's a lot more to it than that. No matter how clever, one idea can't carry a title without the support of the other aspects; an ingenious notion lacking the fundamentals is simply not enough. Amy

, from developer VectorCell, is a perfect example of how striking out with a fantastic idea and little else will inevitably end in tears.

Although it didn't get much pre-release publicity, those keeping tabs on upcoming projects had noted Amy's intriguing premise: a plague turns humanity into zombies. The twist? Lana, the player's character, is infected and she can only hold on to her humanity by staying in close proximity to a mysterious young girl named (wait for it…) Amy. It was also said that players would need to closely manipulate their infection level in order to sneak through areas plagued with the undead, among other things.

This idea of being various degrees of undead while caring for a precious partner caught my attention immediately, but the game suffers from so many base issues that playing it was little more than a constant exercise in frustration. I honestly can't conceive of any circumstance where a game with this many poor design decisions got all the way through the dev process to be released in its present state.

Amy starts off horribly. After the opening cut-scene of Lana and Amy escaping from a research facility on a train, the developers fail to set the proper tone—something essential for a horror title. The train crashes, Amy disappears, and Lana expresses no distress whatsoever upon encountering a zombie and pummeling it into a red mist. She then meets the creepiest NPC ever created, and they immediately team up, no questions asked.

There is no context given for the world in which Amy takes place, so it's hard to establish the proper mental mindset. Is this supposed to be weird? Is it not? No one seems to bat an eye when an utterly enormous, inhuman monster appears, and hazmat-suited soldiers killing civilians don't ring alarms for anyone, either. Lana uses a futuristic DNA-based lock picking device with no hesitation, and no comment is given upon finding newspaper fragments explaining the transformation of the world's populace a few minutes after the train crash. If no one in the game displays any relatable emotion or reaction to this world and these events, then how can the player be expected to connect? 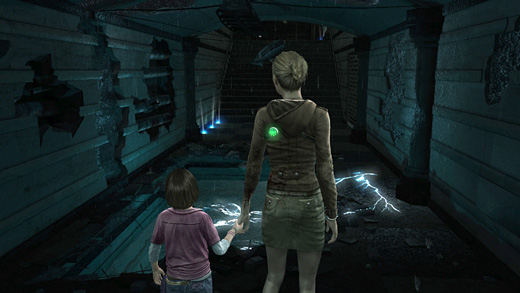 In terms of design, Amy feels like a throwback from the previous decade. For example, the controls are stiff and fussy, and Lana needs to be standing in just the right spot to pick up an item. From the start of the game, the developers take a hard detour into Locked-Door-Needs-Keycard town and then proceed to craft the world's most improbable train station. (Of course, each secure room has a convenient Amy-sized doggy door for ease of access…) In another instance, Amy can use psychic powers, but she must repeatedly copy a glyph from a wall to a tablet she carries rather than "learning" it and using a cooldown. The vital healing syringes and weapons Lana uses to fight off the infected? Employ them to the fullest degree before moving on to the next level, because they don't carry over.

These types of design choices might have been tolerable when developers were still coming to grips with translating play mechanics into 3D space for the first time, but the industry is long past that awkward phase. It's as if VectorCell hasn't played anything since the early PlayStation days, and are ignorant of every design advance since then. Relying on inconsequential tasks for core gameplay and retaining outdated player inconveniences isn't acceptable.

Amy is just as creaky, technically speaking. In the very first section, the environment was so dark that I literally could not see. I had to turn the in-game gamma all the way up, and then increase the brightness on my TV an additional 50% before I was able to maneuver in the area. I get that the developers were trying to set a mood, but "blind in pitch blackness" isn't the best choice for a video game. The combat is crude, cumbersome swinging of the sort that might have been created before the term "melee system" had a meaning. Checkpoints can often be too far apart, and my sympathies to those who have to step away from Amy before the current chapter is complete. The developers don't seem to have heard of saving, so all progress is lost if the game needs to be turned off before reaching the end of a level—usually about an hour or so.

Everything I've noted was bad, but the absolute worst part about playing Amy

? There's so much untapped potential here, and a fantastic premise is going to waste by adhering to designs and concepts that have been outdated for years. I might understand if the development team had isolated from the rest of the world for the last decade, Gilligan­'s Island-style, but I can hardly imagine that to be the case. Amy should never have gotten off the drawing board and into production the way it is, and I genuinely regret that it didn't turn out better. Rating: 2.5 out of 10.

Disclosures: This game was obtained via publisher and reviewed on the Xbox 360. Approximately 3 hours of play were devoted to the single-player mode, and the game was not completed. There are no multiplayer modes.

Parents: According to the ESRB, this game contains blood, intense violence, language, use of drugs. The game is creepy and there is a fairly intense quality to it. It's dark, death comes quickly, and the monsters are scary. It's definitely aimed at mature players, so keep little ones away.

Deaf & Hard of Hearing: You shouldn't have too many problems. cheap fake ids that scan All dialogue has the option for subtitles, and the presence of most creatures are announced by brief cut-scenes. I did not complete the game, but I did not notice any areas that rely on audio cues during the portion that I played through.

Do not buy!! It’s crap!! Junk!! No good!! You’ve been warned!! Buy something else!! It’s so bad you will feel like you have been ripped off!!