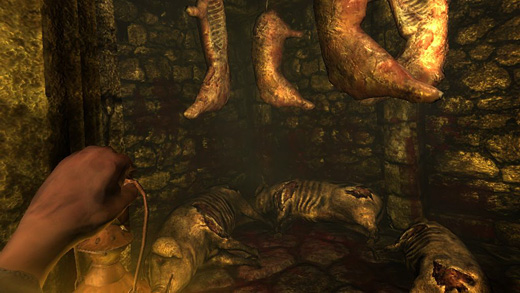 Well, this week was the week I was going to start with making good on one of my New Years' Resolutions: play three PC games. Unfortunately, I hit a bit of a snag since Amnesia: the Dark Descent stubbornly refuses to play on my system, despite my setup having more than enough resources to do it justice.

I took a quick peek at the Frictional forums for some help, and apparently there are at least a few other people who are having the same issue that I am… the bad thing is that as far as I can see, there is no quick answer or fix.

I'm not tech-savvy enough to figure out how to get the game to work on my own, and I've got zero patience for technical issues like this.

Despite all of the various tech problems that have been popping up with console games lately, they remain plug-and-play for the most part. Futzing around with non-running titles is one of the biggest reasons why I quit the PC scene a decade ago, and I'm really disappointed to find that the same issues are cropping up for me now.

That said, I'm not quite ready to throw in the towel… there's a solution out there somewhere. I'll keep working on it.

On the other hand, I have been making progress on one of my other Resolutions: clear out my XBLI backlog. I've currently got more than two hundred game trials sitting on my hard drive to be looked at, so this project is going to take a fair amount of time, but still…

Basically a point-and-click adventure, it's got surprisingly good production values and has a sufficiently creepy atmosphere. I can't talk about the story too much without risking a spoiler, but the gist is that the player is trying to unravel some events that have to do with a serial killer. It's not quite as clear-cut as it seems, though.

Anyway, I definitely enjoyed all three parts, although I began the game under the mistaken impression that there were only three. When I got to the end of the last segment, it became pretty clear that there is at least one more to come. At least, there better be… if there isn't, then that was pretty much the worst ending of all time.

Each section has solid, logical puzzles for the most part and each segment flies by, provided that you don't get stuck for too long. I'd estimate between 15-30 minutes for each.

After Decay, I took a stab at The Adventures of Captain Becky.

The gist of this one is that the player takes control of (surprise!) Becky, and pilots her through a series of very simple one-screen platforming-style puzzles. I don't quite understand why Becky uses a spiked mace for a weapon, but then again, I don't think this game is supposed to make much sense.

The action and structure of the game is actually a little above-par as far as some of these indie games go, though that's not to say it's fabulous. No, I think the real draw here is that Becky is rendered in quasi-Anime "hot girl" fashion, and each level awards her a new outfit provided that the player makes sufficient progress.

Taking this fanboy appeal one step further, the game offers a shockingly-detailed character editor where the player can modify Becky's appearance. I can't say that the graphics are good enough to sell the package, but the level of sophistication that was attempted in this mode alone far surpasses most of what I've seen on XBLI.

If nothing else, it's something different.

I just started this DLC myself, and one of the first things that occurred to me was that I have no idea how Capcom released the game in the state it's in. Everything is basically fine in singleplayer mode, but it's pretty obvious that the developers intended it to be a co-op experience at heart. Given that fact, I have to wonder how it got the green light when my co-op partner gets kicked out of the game every time I save my data.

Not only is it incredibly annoying to have to invite and re-invite, my partner loses their items every time they get booted, meaning that all of the life-ups and weapons they had got flushed. The game also randomly drops aside from the saving problem, so there are clearly some major issues with how this game works cooperatively. I've heard this was also an issue in the full-retail version of Dead Rising 2… What the hell, Capcom???

Just a quick word on the Vertigo-published series, Preacher. I finished the ninth (and final) collected volume, and now that I've had a chance to read the entire series, it really has been one of the best things I've read in a long time.

It's received plenty of praise since it was first published, and now that I'm familiar with it, I definitely agree that all of the kudos were very well-deserved. If you're looking for a quality comic to sink your teeth into, and you don't mind a read that gets a little graphic and profane at times, Preacher definitely comes recommended. Thumbs-up all the way.

Glad to hear I’m not the only one having Amnesia problems. ^_^

I’ll give it one more shot and if it doesn’t work then, then I’ll wait for an XBLA release. ; )

Also, Planescape is DEFINITELY on my list to play in 2011.

You guys must be the unluckiest people… As a PC gamer, I have not had nearly as much problems as you encountered. Richard, please please help them!

As a temporary solution, I’d suggest Brad to start with Planescape Torment, which runs smoothly on most PC, even on my 10-inch netbook. If even THAT doesnt run, then I think some higher being are on your case and simply doesn’t want you to play on PC.

Prechear Rocks!!! One of the best comic books I’ve ever read. I suggest also the Hellblazer run by Ennis too.

My latest hour of absolutely wasted time because of patch issues went into Crysis Warhead. Downloaded it on steam, it said it was finished and ready to go, it loaded, but all character graphics were missing. After some restarts Warhead suddenly realizes that it actually has to download some MBs of a patch. Started again, loaded fine… but the damned characters weren’t animated, were just magically sliding along their paths. Damn game. google… The solution was to start a new game, again. So sometimes stubbornly take the same actions again and again will at last help… Coop in UT3 is… Read more »

I also had huge problems getting Amnesia to run. It would just crash on my without warning. What helped in my case was installing the latest OpenGL drivers for my graphics card. I didn’t notice how terribly outdated those were, since 99.5% of games these days use DirectX (the 0.5% is Amnesia ;-)).