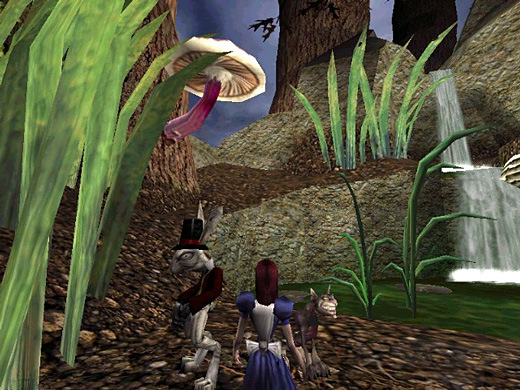 HIGH A more interesting version of Wonderland than the sequel's.

LOW Every aspect of production and control is painfully rough.

WTF A pile of different weapons, but only a couple worth a damn.

, I had to admit that it was hard to know where to begin. Technically speaking, the game is a DLC add-on to the recent sequel, Alice: Madness Returns and not a stand-alone title. It's also the first game in the series, a cleaned-up PC port, and happens to qualify as a retro-play since the game was originally released in 2000—nearly twelve years ago.

Clearly there are several mitigating factors here, and as a critic, it's difficult to figure which lines to draw, or how to properly frame my impressions. After all, there's no point in slagging a game that was produced an aeon ago (tech-wise), but on the other hand, it's being released to current gamers as an incentive to purchase the sequel. I do see some value in evaluating what it offers. Either way, it's a tough call.

American McGee's Alice is a third-person platformer that builds on the story by Lewis Carroll and twists it in a slightly different direction. In this iteration, Wonderland is a mental construct existing inside young Alice Liddell's mind, except it's been warped and decayed by the traumatic pain of her family dying in a fire. As the sole survivor of the blaze, Alice has been sent to a sanitarium and must heal Wonderland in order to regain herself.

I love this premise and I don't think that enough games take a psychological approach the way Alice does. For that, I appreciated it. I also think it's interesting that much of the level design is conceptually superior to Madness Returns, in that not every area is built around excessive platform jumping. Alice also wisely avoids the error of a bloated runtime by ending long before it has a chance to go stale. When seen from these perspectives, it's actually better than its own sequel. However, it's hard to get past all of the things the game does wrong—or, to be more specific, it's hard to go back to something that was created so long ago. 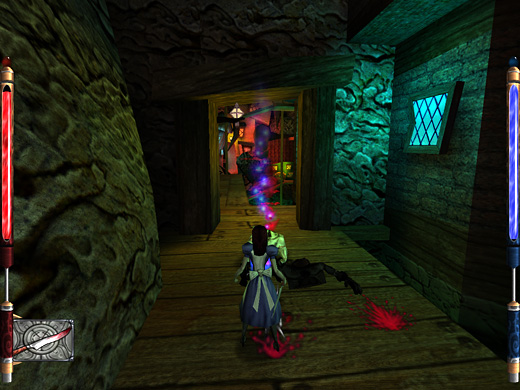 The first thing I noticed is that the game doesn't have any sort of melee system. Alice has a number of weapons, but combat is standing in front of an enemy and exchanging blows until either side dies. This isn't a successful strategy, so I suspect most players (like myself) will rely heavily on the ranged options. Unfortunately, while most melee weapons have a distance attack, they're incredibly poorly-balanced and only a few are worth using. I found myself employing the croquet mallet and the jacks for the entire game—t was repetitive and boring, but necessary for survival.

In terms of visuals, Alice does quite well for itself given its age. The art direction is certainly strong, and many of the areas were interesting and varied. Speaking only of appearances, I would say that it holds its own. On the other hand, each level feels very roughly constructed… it's been quite a while since I played a game of this sort, but it was produced back when developers were still using raw geometry to construct haphazard areas rather than actually taking the time to create specific, navigable routes. It's a little hard to describe this quality, but it's as though the player is expected to chance their way over slopes which may or may not hold them, and to try and maneuver intelligently over and through areas that don't offer clear pathways.

Expecting players to make precision jumps under such conditions is a bit on the torturous side, so it's a relief that Alice doesn't ask it of the player nearly as often as its successor does. However, making jumps of any sort is unpredictable and saving immediately beforehand is strongly advised. In fact, players should get used to manually saving every few seconds or so. Between unexpected enemies, unpredictable jumps and many, many occasions where Alice can die instantly, this is the sort of try-and-try-and-try-again experience where progress is made in brief snatches after multiple re-loads of the last save.

There are a number of other problems in Alice sure to induce rage. The handful of underwater swimming sections are pure pain thanks to a limited air supply, incredibly aggressive fish and the tendency to get caught on underwater geometry. The boss battles are messy, brutal affairs that don't provide the player proper feedback and are entirely too lethal for how weak the combat system is. The camera often swings in wild directions, and there are instances where it's difficult to tell where to go or even what to do next… without an FAQ handy, some of these bits are fairly quitworthy.

Although the reality of playing through this title was more arduous than I had bargained for, I was honestly glad to finally get a chance to play American McGee's Alice

on a console—If you asked me to write a video game "bucket list," it's one of the titles that would have been on it. However, despite the psychological premise and my appreciation for seeing the design differences between Alice and Madness Returns, the experience of playing was simply not enjoyable. I suspect this game "had issues" when it first came out twelve years ago, and those problems are only magnified in comparison to the advances in modern game design and production.  It was an interesting thing to play from a critical perspective, but it's not something I'd like to repeat anytime soon. Rating: 4.5 out of 10.

Parents: According to the ESRB, this game contains blood and gore, sexual themes, strong language and violence. Despite being based on a franchise that's generally seen as being "for kids", this interpretation is most definitely not for the young ones. Many of the areas are extremely creepy and would probably induce nightmares in young ones, and while the combat takes place against fanciful creatures, it does have a brutal edge to it. The cut-scenes are definitely slanted towards older viewers as well. Keep the little ones away.

Deaf & Hard of Hearing: You should be aware that music cues and some sound effects often signal the approach of enemies or "dangerous" areas. However, combat does not depend on these cues very much, and most enemies are clearly introduced visually. For dialogue, the game does offer subtitles.