Stealth and Pistols, all the way 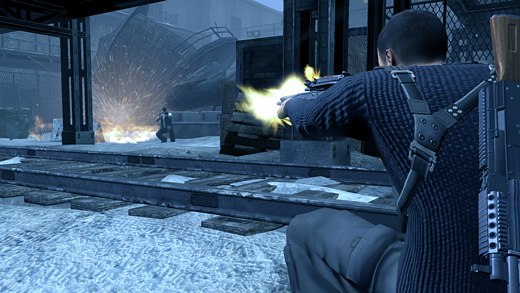 HIGH Unleashing my pistol's special attack and headshotting six goons at once.

LOW A lack of prompts making me miss the chance to rescue a main character.

In his main review of Alpha Protocol, Sparky calls out a litany of things that are wrong with the game, and he's not wrong for doing so. It's an indisputable fact that the final product produced by Obsidian fell substantially short of expectations. So much so, in fact, that Sega wasted no time in announcing that there would be no possibility of a sequel thanks to poor critical response and equally poor sales. From any perspective, it is certainly fair to call this Espionage RPG a failure, but personally, I wouldn't call it a complete disaster—what occurs to me is that there are two distinct halves to the Alpha Protocol experience: the action side and the RPG side. While the action content is certainly what brought the game to its knees, I quite enjoyed the role-playing.

Looking first to the action, it's inexcusably clunky, awkward, and painfully archaic. While I can appreciate the attempts to blend RPG elements with real-time combat, Obsidian completely failed to create something that can be called acceptable by today's standards. In fact, the studio's CEO Feargus Urguhart has been quoted as saying that there were concerns about quality during development since the team had never attempted that type of gameplay before, and obviously, those concerns were well-founded. I could rattle off a list of at least a dozen things that are bad or broken here, but there's no point. The bottom line is that anyone coming to Alpha Protocol for the gunplay is going to be bitterly disappointed.

With the knowledge that the gameplay between cut-scenes is generally horrific save for a small handful of inspired sections, I can definitely say that the RPG aspect of the game is much stronger, and worth seeing for players who don't mind pushing through a little pain to get to the good stuff.

The thing that stood out most to me was that it genuinely felt as though Obsidian was trying to break new role-playing ground in a few different ways, and I'd say that they were mostly successful. For example, the game takes its espionage slant very seriously and spends a lot of time reinforcing the theme by providing plenty of e-mail, dossiers, and mission debriefings. It may sound a little dull to have so much reading at hand, but I actually found it to be quite engaging. Doing legwork before a mission and then discovering the fallout of my actions afterward gave each segment a feeling of weight and consequence that was quite appreciated, and as a result, the feeling of being a spy was well-communicated.

I loved the fact that not every mission devolved into combat. Certain segments like quietly infiltrating a yacht at sea or doing long-range surveillance through a sniper rifle's scope without ever firing a shot were real high points. I also got great satisfaction from the missions that were solely about talking. Simply having a conversation at times and building relationships with characters over the course of the game did more for its premise than any amount of sneaking or headshots could.

For players who enjoy the kind of decision-making and character interaction that can be found in games like Mass Effect or Dragon Age, Alpha Protocol offers its own distinct spin that is certainly worth a look. While I admit that I wanted to put the game down and not come back during my first playthrough, I'm genuinely glad that friends convinced me to re-spec my character and give it another chance. (ProTip: go Stealth and Pistols, maxed out.)  By the time credits rolled and Mike "no N" Thorton completed his mission, I was actually tempted to go back and play through the game again, making different choices and forging new alliances.

It's a real shame that Obsidian wasn't able to deliver a level of action commensurate with the role-playing. Once I was able to see past all the warts, there was definitely something of value underneath, and if there ever was a game that deserved an improved sequel, it would be this one. Hopefully people in the industry will take note of the parts of Alpha Protocol that worked, and build on them through new titles in the future. If there's any justice in the world, Thorton's mission will not have been in vain. Rating: 5.0 out of 10.

Disclosures: This game was obtained via publisher and reviewed on the Xbox 360. Approximately 8 hours of play were devoted to the single-player mode, and the game was completed. There are no multiplayer modes.

[quote=mythofheaven]If I play an RPG, I want to have a customizable experience, I want to have a choice. If I could only play the game one way and it was an RPG, well that just does not cut it, that is not an RPG, and it is definitely not an average RPG as your score denotes.[/quote] That’s pretty much the way I felt about it too (obviously). If the best thing you can say about an RPG is that it’s a slightly worse version of Splinter Cell: Conviction, a game with no skill progression or variety at all, then you… Read more »

Brad, I think you are heaping too much praise on just one part of the game. You specifically say, besides the dialogue, that the roleplaying aspects are good. Yet you only cite the pistol and stealth parts. Are there not multiple other skill trees to progress? Are there not other ways to play? If I play an RPG, I want to have a customizable experience, I want to have a choice. If I could only play the game one way and it was an RPG, well that just does not cut it, that is not an RPG, and it is… Read more »

It’s funny how Obsidian’s games (even before they were Obsidian) all share the same qualities and problems: excellent writing and RPG elements (often the best in the industry), but poor, underdeveloped gameplay. Fallout 2 seems to be a minor exception, in that it had stronger gameplay than its predecessor, but it still had the same problem of skill imbalance and simplistic gameplay. Brad, based on your observations it appears that Alpha Protocol follows the old Fallout style formula of, essentially, “max out Small Guns and ignore most everthing else.” Planescape: Torment had similar problems: brilliant story, possibly the most brillant,… Read more »