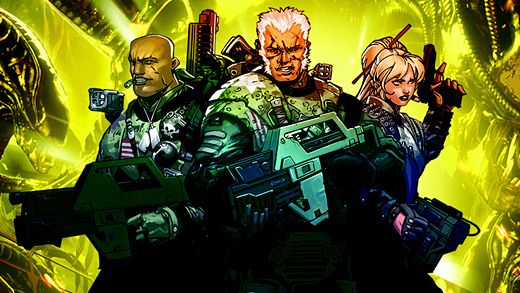 HIGH Cleaning out a hallway, unscathed, with grenades and pulse rifle.

LOW The pathetically weak Flamer should be a sub-weapon.

WTF Only missing two Marines? Where were they??

It's funny how certain film or book properties seem like they'd be natural fits as a video game, but it's been proven over the years that licensed properties are usually garbage. Despite appearances to the contrary, it's quite difficult to take a non-interactive property and make it a worthwhile interactive one.

Taking its own stab at this problematic conversion process, Aliens: Infestation

repurposes the xenomorphs and space soldiers from one of the most well-known sci-fi properties of all time and crams them into a 2D Metroidvania-style game on Nintendo's DS. It seems like an impossible task destined for failure, but I'm happy to report that the result is wildly successful, both as a faithful expansion of the property and as a title that's great all on its own.

Story-wise, Infestation is positioned as an "official" continuation of the events following Aliens. A squad of Colonial Marines are called to investigate the now-abandoned cargo ship made famous in the first movie, and soon after docking with the vessel… Well, anyone who's seen one the films can guess what comes next. Yes, the iconically slick, eyeless, double-jawed creatures have taken over, and it's up to the player to clean up the acidic mess.

The core gameplay of Infestation is mostly familiar and totally solid. Although the game follows the usual Metroidvania structure of presenting players with a large, non-linear area to explore with sections cordoned off until keys or devices are used to gain access, Infestation adds its own spin in two ways.

The first is the care and attention given towards making sure that the game has plenty of connections to the films. Anyone who's a fan will instantly recognize the signature sound effects, lines of dialogue and situations that pop up. I don't want to spoil anything, but Infestation is basically a love letter to Alien and Aliens, and it's clear that the developers have as much respect and affection for the property as the fans do.

The second twist is that the developers have infused a healthy dose of Survival Horror into the mix. It might not seem like the most natural combination on paper, but it fits as snugly as a chestburster behind a ribcage. 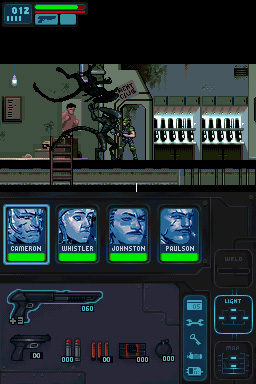 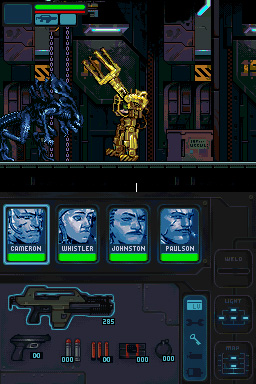 When beginning the game, the player has a squad of four Marines to choose from, although only one can be deployed at a time. The remaining three stay back at one of the many "safe rooms" scattered throughout. The active Marine must creep forward slowly through the hallways and rooms of the ship, constantly remaining on the alert for hidden aliens. With careful use of the motion sensor taken straight out of the movies (beep beep beep) it's possible to tell where attacks will come from, and plan accordingly.

If the aliens somehow get the best of whoever's on point, death is handled differently in Infestation than it is in other titles. Instead of having a number of "lives" or being reset to the last checkpoint, Marines are either killed outright or dragged back to the nearest alien nest. Captured grunts can be rescued if they're reached in time, but dead troops are permanently dead and the player must select the next point man from the reserves back at the safe room.

This unique take on character management gives the game a very tense, constantly-on-edge quality that's a perfect fit for the subject material. When Marines are gone for good (and yes, it will happen) others can be recruited from various nooks and crannies, but there are a finite amount. It is possible to run out of available backup troops, and a player could conceivably end up in a position where the game is unwinnable. It's a ballsy, bold choice and one that I found incredibly refreshing—after all, if there's nothing at stake, there's no thrill of victory.

While there's no doubt the game's a winner, there are a few things that the devs didn't quite nail. For example, the Flamer (a primary weapon) is required to burn through certain doors, but it's an incredibly weak weapon. Equipping it is practically a death sentence. It was also irritating to find that after marking each new Marine's location on the map for later retrieval, those markers were erased by leaving an area and coming back—very irritating. There are a few other issues that could have used polish besides those, but nothing significant or game-breaking.

As a lifelong fan of the Alien films and as someone who enjoys a good Metroidvania, I can't imagine Aliens: Infestation

turning out much better than it did—and really, the fact that it's good at all means that it's already beaten the odds to join a very select group of titles that survived the transition from books or film into videogame-dom. Fans of the genre would be smart to pick it up, and fans of Alien can consider it both a mega-dose of fanservice, and a must-play to be tracked down. Rating: 8.0 out of 10.


Disclosures: This game was obtained via retail store and reviewed on the DS. Approximately 6 hours of play were devoted to the single-player mode, and the game was completed. There are no multiplayer modes.

Parents: According to the ESRB, this game contains violence, blood, partial nudity and mild language. I really have no idea what the partial nudity refers to since I can't recall any suggestive content whatsoever, but the rest of the warnings are generally accurate. However, since the game is on the DS and the graphics are so small, there's really not a lot to be overly cautious of. I wouldn't give it to very small children, but I would imagine that most parents who let older kids watch sci-fi would find it fairly harmless.

Deaf & Hard of Hearing: You won't have any difficulties playing the game. All dialogue is delivered via text, and there are no essential auditory cues. While it's true that the motion detector function gives off an audio "PING!" sound when aliens are nearby, the same information is also displayed on the game's map visually. I played at least half of the game with the sound off, and had no problems at all.

the first vessel they dock with is the Sulacco, which is the Marine ship from ‘Aliens’. The freighter from the first film was the Nostromo.