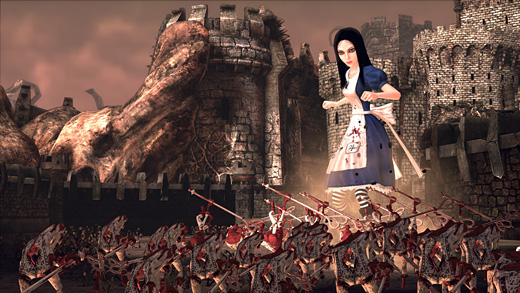 Just a quick one tonight, I've been working a lot of night shifts lately and it's catching up to me. Still, I hate delaying updates for more than a day or two, so hopefully this will tide you over…

Still playing Alice: Madness Returns, and progress has been slower than expected for two reasons.

The first is that the levels are long as hell and every section in the game could easily have been trimmed back by at least a third (if not more) and the game would not have suffered a bit for it.

The second reason is that I judged the content to be a little too intense for my kids, so I'm not playing it in front of them. Not having daytime hours available to play slows down the review process quite a bit, but hey, no one ever said being responsible is easy.

All that stuff aside, I do enjoy the title. The art direction is stellar and I have a great fondness for the character of Alice herself. The way the developers put her together was totally elegant, and she feels both approachably simple and pleasantly complex at the same time. The mood and tone of the game is spot-on as well, provided that you like dark, psychotic adventures.

It's not the knockout that it could have been thanks to bloated levels and a little too much emphasis on random doodad collection, but it's still a good time. Look for a full review in the near future. 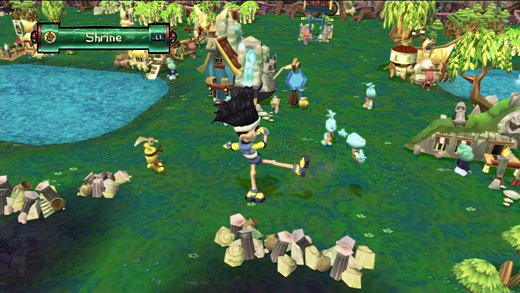 I tried Akimi Village on PSN today, or rather, I had my son put it through its paces while I watched and caught up on some important paperwork.

Being quite literal, the game is XBLA's A Kingdom for Keflings re-skinned with different graphics. This is essentially a good thing since the game is one of my favorite downloadables and it's a great fit for kids. With no violence and no penalty for making mistakes during gameplay, I'd be hard-pressed to come up with something that's friendlier for little ones to get into. The downside? Players looking for something a little different will be disappointed.

Those who've had their fill of the two downloadable titles similar to this one on Microsoft's service will have little reason to check it out, but if you want more parent-approved town-building or have never played the Keflings games in the first place, then it comes with a strong recommendation to people who don't need to shoot aliens in the head to have a good time.