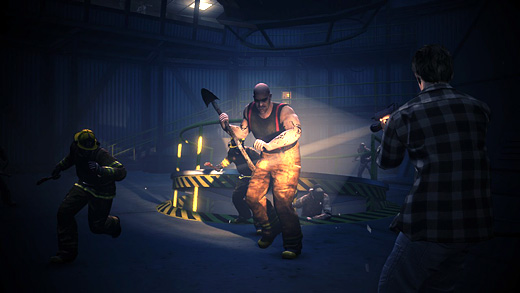 LOW A hard-locked 360 and stuttering framerates in the second cycle.

If there's an IP out there with more untapped potential than Alan Wake, I really don't know what it is. All the elements for greatness seem to be in place, yet things never come together. I mean, it seems to me that taking a writer with the power to change reality itself and putting him up against a dark force trying to distort the world should result in something more than a run-and-gun. Granted, Wake does run-and-gun pretty well, but still… shouldn't the goal for this franchise be set just a little higher?

My own hopes for the series aside, returning fans should know that it's not exactly clear what Alan Wake's American Nightmare

is—it's not an add-on to the main game since the story doesn't pick up where the last DLC left off (nor is the original disc required to play) and it's certainly not Alan Wake 2 since the game's scope is quite small and doesn't offer a lot of forward momentum. If anything, it's best described as a vaguely-related side story. I also wonder how players who didn't catch Alan's first adventure will react to this new entry, although it's questionable how many newcomers would jump on without trying the original campaign first…

Regardless of how it fits together with the other Wake bits, Nightmare takes the titular "champion of light" (groan) and places him in a story that repeats itself over and over, much like the film Groundhog Day. However, there's not a lot of brain power required to solve this conundrum. Wake will go through three environments three times each, emerging victorious after collecting a few items and shooting a whole mess of Alan's enemies, the shadowy Taken. It's simple action, no introspection needed.

In contrast to his previous outings, Nightmare's Motel, Observatory and Drive-In locations are designed to be open-ish, and players can wander most of the landscape as they see fit. It's a nice change of pace from the first game's repetitive forest funnels, and it encourages exploration. There might not be a whole lot to find, but it gives the game a different feel, which I appreciated.

While I usually detest repetition of any sort, I was also a fan of the "stuck in a time loop" concept, much to my surprise. I think it's because Wake is the sort of series that can easily support surreal hallucinations and impossible, abstract ideas breaking reality without causing the player to blink twice. In fact, I wish the developers would do it more often. In this case, I especially enjoyed seeing how conversations changed with the three NPCs in the adventure; they retained memories of Alan's previous visits, even though each time through was supposed to be "the first." 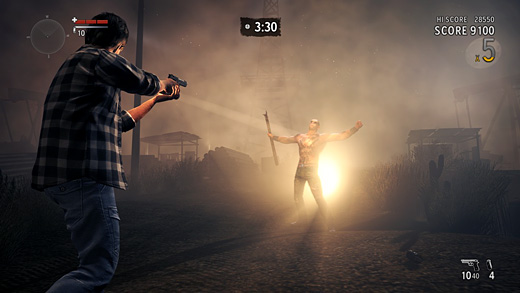 It was also clever (and greatly appreciated) that the developers tweaked each scenario slightly to make sure that they didn't play the same way each time through. I was curious enough to want to see how each scene changed, although I will say that I'm glad Nightmare was on the short side—if it was any longer, it would have been overkill. As it stands, each successive run is a bit shorter than the last thanks to objectives changing or being removed altogether. It's relatively painless, and surprisingly, never drags.

The combat itself also contributes to this painless, flows-right-along feeling. Alan has access to an armory's worth of shotguns and assault rifles. Ammo, grenades, batteries and flares are never in short supply. Alan's flashlight (used to weaken the Taken before finishing them off with bullets) recharges much faster than it previously did, as well. This higher offensive capability goes hand-in-hand with the fact that the Taken attack in smaller numbers and pull off fewer back-attacks. Alan's a killing machine with little to fear (please note: this is not a complaint) so that while the game is mostly based on shooting, it never becomes tiresome, or a chore.

I must admit it's no surprise that Nightmare's combat is satisfying enough given that the developers are the same people behind Max Payne, but I still can't help but feel the Wake games would be better if the conceptual elements were put to better use. The high point of the series came with The Writer DLC's ephemeral, changing landscape and using actual words to interact with the environment. Nightmare pays only the most cursory lipservice to the premise by again including script pages as pickups (yawn!) and letting Alan "alter reality" by collecting a few items and putting them in the right place. I almost think the series would've been better off if the devs had dropped the idea of Alan being a writer altogether and had made him an everyman instead. Why bother with the conceit if it's hardly ever used?

Once the campaign is complete, players wanting more will find a good chunk of action in the Arcade mode. With no connection to the story in the campaign, Alan finds himself in a series of areas and must survive waves of enemies until sunrise. This mode highlights the content's solid gunplay and comes off as surprisingly intense thanks to larger numbers of attackers, reduced access to guns and ammo, and the need to stay on the move. It wasn't my personal cup of tea, but it was well done and certainly increases the value and playtime of the purchase.

While it doesn't achieve much with the plot or its core concept, Alan Wake's American Nightmare

offers an interesting-enough time-loop scenario with satisfying combat, and it knows when to end before it wears out its welcome. I definitely enjoyed my time with the game in a tactile sense, but I could never get over the nagging feeling that the series still has quite a way to go before reaching its full potential. Rating: 7.0 out of 10.


Disclosures: This game was obtained via publisher and reviewed on the Xbox 360. Approximately 4.5 hours of play were devoted to the single-player mode, and the game was completed. There are no multiplayer modes.

Parents: According to the ESRB, this game contains blood, suggestive themes and violence. The suggestive themes are limited to conversations with a semi-possessed woman in the third area. She says some racy things, but there is no nudity or actual sex. Violence in this game consists of the main character blasting shadowy people and creatures with all sorts of firearms. It's not the goriest thing I've ever seen, but it certainly ranks high enough on the "graphic" scale to be the sort of content that no children should be playing. Grown-ups only.

Deaf & Hard of Hearing: You should be aware that the game uses audio cues to signal the arrival of enemies and the "all clear" when attackers are wiped out. There are usually visual cues to accompany enemies arriving and to announce when the coast is clear, but not always. Hearing-impaired gamers might notice themselves having to work a little bit harder, but it's still very playable.

Brad, overall I agree with your review. I realize this IP has much untapped potential, but I still had so much fun with this, the first game and the two DLC’s. I can’t even explain it, because any way you look at it, the gameplay is extremely repetitive. And I still love it! For me, the story is enough to keep me hooked. Remedy must be doing something right for me to keep coming back to a series that has a turd for a main character. Anyway, I did have one brief instance in the 2nd cycle where I felt… Read more »