Yes, I Can Hear You Now. Why didn't You Speak up Earlier? 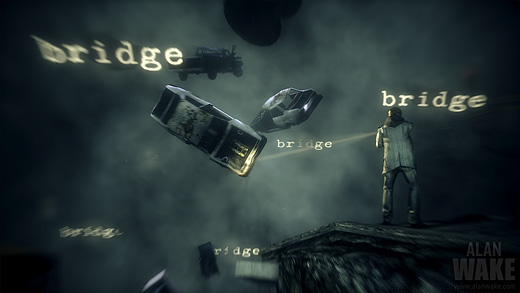 HIGH Increased use of the game's psychological elements.

LOW The combat is infuriatingly cheap and unbalanced.

WTF The Signal's product placement for Verizon is unbelievably blunt.

If you read my review of Alan Wake, then you know I wasn't a huge fan. While the premise offered much potential, it was disappointing to see the developers stick to a repetitive run-and-gun formula while refusing to capitalize on the things that made the title unique; things like the main character being a writer, or how the adventure had to do with a "dark place" and its ability to alter reality.

To call Alan Wake a missed opportunity is putting it mildly.

Much to my surprise, the developers have done an about-face in the postgame DLCs, both The Signal and The Writer. While neither is perfect by a long shot, I felt as though they both captured and built on elements I enjoyed in the campaign. On the other hand, the combat is still so miserable (especially in The Signal) that it's difficult to wholeheartedly recommend either.

Without spoiling the content (and really, there's not much to spoil) the add-ons take place in sequence directly after the campaign's end, and neither delivers any post-game revelations. While the status quo for Alan stabilizes a bit, those looking for a substantial "what happens next?" resolution won't get it. However, what they will get is a double dose of what should have been in the game in the first place—psychological head trips inside Alan's mind.

Both Signal and Writer feature the kind of surreal, fanciful, and deceptive level design that was only vaguely hinted at before. This time around, doors don't lead where the player expects them to, familiar sites become strange and foreign, and the world as Alan sees it is broken up into jumbled bits of memory and impression. As far as I'm concerned, both of these DLCs offer better (and far more interesting) environments to explore than any that were seen in the main game. 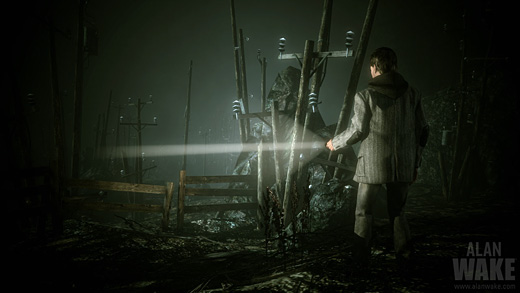 This tantalizingly disconcerting work is further supported by the developers re-establishing the relationship to Alan's novelist persona. The old (and totally ineffective) mechanic of picking up lost novel pages is given a quick nod and then shoved aside in favor of planting actual words in each level. As Alan journeys along, he often comes across seemingly incongruous bits of prose—nouns literally floating in the air. Snippets like "BOOM", "TOOLS" or "BRIDGE" litter the landscape. When Alan shines his light on them, the concepts are transformed into what they describe. (An explosion, ammo, and a wooden platform, respectively.)

This trick was previously seen only briefly at the end of the campaign, but I'm quite glad it gets major play this time around. It's a perfect fit for the game, not only as a way of acknowledging the literary connection, but also as a very clear manifestation of the fluid otherworld Alan finds himself trapped in. Whatever he imagines can become reality, and this was a concrete translation of that theme.

Something I also found positive was that there's much more time given to Alan's internal thought processes, from both himself and from figments of his imagination that have no problem voicing the things that Alan knows, but can't admit. While I still don't care much for Alan as a character (he's a complete ass, really) I felt as though I finally got the kind of internal dialogue that this project had been screaming out for.

While I was surprised at my appreciation for the themes and level design in The Signal and The Writer, I had no appreciation whatsoever for the combat. For some reason, the developers display a sickening fetish for back-attacks and enemies that seem to pop out of nowhere. There are a few tense setpieces that impress in The Writer, but the general unpleasantness of encounters is especially bad in The Signal—I found myself dying at least once or twice every time enemies appeared. Unfortunately, this wasn't the kind of difficulty that made me want to get strategic and rise to the challenge; it just made me hate the low-blow enemy placement. I soon learned to run away from as many ambushes as I possibly could, and I would recommend the same to anyone else.

After playing through both The Signal and The Writer, the biggest impression I'm left with is that these two chunks of game (hateful combat aside) are better than anything that came on Alan Wake's retail disc. They illustrate Alan as a character, they immerse him in a world of his own internal madness, and they play to the strength of the premise in a way that actually makes sense. I can honestly say that if these levels had been included in the main campaign, my overall evaluation would've been significantly higher.

…The question now is, did the developers come to this shift in design after seeing negative feedback from Alan Wake's release, or were these best bits of the adventure intentionally held back from the start? Ratings: The Signal 5.0 out of 10; The Writer – 8.0 out of 10.

Parents: According to the ESRB, this game contains blood, language, use of tobacco and/or alcohol, and violence. To be honest, I'm a little surprised that this game only rates a "T." There's tons of shooting possessed humans, and plenty of creepy weird things that would likely freak out younger players. It may not be excruciatingly graphic, but between the combat and the other elements, there is no way I would let children near the game. For older players only.

Deaf & Hard of Hearing: You should be aware that the game uses audio cues to signal the arrival of enemies and the "all clear" when attackers are wiped out. There is usually a visual cue to accompany enemies arriving, but very rarely when the coast is clear. Players who have hearing issues may find themselves spending extra time searching for enemies who aren't there anymore. There were other instances when hearing would be beneficial to other particular situations, so hearing-impaired gamers might notice themselves having to work a little bit harder.

On Nightmare Mode the fighting is difficult and there are many times when you have to just “run for it” instead of even attempting to take on enemies (you’ll just waste ammo or be overwhelmed)…but anything less than that is very intuitive and balanced…sounds like you just don’t know how to play an action game like this. That said, the main game is far, far better than the DLCs. The DLCs don’t add much to the story and really just recycle elements from the main game (there’s is virtually nothing new in either one). But since the first DLC is… Read more »

To be honest, it sounds like you really suck at Alan Wake, Brad. Back attacks should be relatively easy to avoid, given that enemies telegraph their presence with little slow motion cinematics and you just tap a button to dodge. I sort of agree with you in a way though – I don’t think the combat is frustrating the way you do (I beat The Signal without dying on my second run with very little problem – maybe you just need to know when to run?) but I still think it’s by far the weak point of the game. I… Read more »