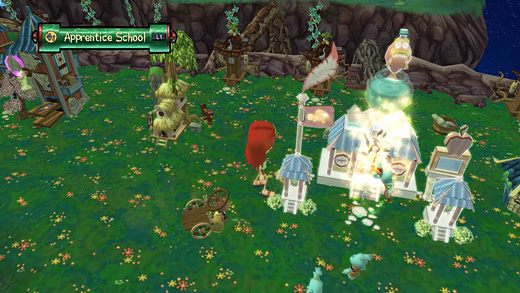 LOW Might be too similar and unpolished for those familiar with Keflings.

WTF There's still no "everybody stop everything right now" function?

Games that are both appropriate for children and interesting for adults are few and far between. As a parent, the scarcity of such titles is both depressing and frustrating. However, there are a few out there that fit the bill. Two such games are the pleasantly welcoming A Kingdom for Keflings, and its sequel, A World of Keflings.

Featuring non-violent, constructive play enjoyable to large and small hands, both became quite popular with gameplaying families. They're great… but they're only on Xbox Live. Due to their exclusive nature, those without access to a 360 have never had the chance to see what NinjaBee's been providing. Thankfully, PSN's Akimi Village

provides a taste of what they've been missing out on. (Sorry, Wii owners.)

Village begins by dropping the player's avatar into a land of little greenish people—the titular Akimi. The area's only other notable resident is an odd raccoon guru who seems to know more than he's saying. With little information to go on, it falls to the player to harvest natural resources (bamboo, wood, stone, and spirit) and use them to build structures which will eventually help free the mysterious land from a strange darkness that covers most of its surface.

Avoiding the usual interface problems that crop up with RTS-style console efforts, the player starts by physically picking up an Akimi and taking them directly to what is to be collected. After the Akimi gets the order, then the player takes them to where the resource should be dropped off (a tree mill, a rock carver, and so on.) At this point, the player is free to direct her attention elsewhere as the little person will continue to shuttle back and forth accumulating raw materials until new orders are given. These materials are used to make buildings, and these buildings unlock more buildings until the end of the game is reached hours later.

The formula is extremely straightforward and easy to grasp, and technically speaking, Akimi Village is almost exactly the same game as both of the Keflings titles. All three use the "little people" of the land as labor to accumulate resources. All three feature a string of ever-more-complicated buildings to construct with those resources, and all three feature penalty-free gameplay that allows for a nearly infinite number of mistakes without causing players to get stuck or restart. However, while the games are similar in large part, there are some differences. 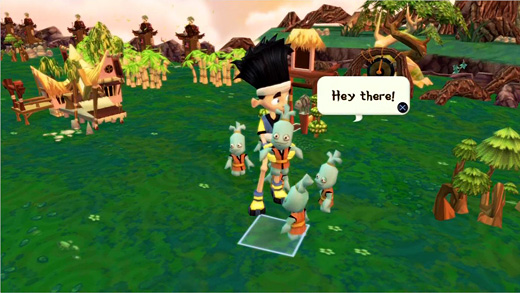 The first thing Keflings players will notice is the shift in artistic style. Akimi breaks away from quasi-European flavor in favor of a generic, stereotypical Asian motif with loads of waterfalls and bonsai trees. The two selectable avatars the player must choose from at the start are both ugly, occupying an uncomfortable middle ground between West and East. The buildings the player puts together are very busy visually, and can be difficult to discern between with just a glance. While I wouldn't go so far as to say that it's painful on the eyes, for me, personally, Keflings has a stronger, more appealing visual presence.

In terms of game design, Akimi Village is interesting in that it seems to fall squarely between A Kingdom for Keflings and A World of Keflings. It's more advanced than the former and sports a couple of interesting new features, yet it lacks many of the amenities offered by the latter.

One new twist I enjoyed was the addition of "rubbish piles" which can be cleared away in order to remove darkness from the land. The feeling of reclaiming usable territory was a satisfying one, and I looked forward to seeing what would be uncovered when my work was done. Another addition was a new type of building with an area-of-effect that enhanced the speed of nearby workers. On the other hand, Akimi lacks player-friendly tweaks such as the ability to move buildings once they're built in order to maximize land-use efficiency, and the incredibly helpful sidekicks in World are curiously absent as well. Without special assistants to help out, the player will find themselves doing a little more repetitive grunt work than might be desired.

Another thing I noticed as someone familiar with all three games is that Akimi doesn't have quite the same easy-going flow as World.

For example, I found myself encountering little unpolished areas that made the experience hiccup— things like not being told a certain building must border water, or getting stuck for a few minutes when I didn't realize that the next building on my list was actually an addition to something that already existed. There is a sort of "taking shortcuts" feeling to the game that's hard to ignore when things like this aren't made clearer, despite the fact that there are no major issues with play.

Those niggles aside, I do want to praise Akimi Village

and NinjaBee for again delivering a game without any negative dynamics to contend with: no enemies to defend against, no hurricanes or earthquakes to ruin urban development, and no penalties of any sort. While it may seem somewhat boring to imagine a game with no "struggle," it's this very quality that makes it such a great title for children and a (potentially) relaxing one for adults. Games in general suffer no shortage of aliens, guns or bloodthirsty monsters, but titles that remove the element of danger while encouraging fearless experimentation are in short supply. Rating: 6.5 out of 10.


Disclosures: This game was obtained via publisher and reviewed on the PS3. Approximately 4 hours of play were devoted to the single-player mode, and the game was not completed. No time was spent in multiplayer modes.

Parents: According to the ESRB, this game contains mild cartoon violence. Nothing to be afraid of here, moms and dads—There's no combat, no blood, no language, no sexual situations, and no violence.  The content is suitable for even the youngest kids.

Deaf & Hard of Hearing: There shouldn't be any problems. There is no spoken dialogue, and all information is presented through text on-screen. No audio cues are necessary for gameplay whatsoever. It's totally accessible.