Less interesting than it sounds 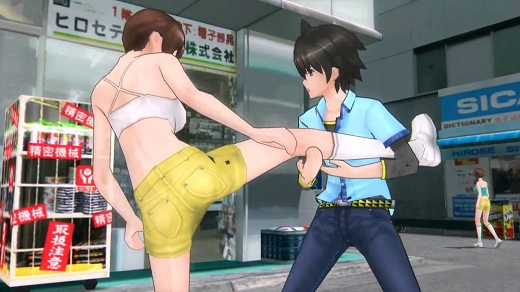 WTF How did something with so much promise end up so dull?

The premise of Akiba's Trip from Acquire, even by my standards, is pretty out there. At its core, the hero's mission is to run around Japan's famous Akihabara district while stripping enemy vampires of their clothing in broad daylight, thus reducing them to ash.

When I first heard about it, I thought it sounded so outrageous, crazy and risqué that it would never have a chance of coming to America, yet XSeed took a risk and here it is. Unfortunately for all involved, the game doesn't deliver on its bizarre potential. Against all odds, a game about ripping clothes off of vampires somehow ended up boring.

Things don't start well. The intro is loaded with an excessive amount of dialogue that carries no impact and does nothing for characterization. It's obvious from the amount of talking that the writers love to write, but I found myself skipping through the dialogue after just a few minutes, instantly losing patience for the weightless, tedious chatter. The rest of the game follows along the same lines, constantly cribbing from The School of Generic Anime Writing.

Without being drawn into the story, it then falls to the gameplay to deliver excitement in Akiba's Trip. Sadly, it doesn't get the job done.

Soon after beginning, the player is let loose to explore Akihabara. The experience of wandering from place to place is somewhat reminiscent of Sega's Yakuza titles, only simpler, and more colorful. The player can go here and there, entering shops and occasionally talking to people. It's all well and good to roam the city, but it doesn't add substance. The graphics are basic, and as someone who has never been to Akihabara in real life, I have no idea whether this is a faithful rendition or not. Even if it was, simply being in this environment doesn't enhance the lifeless, repetitive gameplay.

After starting one of many generic missions, the hero (who must be a male in the first playthrough) will go to a location and inevitably start fighting fully-clothed vampires. The combat system asks the player to strike between high (head), medium (chest), and low (leg) zones, and when an enemy has taken enough damage, the garment in that zone starts flashing. At this point, the player can hold a button to rip off the damaged items. Once a vampire has been stripped of all three levels, they disintegrate.

As stated earlier, the concept is an interesting one… It seems as though the game should be rife with all sorts of titillating content, or at least find humor in its tasks, yet neither slant pans out. While I applaud Acquire for providing just as many male vamps as females (sorry guys, this is hardly a pure T&A show) it's just straight-faced and dull. The combat is simple and doesn't evolve much, and the battles boil down to buttonmashing against a horde of enemies alongside an AI partner.

Getting into these fights was interesting for a while and performing multi-character strip-combos was a laugh the first time I did one, but there's just not enough going on here. The quests are dull, and the equippable clothing and weapons don't add much to the combat.

Even from a pure sex-appeal angle, Akiba's Trip just can't bring the heat. I honestly expected wall-to-wall skin, but the game actually comes off as fairly modest. Apart from seeing both men and women in their underwear, things rarely get raunchier than that.

Huge fans of Japan or Japanese games might find more to appreciate in this Akihabara-centered experience than I did, but as someone who looking for a quirky story or interesting combat, I came away feeling quite unsatisfied. The way I see it, if a game is going to base itself on a premise like this one, go big or go home. Instead of the burlesque comedy show one might reasonably expect, Akiba's Trip is a peck on the cheek and a stale knock-knock joke. Rating: 5 out of 10.


Disclosures: This game was obtained via publisher and reviewed on the Vita. Approximately 6 hours of play were devoted to the single-player mode, and the game was not completed. There are no multiplayer modes.

Parents: According to the ESRB, this game contains: sexual themes, strong language, and violence. It's not nearly as spicy as one might think. Characters are stripped to their skivvies, but it all comes off as fairly harmless and dull. It's like a day at the beach with punching thrown in.

Deaf & Hard of Hearing: No issues here. All dialogue is subtitled, and there are no audio cues necessary for gameplay. Fully accessible.

played this the other day, while I’m a fan of this type of game i agree with you and can say that this fails to hit the mark, the combat is actually horrible. Mirko