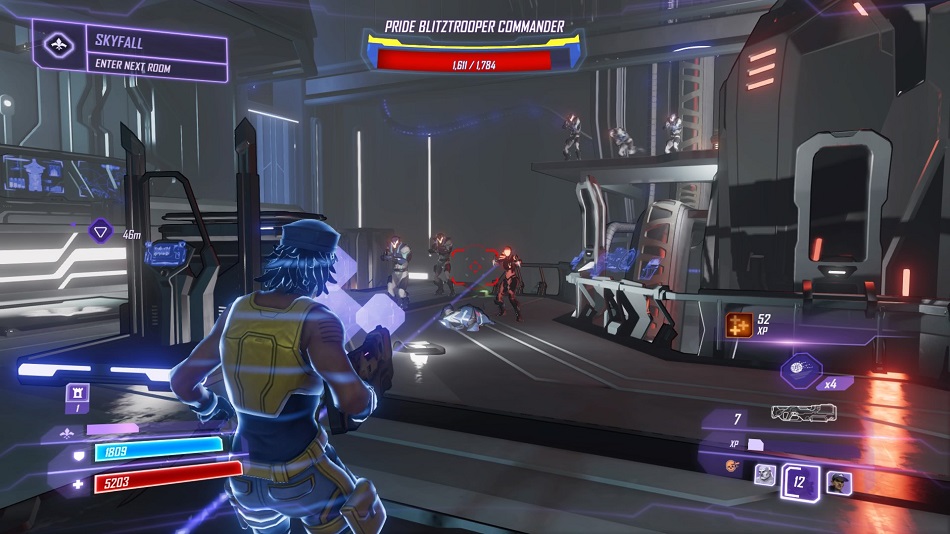 HIGH The cast is incredibly diverse.

LOW The reliance on ‘go here and kill these guys’ missions.

WTF This came from the team that made Saints Row 4??

Are you interested in some boilerplate open-world action? Would you like to shoot generic enemies in gray hallways and drive around a bland, indistinct city?  Are you a fan of Saints Row, but felt like it was way too clever? Well, Agents of Mayhem is the game for you!

I’m gonna keep it simple – this game is awful, and only a rough sketch of what the final product should be. A bog-standard open world structure is in place, but there’s nothing to make it pop. There’s no spark, no life. What’s offered is a lot of samey tasks and boxes to check off, but certainly no reason to do so. Agents is a failure on every level.

The character designs feel generic, and when they’re not generic, they feel lifted out of Overwatch, of all things. One character has a freeze ray, one has dual pistols and zips around, one has a harpoon/shotgun combo… The inspiration isn’t hard to see. While I do give the game props for having a racially diversified cast (which is great!) they’re just so dull. I also miss the option to customize my own character as well… Volition were always some of the best when it came to making crazy avatars, and that is sorely missed here. 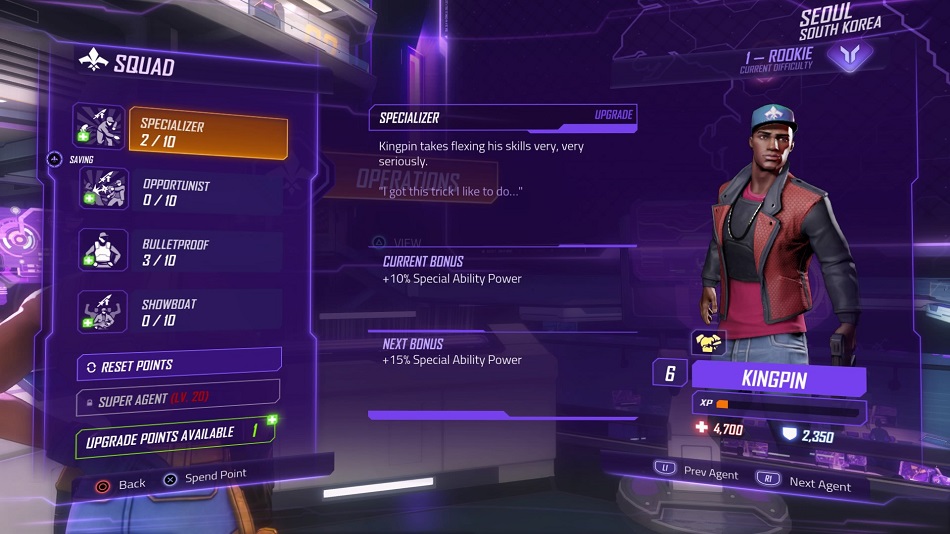 The setting is a futuristic Seoul, but everything’s grey buildings with a bit of neon. It all looks the same, and if not for the guide markers popping up on the road, I’d never be able to tell where I was supposed to go. I also never want to go into another enemy lair again – they’re nothing but lookalike grey rooms and hallways with a few glowy machines peppered in. It’s irritating to find that that there’s no good way to scale vertical spaces and objectives are often in high places, and the game commits the sin of making the player travel to a far-away place just to make them go there. Traversal for its own sake is not a quality I look for in games, and haven’t since 2004.

The missions are a remedial course in the most basic open world design – the majority ask the player to go to a location and kill some goons, then travel to another location to push a button and kill more goons, followed by going to yet another location and doing it again. No surprise, it gets old, fast. Having one or two of these wouldn’t be a big deal but mission after mission followed this same structure, and it’s never clever or entertaining.

The script is a non-starter, featuring instantly-forgettable bad guys and a lot of flat dialogue. I didn’t think I laughed or even chuckled once during my time with the game, and for developers known for having a strong sense of comedy in their work, this is not a good sign. I also noticed multiple glitches and oddities on a technical level as well. Sometimes mission markers would not appear, leaving me with no idea what to do or where to go, and sometimes there would be extended delays in voice clips playing, making conversations feel bizarrely disjointed.

While I can’t imagine how any developer could have followed up the balls-to-the-wall tour-de-force that was Saints Row 4, Agents of Mayhem feels like it isn’t even trying – it’s a tiresome, atavistic throwback that feels at least a decade out of date. It qualifies as An Open World Game on the most basic level possible, but has none of the charm, audacity, or OMG did that really happen? appeal that put Volition on the map. What happened here? Rating: 4 out of 10

Disclosures: This game is developed by Volition and published by Deep Silver. It is currently available on PS4, XBO and PC. This copy of the game was obtained via publisher and reviewed on the PS4. Approximately 8 hours of play were devoted to the single-player mode, and the game was not completed. There are no multiplayer modes.

Parents: According to the ESRB, this game is rated M and contains Blood, Drug Reference, Sexual Themes, Strong Language, and Violence. The ratings board says this is an open-world third-person shooter in which players assume the role of elite agents fighting a terrorist group in a futuristic Seoul. Players complete mission objectives and use machine guns, shotguns, pistols, and explosives to kill enemy minions and bosses. Combat is frenetic and accompanied by realistic gunfire and large explosions; enemies frequently emit splashes of blood when hit. Players can also shoot and kill civilians during game play, though these actions are not rewarded. The game contains some sexual material: an animated video clip parodying a pornography scene (sexual acts are not depicted). One scene depicts packets of drugs covering a character’s breasts; drugs are also mentioned in the dialogue (e.g., “…selling recreational narcotics” and “…[T]he way this has been powdered, bundled definitely Yakuza”). The words “f**k,” “sh*t,” and “a*shole” are heard in the game.

Deaf & Hard of Hearing Gamers: Conversations and dialogue are subtitled, and there are no significant auditory cues. It’s a dull game, but it’s fully accessible.