Having been a fan of Planet Moon's previous work (conceptually, anyway), I was quite disappointed to see that none of their trademark absurdist sense of humor made it into After Burner. I suppose it wouldn't be a good fit for a game aiming to be a straightforward Top Gun sort of thing, but it would have added some life to a product whose biggest failing is repetition and lack of excitement.

Feeling like an on-rails shooter more than a fly-anywhere project like Namco's Ace Combat, the selected aircraft (there are several to choose from) shoots straight ahead like a rocket while the scenery goes whizzing by. Very little steering is involved. In truth, this aspect of the design is quite faithful to the source material, and I don't fault it for that—it's actually somewhat charming in a retro sort of way.

Although there's only so much you can do with flight combat, After Burner's main issue is that the formula for the entire game, start to finish, is completely revealed by level two; when ground targets are locked-on, hit circle. When air targets are locked on, hit square. Each level features two refueling stops, and one major ground target that blows up in a brief cut-scene. Repeat said pattern until credits roll.

If the formula had been broken up and had different types of levels and objectives (preferably much shorter ones) it would have been good enough to keep me busy with a few days of mindless shooting. Sadly, the action becomes so stale, so fast that all excitement rushes out like air escaping from the flatulent end of an untied balloon.

Apart from the Xeroxed missions, pilot selection was another whiffed opportunity. There are three throttle jockeys available before starting the main campaign, each with their own "flying style" and level requirements. (One leans towards fast completion times, another tries to rack up the most collateral damage, et cetera.) The problem was that once one was selected there was no way to change if I wanted to try a different one. Are players really expected to start a new game just to try each pilot when the action's this static? 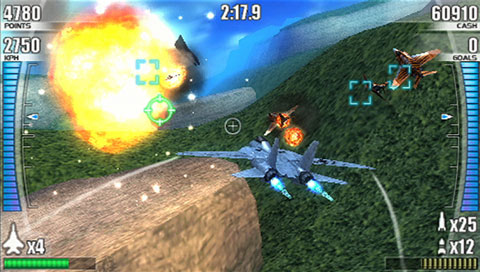 Though I appreciated the surprisingly plentiful aircraft customization options like crazy paint jobs and extra wings, that aspect was a small spark amidst a whole lot of fizzle—and anyway, saying the best part of the experience was adding a fat set of exhaust pipes to my stealth fighter amounts to small praise, indeed.

After Burner may be spiritually true to Sega's seminal 1987 hit, but game design has progressed by leaps and bounds since then. Cleaving so closely to its dusty, outdated forefather hurt more than it helped, I'd say. Rating: 4.5 out of 10.

Do i like games at all? no, not really.. i mean, i just spent the last 24 years playing and almost 9 years reviewing because i didn’t have much else to do. am i a tough critic? absolutely. i believe in using all the numbers from 1-10, and i only give good scores to games that really earn them. want to see some games that i did like? go into the reviews archive and you’ll see that i think there are a lot better things to spend money on than FF7CC and Black Falcon. oh, and to answer your question,… Read more »

Tut tut Brad, at it again i see. First FF7CC now ABBF. Can i ask you, do you like games at all? Maybe we should scale down your rating system… say let you think your rating over 10 but we just put it over 5. so 4.5 out of 5 lol. Anyway its your opinion and i respect it. My Rating is about 65-70/100 i’d say, it was pretty enjoying while it lasted, 4-5 days play. But true once you complete you wouldnt play it through again with another pilot. If you do later on you would NEVER play it… Read more »