According to ESRB, this game contains: Mild Language, Mild Suggestive Themes, Violence, and Use of Tobacco 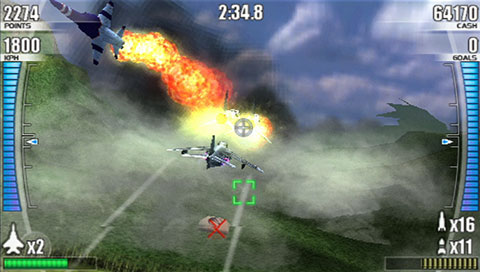 Parents shouldn't be concerned. Although I only completed one character's story arc out of a possible three, the content I saw didn't lead me to have any concerns. Sticking strictly to average action movie content, I didn't see anything risqué or strongly suggestive in the cut-scenes. The actual gameplay segments are totally harmless; airplanes shooting other airplanes or ground targets has very little potential to corrupt America's youth.

Flight game fans may want to check it out simply because there aren't that many options on the PSP, but be aware that repetition runs thick in this title and the final stage plays just like the first one. If you're OK with one-note game design through beginning, middle, and end, it's simplistic fun for an hour or two. If you need something long-term, look elsewhere.

Deaf and Hard of Hearing gamers shouldn't have any concerns. Dialogue during cut-scenes is subtitled, and there are no significant auditory cues during gameplay. The action is extremely fast, but also extremely visual. Everything you need to know is presented on-screen.