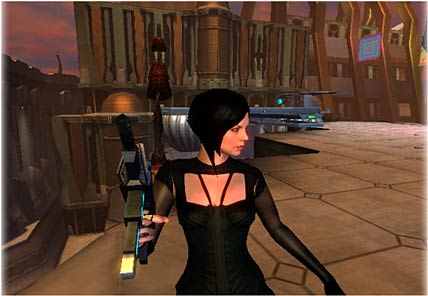 Stylish and stylized, Aeon Flux is one of the more unusual additions to the Basement since it's an extremely rare animal—a licensed game that succeeds thanks to developers who took the time to understand their subject before crafting a gameplay experience that's the perfect interactive extension of the characters and world it's based on.

I've never seen the film starring Charlize Theron, but I'm intimately familiar with the series of animated shorts that served as its inspiration. Peter Chung's work for MTV's Liquid Television starred a leather-clad super-agent in a dystopian, confused future. True to the original series, the game is broken up into surreal, non-linear episodes which don't have plot continuity. It might be disconcerting for people who aren't familiar with Aeon to see her die at the end of nearly every chapter, but it was immensely satisfying to see the developers zero in on the enigmatic, ambiguous qualities that made Chung's work so memorable.

Being quite satisfied with the intellectual content, I was extremely surprised to see the game mechanics were an equal match. Like an impossibly agile spider, Aeon Flux clings to walls, performs stunning acrobatics and threads up and down dizzying heights on a spy-wire. This physicality was one of the hallmarks of the TV series, and it's perfectly translated here. Like a harsher Prince of Persia or a more ruthless Lara Croft, Aeon skirts danger and cuts through the superb environments like a glinting black blade. Sailing up and down, and leaping in way that could almost qualify as flight, half the entertainment to be had is from putting Aeon through her paces and effortlessly defying gravity.

Although the animation and framerate aren't as optimized as they could be (one of the qualities common to Terminal Reality's other titles) and some of the combat sequences can occasionally be frustrating, looking past Charlize Theron's digitized face reveals Aeon Flux to be finely in tune with its animated soul—and a darker, more artistically challenging thrill ride than players are usually privy to. Rating: 8 out of 10

Disclaimer: This review is based on the Microsoft Xbox version.

Bitcoin is an amazing deposit method at online casinos. Read more in this article .