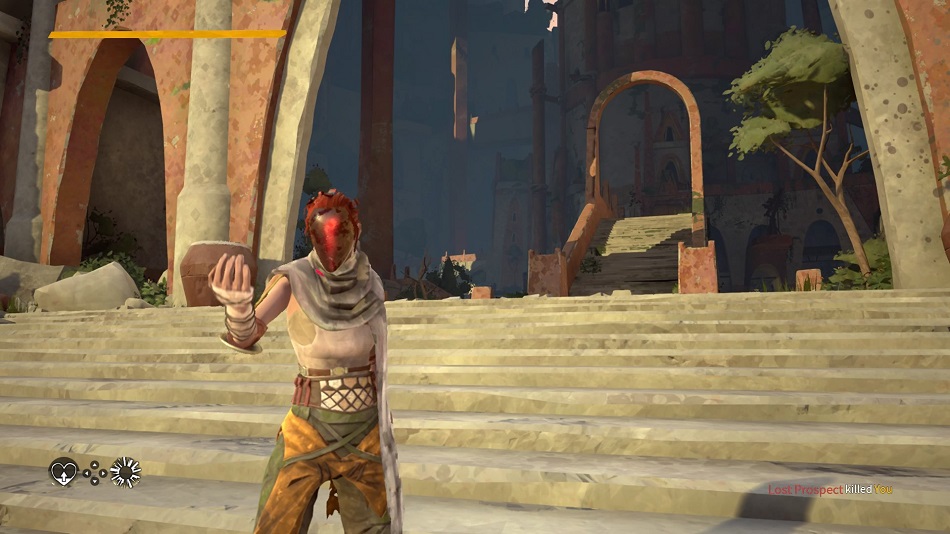 High The aesthetics are awesome.

Low Getting gangbanged five-on-one during the first hour of gameplay.

WTF For an online-focused game, how are the servers this poor?

Occasionally at GameCritics, we’ll do a main review and then a second opinion.  However, with Absolver, we had two critics playing the same game at the same time. Both Brad Gallaway and Mike Suskie had similar takes, so we’ve combined their views into one piece.

Brad: If you ask me, it takes a lot more than good ideas to make a good game, as Absolver shows. This new title developed by French studio Sloclap and published by Devolver Digital sports more than a few flashes of inspiration, but the package fails to come together in a compelling way.

Things start with minimalist storytelling — the player is in some sort of monastery, and they’re chosen to don a magical mask which transports them to another world where they fight others hand-to-hand. Martial arts as penance, perhaps? There’s not much given but it’s still a great premise.

Unfortunately, the adventure stumbles immediately after the intro thanks to too much information being withheld from the player — among other aspects of Absolver, this is a design decision that seems cribbed from Dark Souls, to its detriment. Basic things are kept back, such as finding out that attacking after using a health spell will multiply the healing effect, or that unlocking a new move is done by being struck (or defending) against it and then defeating the opponent who uses it.

Mike: Another reason Absolver feels overwhelming to dive into is that the combat comes across as off-puttingly technical. Players tweak their fighting styles by creating “combat decks” consisting of custom combos, where each move ends with a player facing a different direction, that direction then dictates what the next move will be, and so on.

It sounds complicated, but as Brad pointed out to me, all I really needed to worry about was putting together a light combo and a heavy combo. Stressing over the specifics isn’t worth it, especially since it takes far longer to unlock a decent supply of new moves than it takes to actually finish the game.

While Absolver is clearly modeled after the Souls games as Brad said, a big differentiating factor are its online features. Interactions with other humans in FromSoft’s work was usually a passive affair, but when Absolver is taken online, additional players are constantly wandering about, either aiding against enemy hordes or engaging in duels.

It’s a neat idea, but at the time of this writing, Absolver’s abysmal server performance has utterly broken the online functionality. The lag is atrocious — the first time I walked into the harbor district, I was unceremoniously flung into a body of water and instantly killed, apropos of nothing. Obviously, engaging in decent battles under such circumstances is a fool’s errand.

These issues go away when Absolver is played offline, but then it becomes bland and repetitive, mainly due to the fact that all the enemies (including the bosses) are humans who fight in the same relative manner. It’s the online-only features and interactions with other players that spice this thing up — without them it’s just dull, but it’s currently only playable when not connected.

In addition to the lag, it’s problematic that since martial arts are Absolver’s big draw, the combat never felt gratifying to me, even after I’d gotten good with it. Hitboxes feel inconsistent, it’s frequently difficult to judge how far an attack will reach, it’s hard to read moves clearly enough to be able to block or counter, and pulling off defensive maneuvers with the right analog stick is awkward as hell. Absolver also has perhaps the most useless dodge function of any game I’ve ever played. The poor performance on PS4 also undermines a combat engine that’s so much about precision. 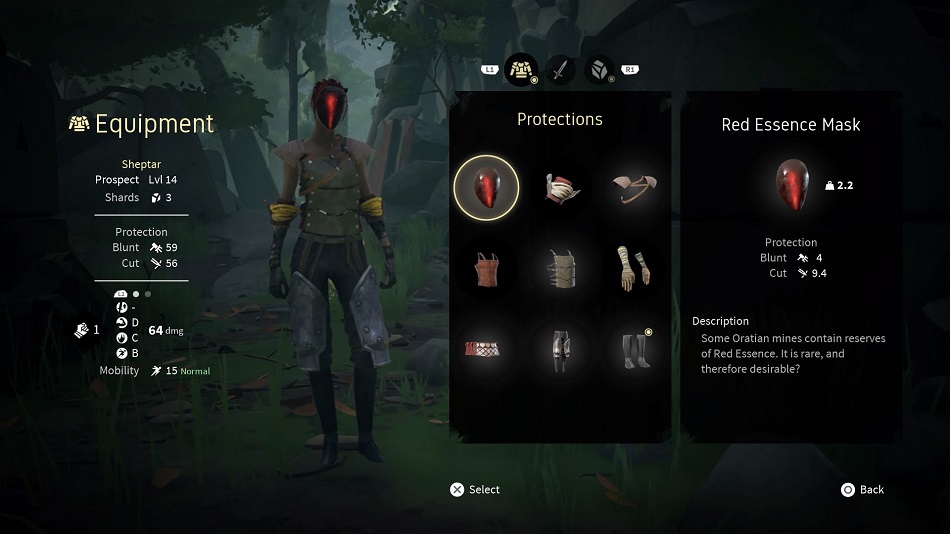 Brad: It’s a shame that the combat doesn’t amount to more than it does because I actually dig the aesthetics a great deal. Having everyone in a mask is pleasantly enigmatic, and playing dress-up with the various wraps, bindings and flowing garments leads to some iconic fight scenes… Or at least, they might be iconic if the game didn’t lean so heavily on group brawling.

Rather than going for stylish, skillful duels, Absolver frequently devolves into awkward mashfests as the player struggles to deal with two, three (or more!) opponents at a time, undercutting any elegance that might be found when using the combat system in a more intentional way. Unfortunately, I found that most fights were just struggles to shift the targeting cursor back and forth between threats while getting struck from whatever side I wasn’t focused on.

Despite its numerous issues, I might not have lost patience with Absolver as quickly as I did if it wasn’t for the misguided level design. Sloclap sets the adventure in a series of labyrinthine, confusing areas that serve no purpose — there’s practically nothing to find and no reason to explore. (Yes, it’s another misappropriated cue from Souls.)  Without relying on linearity, it takes a deft hand to craft environments distinct enough for players to recall landmarks and navigate without a map. Few developers can pull it off, and Sloclap is not one of them. I spent far too much time wandering around levels that look identical to each other with no guidance where to go.

Mike: I did eventually find my bearings, and the entire game took me less than five hours to complete, after which I was told in no uncertain terms to go back and continue training with other players – this is obviously meant to be the true hook of the game. Unfortunately, the co-op functionality isn’t working properly at this time. While Sloclap will probably get the servers stable eventually, the fact remains that Absolver’s core combat feels so awkward and unsatisfying that I can’t imagine it ever taking off. I certainly can’t recommend it now, and I doubt that’ll ever change. Rating: 4 out of 10

Disclosures: This game is developed by Sloclap and published by Devolver Digital. It is currently available on PS4 and PC. This copy of the game was obtained via publisher and reviewed on the PS4. Approximately 10 hours of play were devoted to the game in the online ambient multiplayer mode (combined between Brad and Mike) and the game was completed.

Parents: According to the ESRB, this game is rated T and contains Violence. This game is all about performing martial arts on others. However, it’s not bloody or gory, there’s no sexual content, and there’s almost no dialogue whatsoever. It’s pretty harmless, as games go.

Deaf & Hard of Hearing Gamers: The few lines of dialogue are subtitled and there are no auditory cues needed for play. The online interactions aren’t even a problem as there’s no voice chat, just communicating through visual emotes. It’s fully accessible.