Listen to the Big Guy 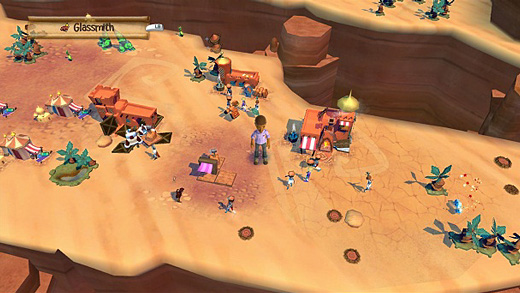 LOW Overlooking a Kefling with a message and getting stuck for half an hour.

WTF There's still no "everybody stop everything right now" function?

Family-friendly games that are both smartly constructed and interesting enough for adults are few and far between. As a parent who greatly enjoys playing video games with my children, the scarcity of such titles is both depressing and frustrating. However, there are a few titles out there that do fit the bill.

One such game (available on Microsoft's Xbox Live Arcade Service) was the well-received A Kingdom for Keflings. Featuring non-violent constructive play easily approachable to both large and small hands, it was a favorite at my house. I am quite pleased to say that the sequel is now available, and it's better than the first in every way.

For those that missed Kingdom, the newly-arrived A World of Keflings

takes the player's XBLA avatar and drops it into a land of little people—the titular Keflings. The player is the biggest, strongest (and presumably smartest) thing around, so it falls to "the giant" to lead the populace toward enriching civilization with buildings and services. The campaign caps off with the ultimate goal of building a castle for the king.

Within each of the game's three areas, there are plentiful amounts of things like wood, stones, crystals and sheep to be harvested—essentially, the gameplay is a very streamlined, modified form of resource management that will be quite familiar to anyone who's ever played a real-time strategy (RTS) game.

Avoiding confusing menus or the standard interface problems that crop up with RTS-style console efforts, the player instead physically picks up a Kefling and takes them directly to what is to be collected. After the Kefling gets the idea, then the player takes them to where the resource should be dropped off (a lumber mill, a rock carver, and so on.) At this point, the player is free to direct her attention elsewhere as the little person will continue to shuttle back and forth accumulating raw materials until new orders are given. It's extremely straightforward and easy to grasp. 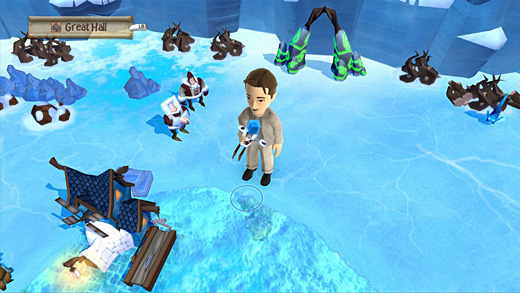 Once a sufficient number of Keflings are given employment, wool bundles and cut planks start piling up, so the player chooses from a series of blueprints to build different structures. Things like houses, stonecutters, woodcarvers, and so on. Feed the proper resources into the proper workshop, and new types of materials start cropping up. Take these materials and build more intricate structures, and watch the World grow ever outwards.

Although it initially seems to have much in common with other games in the RTS genre, the unique thing about Keflings (apart from the brilliant interface) is that there are no negative dynamics to contend with: no enemies to defend against, no hurricanes or earthquakes to ruin urban development, and no penalties of any sort. Further reinforcing this "no harm, no foul" approach, resources are infinite and allow players to make an unlimited number of mistakes without ever having a Game Over.

While it may seem somewhat boring to imagine a game where there's nothing to struggle against, I found that the time spent arranging harvesting routes and planning how to maximize available space was extremely relaxing and mellow. It's this quality that makes A World of Keflings such a great title for children, as well; games in general suffer no shortage of aliens, guns or bloodthirsty monsters, but titles that remove the element of danger while encouraging fearless experimentation are in short supply.

In comparing Kingdom and World, it's a fact that both games are extremely similar in terms of structure and design. However, there have been a substantial number of tweaks and upgrades that make World a more pleasant and player-friendly experience by far.

For example, the player now has a group of helpers to perform menial tasks and cut down on repetitive back-and-forth travel. Blueprints for buildings are now easier to read, and give visual cues that specify exactly which parts are needed for construction. Each class of workshop is color-coded to reduce confusion, and there is a free-to-use hint system which tells the player exactly what to do if they can't figure out how to further the mission. Nearly every rough spot or sticking point from the first game has been smoothed over, making World an enjoyably painless, irritation-free game to play.

It's extremely seldom that I get through an entire review without pointing out any negatives of significance, but A World of Keflings

is one of the lucky few. With its uniquely approachable structure, highly-polished details, and a laser-sharp focus on fulfilling its own premise, it's a title that I'm glad to recommend to both adults and children alike. Rating: 8.0 out of 10.

Disclosures: This game was obtained via publisher and reviewed on the Xbox 360. Approximately 8 hours of play were devoted to the single-player mode, and the game was completed. 30 minutes of play were spent in multiplayer modes.

Parents: According to the ESRB, this game contains mild cartoon violence. Nothing to be afraid of here, moms and dads. There's no combat, no blood, no language, no sexual situations, and the only "violence" on display is when the giant gives a small kick to one of the Keflings…they give out a small yelp, but they land unharmed. It may be a little complicated, but the content is suitable for even the youngest kids.

Deaf & Hard of Hearing Gamers: There shouldn't be any problems. There is no spoken dialogue, and all information is presented through text on-screen. No audio cues are necessary for gameplay whatsoever. Totally accessible.