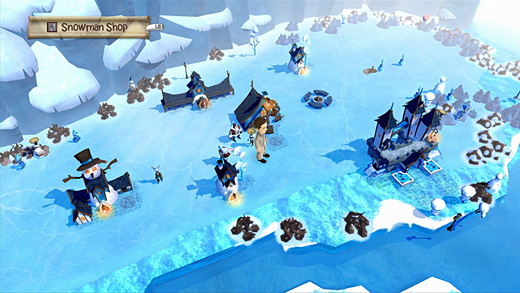 I haven't had a whole lot of time to devote to straight-up gameplaying. What little time I have had has been going to A World of Keflings on XBLA, and it's been time well spent. I'm working on a review for it at the moment, but I haven't rolled credits yet.

In the meantime, I can say that it is better than the original (A Kingdom for Keflings) in every way, and is a pretty outstanding choice for family-oriented gaming. If you're even remotely interested in the demo or the subject matter, it's basically a no-brainer purchase. Kudos to NinjaBee for another winner.

Otherwise, I've only been getting in little snatches of time with Monster Hunter Freedom Unite. The oldest and I have been teaming up with has been great (local co-op with two PSP's) and I am slowly, slowly, slowly but surely driving on towards the end of the single-player campaign.

At this point I have passed the 100-hour mark, and the fact that I'm still playing it definitely says something about both the quality of the game and the OCD-ness that can strike me when I find the right material.

In other games news, I'm glad to say that my 2010 Top 10 is essentially done. With only a few weeks left in the year, I'm pretty confident that nothing else is going to shake up the current ranking I've assembled. While on the topic, it's also worth mentioning that we have just chosen its Game of the Year for 2010, and it will be announced at the end of the next podcast. It's already recorded and in the can, only awaiting a few final edits before it goes live.

It might be a somewhat controversial pick, but I can say that I am satisfied with what came out on top.