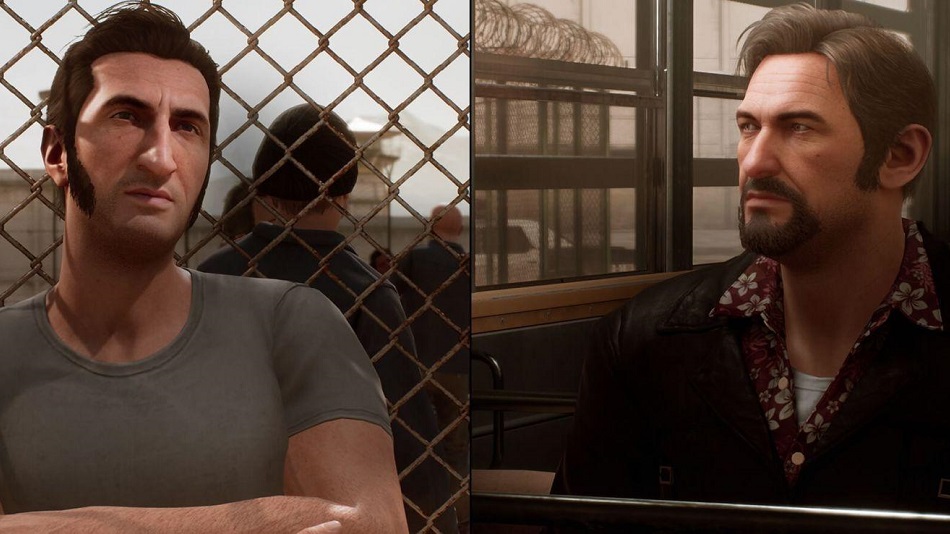 HIGH Exploring this kind of dedicated co-op is an exciting thing.

LOW The gun-heavy focus of the endgame areas.

WTF The story twist and railroaded final sequences were awful.

I guess the ‘sophomore slump’ really is a thing. After an incredibly strong debut with Brothers: A Tale of Two Sons, I couldn’t have been more excited to get into director Josef Fares’ new project, titled A Way Out. But now, after completing it? It whiffs on so many levels that it’s hard to tell it came from the same creator.

The premise is an interesting one – while Brothers had a single player controlling two characters at once, A Way Out is a dedicated cooperative experience that requires two live people working as a team in order to play. While this may sound like a barrier to entry, there are a couple of great options. The first is local couch co-op. The second is that purchase of the game includes a “pass” to let a second person play online for free. While some pubs might have tried to leverage this co-op dynamic into forcing multiple purchases, they were smart to avoid that route.

The setup here is promising — two characters meet in prison. One is older and wiser, and the other is a younger hothead. Coincidentally, they’ve both been wronged by the same crime boss who’s still on the outside, so they decide to work together to escape and seek justice. So far so good, but once my partner and I got into it, A Way Out was nothing but a series of disappointments.

The issues start at a fundamental level — there just aren’t many times when it feels like the cooperation is interesting or vital. Tasks are simplistic, bordering on busywork. There’s nothing compelling about requiring both players to lift a fallen wooden beam blocking a door, or one mashing the square button on an elevator to ferry the other across a gap. Ostensibly, the devs wanted the action to be approachable and to avoid the frustration of one player holding the other back, but the downside is that the actions are flat and uninteresting. (And don’t get me started on the car chase sequences or shootouts, both of which were unwelcome and clunky.) 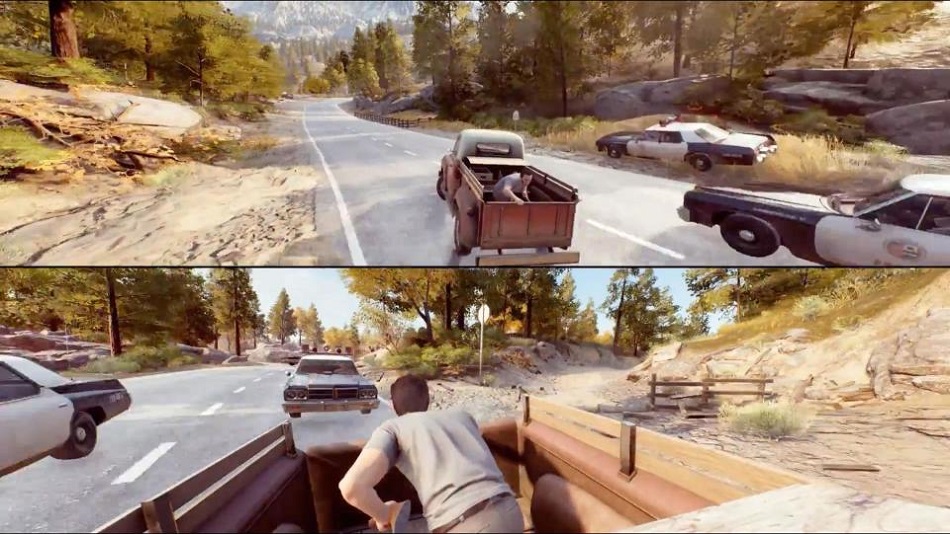 The basic nature of gameplay might not be a problem if the story and scripting were better, but A Way Out feels like a predictable, cheesy, cliché-ridden action movie from the ‘70s that fails to generate emotion or excitement.

For example, Brothers delivered its touching themes through actions and non-verbal communication – nothing more than gestures and expressions. At the time, I didn’t realize what an advantage not having dialogue was, but when compared to the boilerplate script and boring conversations in A Way Out, it seems like Fares dodged a major bullet his first time out.

If I gathered a group of people and asked them to brainstorm lines for a generic prison movie, the accumulated list would be what’s here. Both of the characters are stereotypes, the antagonist is Nondescript Bad Guy, and the exchanges in each scene are so bland that they could’ve been taken from any ‘tough guy’ TV show or genre film from the last few decades. The voice acting is also poor. While both characters have odd deliveries, the younger character’s is especially noticeable – it’s like someone from another country is affecting an American accent, but they can’t nail the cadence or intonation.

The presentation in A Way Out is baffling. When I started my review the servers weren’t turned on, so the only way to play was couch co-op. In this mode, the game is displayed in splitscreen, as expected. When the servers went live and I was able to try it connected on two separate consoles, I was stunned to find that the game stayed splitscreen. If it was optional when playing online, it would be an amazing nod towards accessibility. But as the only way to play? It’s problematic. 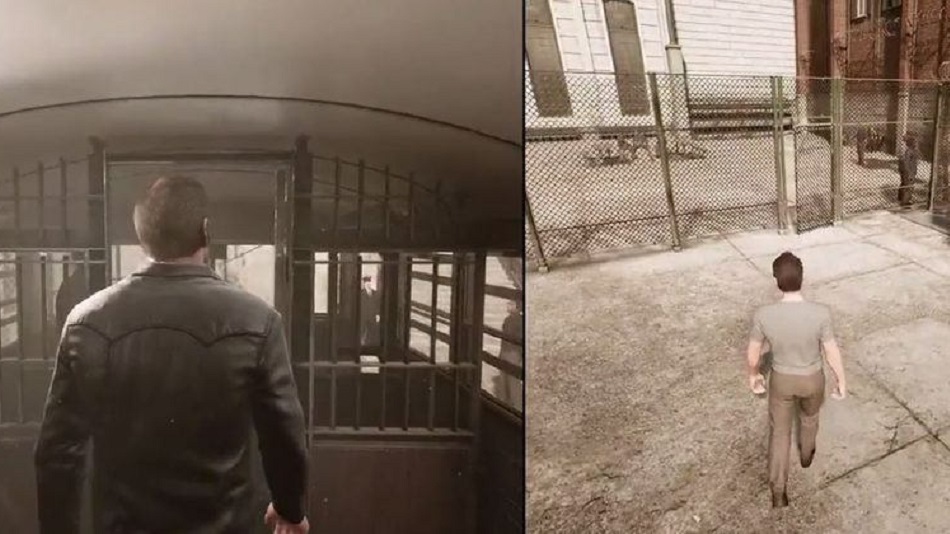 Part of my issue is that in splitscreen, each player sees what the other does, reducing the need for communication and coordination. When one prisoner is chipping at the mortar behind his toilet, the other is looking out the bars to keep an eye out for guards. However, the player doing the chipping can see the guards on their partner’s half of the screen, so there’s no need for the second person to warn them. Later, when one character is having an emotional heart-to-heart with his wife, the other sees the whole thing, despite being nowhere near.

I can’t help but think an opportunity was missed here. Actually requiring players to communicate with each other to get past obstacles and coordinate actions would’ve made for more tense, compelling experiences and close calls. Further, it would create opportunities for one player to fill the other in if they weren’t present for a story scene, and there would also be real motivation to replay as the other character in order to see what they weren’t privy to.

As A Way Out comes to its conclusion, a twist crops up that affects both the story and the gameplay. I can’t reveal it here, but it flew in the face of what felt appropriate, and both players have almost no choice in how it unfolds. My partner and I were both frustrated that we couldn’t end the game in a way that made sense to us, and the devs’ attempt to shoehorn us into a certain state of mind felt both unearned and inelegant. I won’t say any more except that the plot ends on the worst possible note, and it feels like a misguided attempt to generate the same intense emotion that many felt at the end of Brothers. This attempt does not succeed.

While I enjoy the idea of dedicated co-op and I’m excited to see someone exploring the space, it doesn’t feel like A Way Out trusted itself or its players to do so – the gameplay is simple to the point of being bland, the script is too predictable, and its efforts to evoke emotion feel cheap. It might be fine to play with a friend over a weekend, but it will be forgotten soon after, and it’s a shame. If it had aimed higher than having two people push buttons in unison while listening to corny lines, it could have been an amazing thing. As it stands, it’s a hesitant half-step towards an experience that isn’t there yet. Rating: 4 out of 10

Disclosures: This game is developed by Hazelight and published by EA. It is currently available on PS4, XBO and PC. This copy of the game was obtained via publisher and reviewed on the PS4. Approximately 6 hours of play were devoted to the single-player mode, and the game was completed. Be aware that the game only functions in multiplayer mode with a partner, there is no solo mode.

Parents: According to the ESRB, this game is rated M and contains Blood, Intense Violence, Nudity, Sexual Content, and Strong Language. The ESRB’s official description is as follows: This is a third-person cooperative action game in which two characters team up after meeting in prison. Some tasks/situations require players to engage in firefights using machine guns and sniper rifles; these sequences are accompanied by realistic gunfire and splashes of blood. One sequence requires players to torture a man tied to a chair: players use a variety of implements (e.g., nail gun, pistol, electric cables) to obtain information from the captive; screams and occasional blood-splatter effects may accompany electrocution or gunshots. The game contains some sexual material and nudity: a couple having sex, as observed through a trailer window—loud moaning sounds can be heard, though the view is partially obscured; prison sequences briefly depicting male buttocks and genitalia. The words “f**k” and “sh*t” appear in the dialogue.

Deaf & Hard of Hearing Gamers: Subtitles are available for all dialogue, and when one character is prompting the other (“come over here” or “help me”) there are subtitles as well. All actions are related visually onscreen, and both players can see each other’s screens at all times. I did not notice any instances of audio cues necessary for successful play. I’d say this title is fully accessible.

Remappable Controls: Camera axes can be reversed and modified, but otherwise the controls are not remappable.

Just played this game with a friend. We had fun for all the wrong reasons. We kept laughing at how bad it was. After a while we basically played it ironically (as the kids say these days) like one would watch The Room with Tommy Wiseau. The scenario is that bad. I looked up reviews to see if others felt that way (because I only saw positive reviews before playing) and found yours as one of the only objective and well written reviews out there. Edit: PS, I only do not agree with your take on the voice acting. I… Read more »

While I haven’t played the game yet, I do like your suggestion about getting rid of splitscreen and requiring players to communicate more with each other. Reminds me of a game idea I had a while ago where three players have to navigate through several obstacles while each is hindered in a certain way (one can’t see, one can’t hear, one can’t chat or type). Who knows; maybe this idea will be implemented in a future title.