It's no secret I'm a big fan of local nerd rockers Kirby Krackle. I love these guys. LOVE 'EM.

You should love them too.

If you've never heard their stuff, you can check out their website and listen to a ton of free music. While you're at it, check out their latest video, "Secret Identity":

Give a listen and become a fan.

The good folk at Atlus have priced a ton of PSN download titles at half-off. Persona 3, Riviera, Kenka Bancho, and Yggdra Union are all available on the cheap, among others.

If you've been intending to catch up on some of the quality in this back catalog, now's your chance.

Mike Dunbar over at Chronoludic has put together a pretty fascinating podcast about music choices and sound design, specifically in reference to Deadly Premonition and how it relates to Twin Peaks and Angelo Badalmenti.

It's a great, great piece and a sweet morsel for the ears. Take a listen right here.

Man-about-town @Batrock has posted a great book review of Richard Kadrey's "Kill the Dead" over at his site.

I can't say that I'm a great fan of Kadrey, but the breakdown of the work is an entertaining read and also serves my ulterior motive of increasing the Urban Fantasy profile at this blog. Don't tell, though… that's a secret. 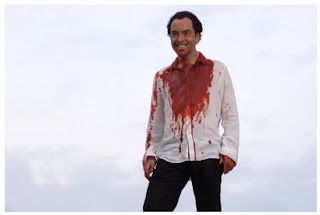 The BBC streak at my house continues—the wife and I just completed the Jekyll miniseries from 2007, written by Steven Moffat. This six-episode piece was a fairly fascinating thing, although quite unbalanced.

As you might expect, the tale was a modern-day update of the classic story by Robert Louis Stevenson. Without getting into spoiler territory, the show did a fairly neat job of connecting itself to that famous piece of literature, and the interpretation of the themes was well done.

Even better was the performance given by James Nesbitt. This is the first time I've ever seen him in anything, and his work was quite riveting. While the program did not resort to drastic makeup or special effects to portray the two sides of Jekyll and Hyde, Nesbitt drew a very clear line between them and fleshed out each personality effectively—especially as Hyde. The darker of the pair was a genius lunatic with superhuman abilities, and his barely-hanging-on mental state kept me on the edge of my seat. I genuinely felt as though he was capable of anything; a frightening monster you don't want to be near, yet one you can't look away from.

(Side note: I've heard that Nesbitt was heavily favored to become the next Doctor Who before Matt Smith was chosen. After seeing Jekyll, I'm inclined to think that he would've been a great choice, somewhat along the lines of Christopher Eccleston's edgier Doctor. I love Smith to be sure, but I think Nesbitt might have worked out all right if the choice had come to fruition…)

However, I can't say that the series finished as strong as it started.

The first three episodes were certainly action-packed and tense, and I caught myself holding my breath a few times. The dramatic buildup was fantastic, but then something odd happened… episodes four and five were essentially two hours of flashback storytelling filling in the Jekyll mythology, and I can't imagine the sixth and final episode satisfying anyone.

I think one of the biggest problems was that the writers ramped things up to such a ferocious degree in the first three hours that there really was no other place to take it. They needed the cool-down period of the flashbacks since that pace could not have been sustained. I understand that and have no problem with it (although two hours was a bit excessive) but where I do have a problem is the failure to rev things back into high gear for the finale.

As I stated earlier, Hyde is basically a black-tinged superman capable of incredible feats. It seemed like a safe assumption that the finale would have been pants-wettingly exciting, but instead, most of the hour was spent rather sedately. Worse, the final scene has Hyde in such a tightly-controlled situation that there really isn't any chance for him to shine in a visceral way, and this muted finish combined with the subdued pacing of the previous flashbacks meant that things cooled off in the middle of the series and never got going again.

I'm glad that I watched the series and I am still quite impressed with Nesbitt's work (especially in the first three episodes) but I can't help but wonder if the split personality of the series was some sort of meta-commentary on the part of the writers. Jekyll/Hyde, light/dark, action/cerebral… I think a pretty good case could be made that the division of three adrenaline episodes and three thinky episodes was a direct reflection of the subject—a neat trick pulled off by the writers, perhaps, but one that left me feeling more than a little dissatisfied at the conclusion.

I loved every minute. Can’t get enough of Moffat.
Maybe cos he got me young. I grew up watching Press Gang.
Next you have to check out Coupling(if you haven’t already).