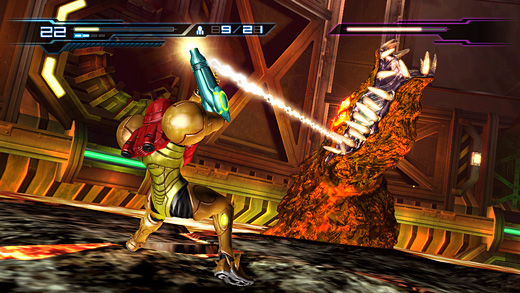 I've been in a bit of a holding pattern lately. I keep waiting for specific titles for review to show up, and… none of them do. Since I hate putting something on hold when a must-review game arrives, I've been burning through a bunch of random stuff in the hopes that the UPS truck will drop something off sooner rather than later. No such luck yet. In the meantime, here's what I've been doing… RAPID-FIRE STYLE!!!

My most recent piece just went up. Check out my Second Opinion of the notorious Deadly Premonition (360). Don't be surprised if you see it end up on my year-end Top 10 list. Seriously.

I ran through Sin & Punishment: Star Successor on the Wii. I'm not the biggest Treasure fan by any means, but it was fairly enjoyable and I liked much of the visual style. The story was complete nonsense and some of the sections were more difficult than I prefer, but I would definitely recommend it on the cheap, or as a weekend rental.

I popped in Metroid: Other M… and then promptly popped it right back out. I think I played something like two hours or so, and that was more than enough for me.

The voice acting was atrocious, and the cutscenes are ridiculously absurd. It's no secret that (dev house) Team Ninja has never been a model of gender equality in their designs, but I was quite shocked that Nintendo didn't iron out some of these "colorful" tendencies.

My distaste for the writing aside, the game design just makes no sense. I'm utterly baffled as to why the game uses only the Wiimote when the Nunchuk attachment is so readily available to most players. Using a 2D control scheme to navigate in 3D space? Not exactly the most brilliant idea. Pass.

I was gifted a copy of Toy Soldiers (XBLA) by an extremely benevolent soul who shall remain nameless, and I'm happy to report that I have at long last finally found a Tower Defense game that doesn't make me want to toss my controller through a window. Really, really enjoying it so far, and the art is fantastic. Totally recommend this to anybody. Plus, the developer (Signal Studios) is local… about 15 minutes from my house—score one for the home team! 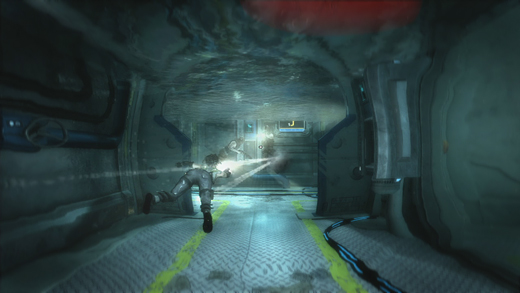 Spent some time with Hydrophobia, although not much. I can hardly think of a less enjoyable beginning to a game than being stuck in dark, complicated corridors with an unreadable mess of a map and an extremely sketchy camera. Add in some pointless Metroid Prime-style environment scanning to drag the pace of everything down, and it's a recipe for disaster. I have to seriously question some of the early review scores awarding it high marks…

Tried the DS version of Alice in Wonderland thanks to my friend @Zolos, and he wasn't wrong to suggest it. The art is nice and abstract, and the developers have come up with some nifty mechanics to match. I haven't spent a lot of time on it, but I really like what I've seen so far.

Played a bit of Left 4 Dead 2 with the wife in online co-op. This is the first time playing it for both of us (we ran through the original Left 4 Dead together and had a blast) but I have to say that things did not get off to the best start.

The mission we played (the mall) had fairly boring level design until we got to the main area of the shopping center, which went from boring to annoying. The task of collecting thirteen cans of gas for a racecar was a bit insipid to start with, but then our baby woke up before we finished.

Like I said, we were in the online co-op mode. We prefer to look at a full screen—splitscreen is great to have, but if the option for full-screen is there, we're taking it. Despite the fact that only two people were playing and both of us wanted to pause, we could not pause the game. That was bad enough, but as I was putting the baby back to sleep, the game registered us as "inactive" even though I was only away for a very short time. The server booted us, and we lost all our progress… needless to say, neither one of us was very happy with the game at that moment.

Tonight's events don't really inspire me with confidence, to be honest. Our baby doesn't usually sleep through the night, and if the game is going to boot us off the server every time we have to put him back to sleep, this is going to be an extremely difficult playthrough.

Last but certainly not least, I got a chance to spend some time with a pre-release version of Explosionade, from Mommy's Best Games. I can't say a lot about it except that I was enjoying the hell out of what I saw, and with this game launching at the insanely low price of $1.00, there's absolutely no reason in the world for anyone not to buy it. Really, really looking forward to getting my hands on the final version!

Castlevania got better! I was really enjoying it, and then it took the gloves off! Seriously, it just amped up big time, so I figured I’d urge you to push it higher up your stack of games to play. I will stand by the claim that this Castlevania game, while radically different, is totally in the spirit of Castlevania. There’s just no mistaking it by Chapter 3,4 and 5…and on, from what I hear. I’ll also have heard claims that the game keeps getting better and crazier. I’m beginning to believe it.

Thanks for thinking of me. = )

Castlevania is definitely on my list to play, but I’m not quite sure when I’ll get to it… hopefully sooner rather than later! I have been hearing quite a bit of varied response to the game, though. A few people I know have already quit it, and others have nothing but praise for it. A very hot and cold response, to be sure.

No idea how I’ll feel about it, but it’s on the radar!

Brad, I’m sorry you dropped Metroid: Other M. Don’t get me wrong; it’s only a decent game, but it was pretty fun. Anyway, it’s hard to argue when you have an avalanche of games to choose from. Still, it was worth my 11 hours. But to the point: pick up and give “Castlevania: Lords of Shadow” a whirl. Here’s why. I don’t recall exactly, but I believe your biggest beef with at least the first two “God of War” games was Kratos, and your inability to get behind him. The new Castlevania takes God of War’s combat, adds some interesting… Read more »