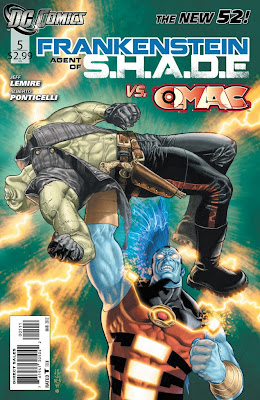 Frankenstein, Agent of S.H.A.D.E. #5 — I've got to admit, I'm really puzzled by this one. The idea of Frankenstein's monster (with a sword, no less) teaming up with a rogues gallery of assorted creatures seems like an absolute win, and that's even before mentioning that this book is written by Jeff Lemire. His work on Sweet Tooth and Animal Man is absolutely fantastic, and both have become recent favorites. His work on this book, however… I'm just not feeling it.

The characters don't have much personality, the action isn't very interesting or exciting, and the artwork doesn't click. The pencils by Alberto Ponticelli are decent enough, but everything has a sloppy, ugly look to it that gives each issue a cheap, tossed-off feeling. It's bizarre to me that I can be so captivated by Lemire's other work and feel absolutely nothing for this one, but there it is. I'll probably hang in for a few more issues just to give it time to breathe, but if I stopped reading it right now, I'd forget it even existed in an hour. 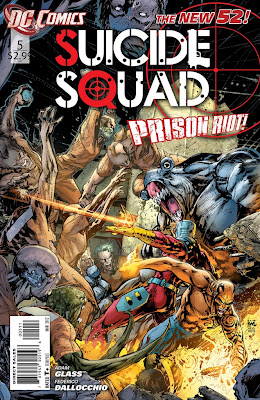 Suicide Squad #5 — I've praised this one before, and I'm praising it again. To recap: super-criminals are forced to work together to accomplish impossible missions. Everyone is expendable, but cooperating with their captors is their only hope of eventual freedom.

The action in each issue is enough to keep the pages turning, but the characters aren't ignored, either. An added layer of suspense comes from the fact that any member of the team can be killed at any time, and it seems as though no one has any problems doublecrossing anyone else. Also, one of the characters is a giant shark, so obviously, bonus points. 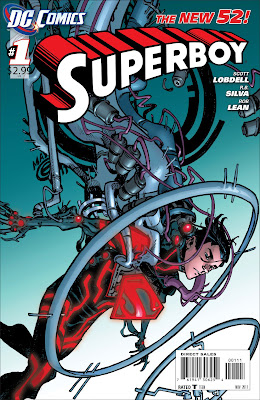 Superboy #1, 2, 3, 4 — I've never been much of a Superman fan, and I didn't jump aboard when he was "killed" way back when, so I'm not too familiar with the history here. However, Scott Lobdell has made it very easy for a non-fan to pick up the book and feel right at home.

The gist of this book is that this incarnation of Superboy is a powerful telekinetic clone created in an underground lab. His DNA is a combination of that taken from Superman, and at least one other person who is still a mystery. (If it turns out to be Lex Luthor, I'm going to be quite disappointed…)

Anyway, this Superboy has been bred to be an attack dog by some super-secret government agency, and he manages to break loose of his containment and starts to explore both his powers and his identity. This in itself wouldn't be all that interesting, except for the fact that he seems to be quite lacking in the morals department and comes off as a bit of an anti-hero. Thumbs up so far, and I've added this one to my regular pull list. 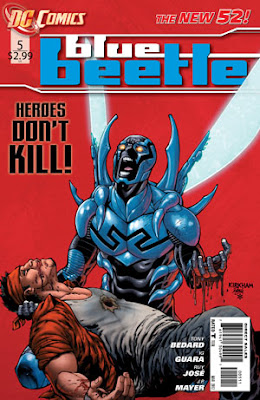 Blue Beetle #5 — This book is about a Hispanic boy who finds a damaged bio weapon and inadvertently bonds himself to it. The weapon tries to assert control of the boy's body, but he fights back and the two of them have to work together to overcome various super-assassins who are sent to recover the technology now inside of him.

I'm going to be completely honest here… the writing isn't that great, and the art is pretty decent, but it's nothing outstanding or particularly memorable. However, I've got a massive weak spot for stories about bio weapons. Don't ask me why, I don't know, but it's a concept that has always fascinated me and it's the only reason I'm reading this book. 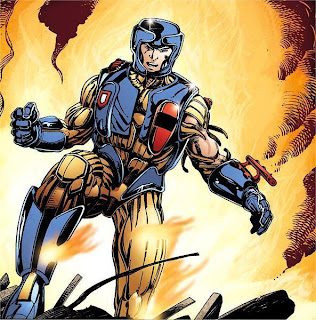 In related bio weapon news, I've heard whispers that XO Manowar is being prepped for a relaunch. I had great affection for that book back in the day, so let's hope that rumor pans out. 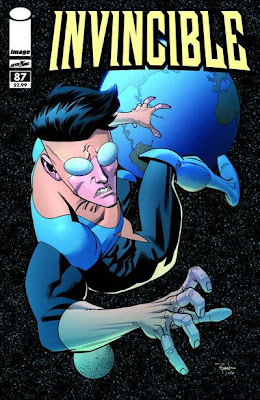 Invincible #87 — The story of Invincible is too long to tell in any coherent way here at the blog, but the best way to sum it up is to say that it's about a half-alien boy raised on earth, and who eventually becomes the planet's most powerful hero. I realize that may sound incredibly familiar to anyone who's ever heard of Superman, but let me just say that Robert Kirkman's writing has been funny, human, relatable, thrilling, and shocking. I've loved it since the first issue, and I still love it.

If you've never tried it, pick up the first trade paperback and see what you think. I'm betting you'll dig it.

Also, for no particular reason…. JEM and the Holograms! 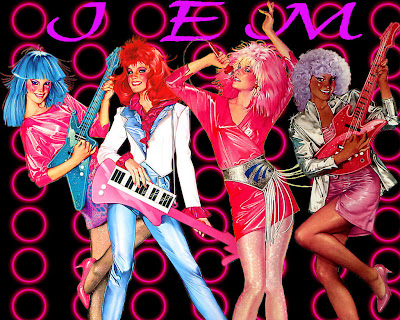 It kinda looks like John Bolton did that Jem and the Holograms image, but I can’t find a connection between him and the artwork on the Net. It appears that the rumor is true and Valiant Comics is returning in May. http://valiantentertainment.com/ I enjoyed XO as well, though only when Bart Sears was the artist. I’m picky about my artists. Though Barry Windsor-Smith did a great job too. Seems to me that the Superboy relaunch is really a honing of the original idea from the Death of Superman. Superboy was a clone of Superman with some tweaks since there were… Read more »