I happened upon this screenshot when surfing through some articles on game violence. According to the caption that came with it, this pic is from Postal 2 and the character is using a cat as a silencer. 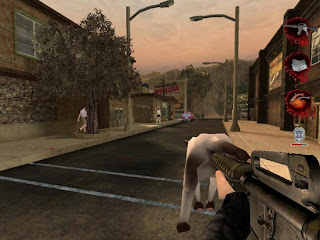 Funniest damn thing I've seen in a week. I think I may even frame it.

Although I haven't had a ton of game time lately, I took advantage of the extended weekend and spent some time with two download titles, Lit and Flower. 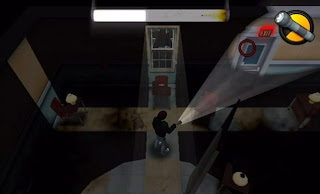 Lit is from Way Fordward (Shantae, Contra 4) and makes its home on the Wii. An intriguing mix of Puzzle and Horror genres, the game’s hook is that touching darkness or shadows is instantly fatal. Naturally, the player must make his way through twenty-five rooms (and five boss battles) by taking advantage of paths and safe zones created by lamps, televisions, broken windows, and so on. My review is in the can already and should be making an appearance soon, but in a nutshell I'd say buy it if the subject matter appeals to you, just be prepared for some frustration due to a few poor design choices. 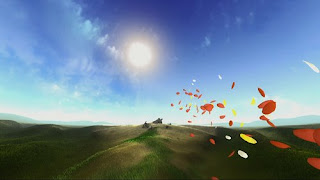 Flower seems to be on everyone's lips these days, and with good reason. Coming from ThatGameCompany (fl0w) it's no surprise that it's an extremely unconventional experience which defies most attempts at genre classification. For those who haven't played it, it's best described as something between an electronic poem and a brilliant deconstruction of what people expect from a videogame. I'm still sort of mulling over what I think of it, but without a doubt I am a fan. 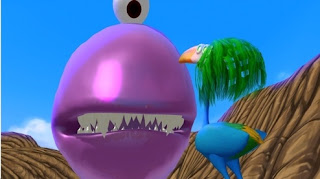 One last little games bit here: You may recall that The Maw released on XBLA a little while ago, and if you tried it, the odds are that you probably liked it. The folkss at Twisted Pixel put out word that the first of the three planned DLC add-ons (titled Brute Force) should be available tomorrow for the low, low price of $1.25. Be sure to check it out. I know I will.

My gut feeling is that only people who are already well-versed in video games will really “get” Flower. I tried to get the wife to play it a few times, and she had no interest at all… she seemed bored watching me, basically. I think the game has an interesting message and tells it in an engaging way, but I think it’s speaking in a language that will only be understood by a select few. Definitely not one for mass consumption, or even casual consumption, I’d say.

Both games are very interesting. Lit, largely because I like the light/dark gimmick. It was one of the things that drew me towards Luigi’s Mansion on the GameCube. Hell, it was probably the very thing that drew me to Fatal Frame and Siren. Flower though is one of the game experiences–and it seems that it can only be categorized as an “experience”–that it so unusual that you can’t help but take notice. One question I have though is the appeal. A lot of game people commenting on the game are saying things like “Flower could be that gateway game for… Read more »