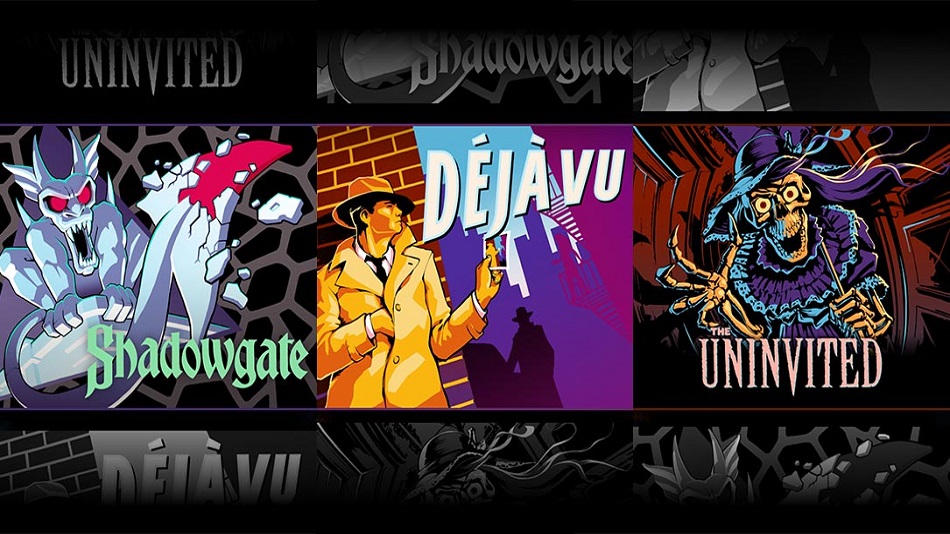 HIGH These games are exactly like I remembered – and still good.

LOW The maze in The Uninvited.

WTF Why no modern save state system or supporting historical content?

I was 13 when Shadowgate hit the NES in 1989, and at the time, it was like nothing else I had played. There were no fast reflexes required, no guns to shoot, and no platforms to jump. Instead, I was inside a creepy castle full of deathtraps and cryptic puzzles that tested my brain in a way that other Nintendo titles of that era didn’t.

I loved Shadowgate. Loved it. Once I had been through it more times than I could count, I moved onto its sister titles – 1990’s Déjà Vu and 1991’s The Uninvited. The three of them carved out a special place in my heart, and I have fond memories of them to this day.

Of course, those games came at a time when they had no competition on consoles, and when videogames as a medium were highly experimental, fresh and new. We’ve come a long way since then, and now that they’ve been reissued in the 8-Bit Adventure Anthology: Volume 1, I wasn’t sure they’d hold up. There was little doubt that my nostalgia would kick in and bring warm fuzzies with it, but I wanted to know whether they were still worth a damn to someone in modern times.

My youngest son is eight years old. He loves frantic first-person shooters and open-world titles where he can experiment with in-game physics. He’d never heard of Shadowgate nor the other two, and has never played a menu-driven point-and-click adventure. Sitting him down in front of this trilogy with a little parental guidance seemed like a fair test of its entertainment quotient.

While I had to explain the basic premise of a point-and-click adventure and how to play one via a cursor, menu options, and pixel-perfect accuracy when selecting things onscreen, it didn’t take him long to get comfortable. To my surprise (and delight) he was happily on board before I knew it. In fact, he was more than on board… he was into it. However, to be fair, it’s tough to recommend any of these three as something that anyone can jump right into and enjoy, whether they’re eight years old or not. 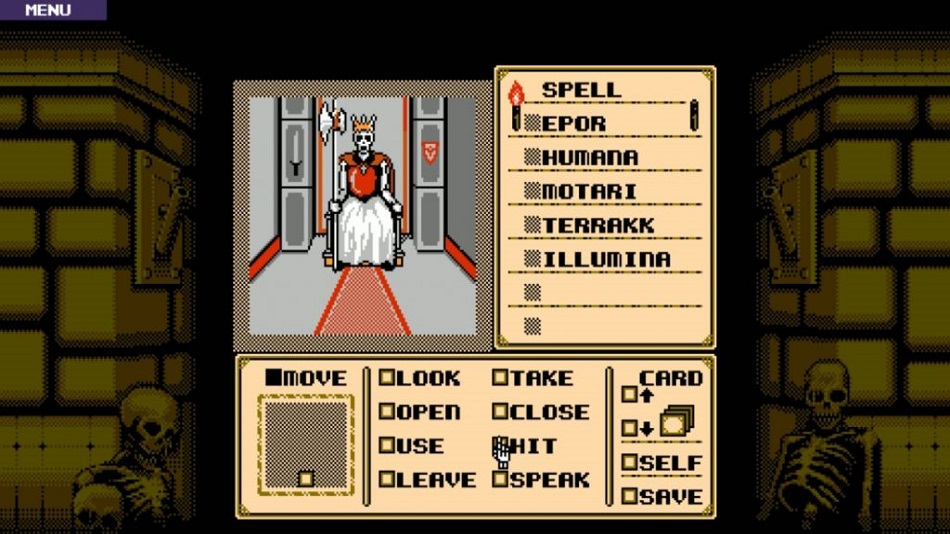 For starters, some of the logic required is absolutely inscrutable. Certain things are obvious and can be pieced together (like putting a match to some wood) but anyone coming to the Anthology can expect to die over and over and over again — there’s no way to predict what innocent-seeming actions will lead to the player’s demise. Having a walkthrough handy will grease the wheels when things grind to a halt, and they will grind to a halt. While I generally frown on games that require online help, it’s hard to be too upset about it here. Devs have learned a lot about what makes for a fair challenge in the years since these games debuted, so some allowances must be made.

Technically, the games present exactly as they did on the NES, with ancient graphics and sounds intact. While I’m fine with reproducing classic production values, it was a little disappointing to see that the people behind this reissue have not implemented modern save states similar to those found in most current retro offerings. The games reload just a screen or two prior to the player making a fatal error so it’s not a huge deal, but adding modern amenities wouldn’t have been amiss.

It’s also a bit of a bummer to see that no archival or historical info has been added. It would have been a nice touch to learn a little about the background of these titles, but no such thing is available.

Regardless of those omissions, once we had a walkthrough pulled up on my phone and he acclimated to pointing and clicking instead of moving an avatar around in 3D space, the simple graphics, beep-boop sounds, wacky logic and unpredictable deaths didn’t phase my son at all. He was totally engaged reading each little bit of text as he poked his way around every environment, exploring from room to room and testing the limits of what was possible. Every new scene drew him deeper and deeper into the kind of mental adventure that these games offer, and every solved puzzle was a clever victory whether we used an FAQ or not.

Shadowgate, Déjà vu and The Uninvited are obtuse, they’re rough to look at, and finding answers online is required, but their charm and atmosphere certainly carries through, even after so many years. Picking up all three of these classics for eight dollars is a no-brainer, but the quality time I had introducing these to my son was priceless. Rating: 8 out of 10

Disclosures: These games were originally developed by ICOM Simulations and this reissue is published by Abstraction Games. It is currently available on PS4, XBO, and PC. This copy of the game was obtained via publisher and reviewed on the PS4. Approximately 6 hours of play were devoted to the single-player mode, and two of the three games were completed, although all three have been finished by the reviewer on NES too many times to count. There are no multiplayer modes.

Parents: According to the ESRB, this game is rated E10+ and contains  Mild Violence, Alcohol Reference, and Simulated Gambling. Ironically, I’d also include a warning for creepy imagery and perhaps a slight warning for blood? There are a few scenes which — while not explicit — were a little freaky to my son. The general atmosphere can also be a little unnerving to little ones, so either sit with them while playing or let older ones tackle it.

Deaf & Hard of Hearing Gamers: All dialogue comes via text and there are no audi cues necessary for gameplay. It’s fully accessible.