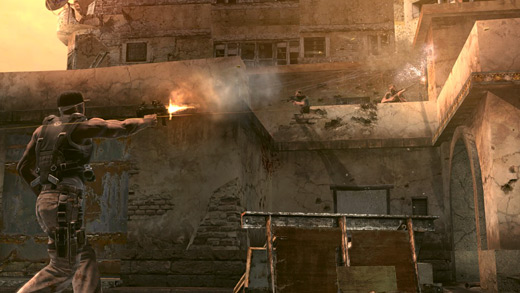 LOW How quickly the game falls into stolid repetition.

WTF The entire story, pretty much.

It's not that I dislike him, it's just that he's not an artist that I listen to or follow. He's simply not on my radar. In fact, the only things I really know about him are that he's a very successful rapper, he's muscular, he's been shot several times and survived, and that he is somehow connected to VitaminWater. (…Which I don't drink.)

Now that I've laid all my cards on the table, I think it's fair to say that anyone who is a 50 Cent fan will likely get a little more out of the Blood on the Sand experience than I did. Barring that, my guess is that this latest game starring Curtis Jackson's alter-ego will probably leave most players like myself fairly unimpressed.

Best described as a third-person shooter (think Gears of War lite) starring you-know-who and three members from his real-life crew, the game's story is a bit of nonsense about going after a diamond-encrusted skull as payment for a concert given in a fictional version of the Middle East. It's thin and forgettable, and honestly, it's just an absurd pretense for getting Fiddy in the thick of things. I'm not exactly complaining, though. There's no way a game like this could ever be taken seriously, so going bizarre was the right move. In this vein, I will say that the sheer incongruity of playing as a rap star in such circumstances is so off-kilter and outrageous that the seeming clash of elements accounts for a large part of the title's appeal. It's nuts. It's kooky. The concept itself is so crazy that it's a winner.

The actual execution? Eh, not so much.

Don't get me wrong, Blood on the Sand isn't terrible by any means, it's just sort of… there. Gangsta-in-the-desert premise aside, the actual gameplay isn't anything that hasn't been done better elsewhere. Run and gun or stop and pop, take cover behind objects, tear through war-torn urban locales—this isn't exactly groundbreaking stuff. It's all handled competently enough, but there's nothing to recommend it besides the star power of Mr. Cent, though the opportunity to go through an entire campaign co-op is certainly something to put in the plus column. It's unfortunate that the opportunity to buddy-up gets phoned in with an over-reliance on mundane things like using your partner to open doors or to climb to higher areas, but it's still appreciated.

Although Swordfish Studios does a not-disastrous job with the project, there's no getting around the fact that it's just a higher-profile also-ran. The graphics aren't the best, the gameplay isn't that fresh, and there aren't any original ideas or even an attempt at originality on display. Firmly set within well-established templates, Blood on the Sand is built squarely on 50 Cent tearing it up in a dry climate. If that works for some, then great. Players looking for something more substantial should probably search elsewhere.

As for me? Although I got a few good laughs out of the first hour or so, the appeal of calling men in turbans "bitches" while plowing through repetitive environments ran out long before the credits rolled. I walked away from the game bored and left it unfinished, having no regrets. A few hours later, I could hardly remember that I had spent time with it at all. Rating: 5.0 out of 10. Totally average.

Parents: According to the ESRB, this game contains Blood, Drug References, Intense Violence, Strong Language, and Suggestive Themes. Would you let your kids listen to a 50 Cent album? If so, shame on you, and shame on you again for thinking that this game might be even remotely appropriate for young ones. It's not. Tons of firearm combat, graphic violence, loads of profanity… all sorts of stuff that kids might like, but that they shouldn't have access to. The "Mature" rating in this case is well-deserved.

Deaf & Hard of Hearing: You can turn on subtitles for the major portions of dialogue, but the in-game taunts (which are purchased at the shop) are not subtitled in any way, nor are the helpful audio prompts given by the in-game partner. Although the game presents a wealth of on-screen tips for the player to help keep players informed, these bits of chatter really should have been captioned. Otherwise, it plays like any other third-person shooter, with all that entails.